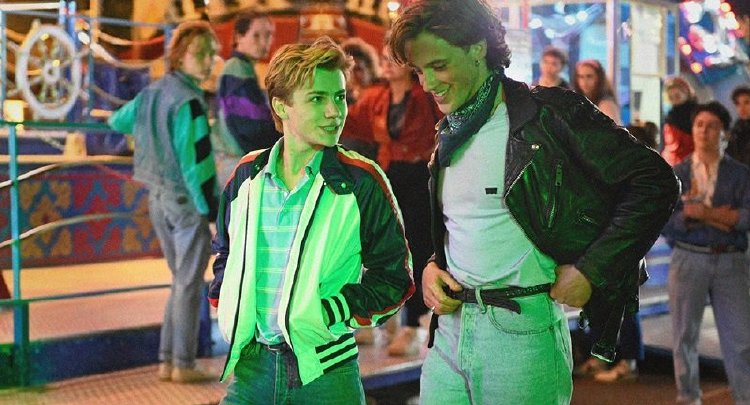 In his race to reach the shore of Normandy's Le Tréport and beat an incoming thunderstorm, 16 year-old Alexis (Félix Lefebvre) exacerbates his problem by capsizing his sailboat.  Along comes the older, good-looking David (Benjamin Voisin) to tow him in and plunge them both into a six week romance that will end in tragedy in the “Summer of 85.”

In adapting the Aidan Chambers novel 'Dance on My Grave,’ prolific writer/director François Ozon elicits fine performances in a striking location in service to an unsatisfying narrative.   As voiced by Kate (Philippine Velge), the English au pair who inadvertently comes between the two teens, this is more a romance of wishful thinking than true love and the teased out legal drama from which it flashes back promises more than it delivers.  Alex reels us in talking about his interest in ‘Death with a capital D’ as opposed to his fear of corpses and the corpse he will meet as he tells his tale.

The coastal town of Le Tréport is dramatically backed by white cliffs (France’s side of England’s White Cliffs of Dover) and fronted by a sandy beach, its winding streets dotted with picturesque homes and tourist shops.  One of these is run by David’s widowed mother, Madame Gorman (Valeria Bruni Tedeschi, "Saint Laurent"), who strips the embarrassed Alex of his wet clothes beside the extravagant bath she’s run, before preparing an elaborate snack for the boys after their initial adventure.  It’s a Gorman charm offensive that makes even the smitten Alex cautious.

When he returns home, we can see the vast difference between the boys’ backgrounds, the younger, wealthier and hipper Gormans contrasted with Alex’s older, more provincial working class parents.  This impression will be somewhat upended by film’s end, the Robins’ (Isabelle Nanty, "Amélie,” and Laurent Fernandez, both excellent) reaction to ensuing events and revelations more compassionate and open-minded than Madame Gorman’s rather inexplicable one.

David is the aggressor in a relationship which moves quickly, including into the bedroom for a night Alex describes as the best of his life.  Soon Alex is working in the Gormans’ shop and being sworn to an oath he’s not really comfortable with – that the survivor will dance upon the first one to die’s grave.  The first sign of trouble, David’s concern for a drunk young man’s safety, isn’t readily apparent, Alex’s disdain seeming cruel until we stop to ponder his comment about the young man’s face, a visage similar to his own.  It’s Alex who first meets Kate, a nice young woman eager to use her French, but when she approaches him on the beach when he’s with David, David’s attention refocuses to the opposite sex so swiftly, it’s unsettling.

Ozon frequently cuts back to the present day where Alex’s guidance councilor, Monsieur Lefèvre (Melvil Poupaud, "By the Grace of God") , is trying to get him to talk about what happened, as is case worker Miss Martin (Aurore Broutin).  Alex is about to go on trial and he’s been accused by Madame Gorman – but for what?  This ‘mystery’ teased throughout amounts to very little.  Better are the reactions of secondary characters and a satisfying final scene.

The period is defined by soundtrack choices like The Cure's 'In Between Days," Rod Stewart's "Sailing" and Bananarama's "Cruel Summer" as well as David’s laid back cool, feathered hair, gold hoop, Italian horn necklaces and denim vests.  The cast is solid, young Lefebvre’s confusion and heartbreak palpable, but Ozon’s twenty-first feature is one of his lesser efforts.

16-year old Alexis (Felix Lefebvre), who insists he be called Alex, is at loose ends at a summertime seaside resort in Normandy, France. Taking a friend’s sailboat out on his own one day, he runs into rough weather, causing the boat to capsize. Luckily, he is rescued by David (Benjamin Voisin), 18 years and one month old, and Alex may have found his new best friend in the “Summer of 85.”

The film begins with a voiceover by Alex telling his story “about a corpse I knew when alive.” Then, in flashback, the sailing accident and rescue by David happens and new BFFs are born. What transpires is a coming of age story in the sun-drenched locale of a French resort town and a teen at loose ends.

The fortuitous rescue becomes an invite to David’s home where Alex meets his new friend’s mom (Valeria Bruni Tedeschi), who insists that Alex take a bath. No problem, until she insists on helping him undress– it is not like she hasn’t seen it all before – and, unsure what to do, he lets her. (A very funny and awkward moment.)

The idyllic budding summer romance with David begins to show cracks when, first, Alex has to cover for David with his mom when he comes home, drunk, at 4AM. Soon, David’s nice guy façade fades and his true colors are put on display. Their days together end in a quarrel and Alex leaves. Later, he sees a news report on a traffic death and recognizes his friend’s motorcycle at the scene. Alex’s life will change, and not for the best.

The story, told in flashback, chronicles the idyllic summer that goes awry for Alex and changes the direction of his life. The two main characters have good chemistry together, though I think we see David’s true colors before Alex does. The teen angst is well-played by the young stars while David’s mom provides the silly but still funny comic relief.

Oddly, I think of this sun-soaked romance and drama as a companion piece to Disney’s animated comedy, “Luca.” It must be the summertime, southern Europe teen vibe that makes me think that.