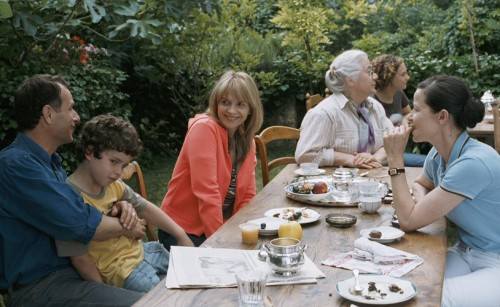 Paul Berthier was a famous artist revered by his niece Hélène (Edith Scob, "Brotherhood of the Wolf," "The Man on the Train") who has spent her entire life supporting his art and maintaining his priceless collections. On the occasion of her 75th birthday, her three children and their families gather for what they do not know will be the last celebration at the home that holds more memories than objects d'art. This is the family's "Summer Hours."

Writer/director Olivier Assayas ("Irma Vep," "Clean") delivers his richest film in years with the forgettably titled "Summer Hours," an astute study of intra sibling relationships magnified by inheritance issues and the globalization of modern life. The film is made more piquant still by being set against an idyllic, old-fashioned family country home whose matriarch doesn't exactly fit the notion of old-fashioned family values. Hélène has been depressed of late, housekeeper Éloïse (Isabelle Sadoyan, "Embrasse-moi," "Blue") tells concerned eldest son Frédéric (Charles Berling, "Demonlover," "The Man of My Life"), a local economist whose latest book debunking economy as science is about to be published. Clearly their maman is pleased to have her family gathered, but it is also tiring her out and Frédéric is disturbed when she insists on discussing arrangements for her death. Not only are there Uncle Paul's famous paintings and unpublished journals, but pieces from his famous artist friends - paintings, panels, vases - and museum quality furniture pieces. Middle daughter Adrienne (Juliette Binoche, "Dan in Real Life," "Flight of the Red Balloon"), a minimalist designer for a Japanese department store who lives in New York, has no use for antiques, but there is that silver tray she once dreamed about. Youngest son Jérémie (Jérémie Renier, "The Child," "In Bruges") is an executive with Puma, who manufactures sneakers in China, which Adrienne finds disturbing. When they all depart, they hope to reunite with their mother in San Francisco, the first stop for a retrospective tour of Berthier. They do, but when we next see them, they have gathered for the funeral of their mother and their reminiscing begins to define them - Frédéric as the sentimentalist, Adrienne as the keeper of the peace and Jérémie as the pragmatist. There's something wonderful about how Assayas lets us know Hélène will die just by the way Éloïse finds her after the family departs - sitting alone in the dusk - and yet we learn absolutely of her death only after Frédéric leaves a chat show and heads for a funeral home. There is a sharply written conversation among the three siblings in which we go from denial to absolute conviction in three steps about the reality of their mother's relationship with their uncle. A meeting with an estate lawyer also serves to define these three. The broker, Michel Waldemar (Jean-Baptiste Malartre, "Les destinées," "Demonlover"), who works with them sets the family pieces for sale and we are astonished how these things that, jumbled together, formed a home now appear so differently. He wants to restore the broken Degas plaster Hélène had stored in a plastic bag, thinking it worthless ever since it was broken by the three children's horseplay and we see that it is a perfect symbol of both the family's past and present. Assayas comes full circle with his family manse when Frédéric's teenaged children, Sylvie (Alice de Lencquesaing, "Water Lilies") and Pierre (Emile Berling, "A Christmas Tale") finally take an interest in it after its sale. Contrast this with the regret he and Jérémie express over the loss of Éloïse versus their eventual actions. "Summer Hours" is a wise reflection on not only how we deal with loss, but how our own sensibilities uniquely define what it is that is lost.