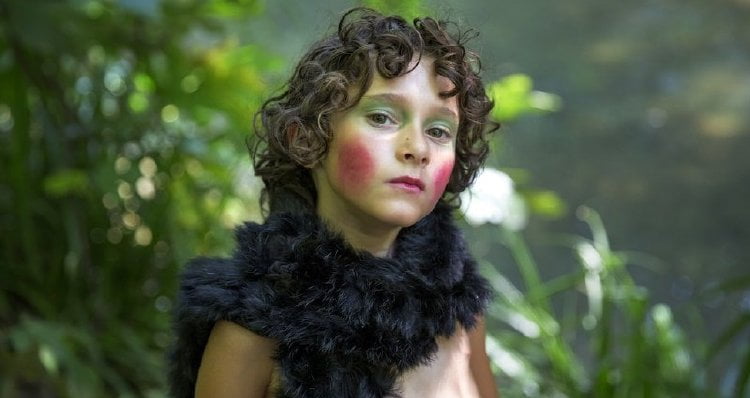 In Barcelona, Frida (7 year-old Laia Artigas) watches as the life she once knew is packed into boxes. Her mother has died and her grandmother (Isabel Rocatti), grandfather (Fermí Reixach) and Aunts Lola (Montse Sanz) and Àngela (Berta Pipó) wave as she rides away with her mother's brother Esteve (David Verdaguer) and his wife Marga (Bruna Cusí) to their country home in Spain's Catalonia region in "Summer 1993."

Cowriter (with Valentina Viso)/director Carla Simón won the Best First Feature Award at 2017's Berlin Film Festival for her autobiographical retelling of her own coming of age story. Garnering incredibly natural and endearing performances from her 7 year-old star and 4 year-old Paula Robles as her cousin Anna, Simón's astute direction reveals the psychological reactions of a child entrusted to the unfamiliar. Uncle Esteve and Aunt Marga are warm and loving, but Frida is withdrawn and watchful. When Marga tells her to drink her breakfast milk, Esteve notes her reluctance and swallows half, telling her that Neus, her mother, didn't like milk either. Taken to Gabriel's (Quimet Pla) neighboring farm, Frida carefully picks her way past his chickens. At the butcher's, she presses her face up against the case as a skinned rabbit is cut up. Everything is strange and disorienting. Frida begins to act out by one-upping Anna with her extensive collection of dolls, stating she has so many because her parents loved her so much (the innocently angelic Robles listens solemnly, stroking her cat). She pouts in the back seat as Marga drives her to a doctor's appointment, finally voicing her displeasure with the way her hair looks. Offered Marga's comb, she throws it out the window. Marga stops, retrieves it, and carries on. But it is not until Frida skins her knee after an introduction to a local girl closer to her own age that we come to understand just what took her parents away, that doctor's appointment suddenly far more ominous. Tensions arise among the family, Marga frustrated with Esteve's permissiveness, even more outraged when her in-laws arrive unexpectedly, disrupting Frida's new routine. Frida's religious grandmother schools the girl in prayers and makes her disapproval of her children's lifestyles well known. Frida's been slipping out at night, leaving gifts for her mother in a hollow in the woods where the statue of a saint rests. Anna mimics some of Frida's lesser bad behaviors, but Frida's ramp up, testing her limits. The olive skinned Artigas with her mass of dark curls is extremely expressive, quietly observing, quietly subversive. The young actress portrays Frida's brattier behavior without losing our sympathy, Simón always placing her perspective as one among more inscrutable adults. She is radiant when accepted, carrying the banner flag in the village square for its procession of Gegants and Capgrossos, the papier maché giants and grotesques of Basque folklore. She conveys her attachment to her younger 'sister' even as she acts out against her more secure position within the family. Also exceptional is Cusí (the actress resembles a cross between Charlotte Gainsbourg and Berenice Bejo), whose loving nature far outweighs the frustrations that seep through her overburdened mom (Artigas does a hilarious impression of the mother who needs rest while playacting with Anna). The handsome Verdaguer balances his childlike exuberance for play with support for the necessary rules his wife insists upon. Cinematographer Santiago Racaj captures the summer hues of La Garrotxa as an idyllic childhood environment. Esteve and Marga's old stone house, one Simón herself played in as a child, sprawls within the landscape, Esteve's jazz records emanating from within. Simón and Viso's screenplay doesn't spell everything out, always keeping us in Frida's perspective, at the same remove from the adult world as she is, but Simón's strong control of her material and her talented cast relate everything we need to know. Grade: