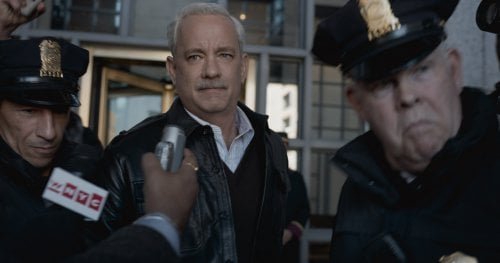 On January 15, 2009, an unprecedented aviation disaster began to unfold when a flock of geese were sucked into the engines of US Airways Flight 1549, completely disabling them. Captain Chesley Sullenberger, a former USAF pilot, used his vast experience and instinct, saving all 155 passengers by landing on the Hudson River. But as everyone was anointing him a hero what they did not know was that an aviation investigation was questioning every move of the man they'd come to know as "Sully."

For some reason, if you asked me to name my favorite actors, Tom Hanks would probably never occur to me, his Everyman decency less exotic than a Mads Mikkelsen, less idiosyncratic than a Jesse Eisenberg, not as sexy as a James McAvoy. But damned if the actor hasn't been nailing one performance after another, his craft maturing like a fine wine. His Sully is no exception. Screenwriter Todd Komarnicki ("Perfect Stranger") has taken a simple approach in adapting Sullenberger's book, perhaps too simple. The story has three engines - the actual 'Miracle on the Hudson,' the National Transportation Safety Board's apparent goal to prove the plane could have made it back to LaGuardia or to New Jersey's Teeterboro Airport and Sully's resulting crisis of self doubt - but director Clint Eastwood's decision to present these three thrusts in non-linear fashion helps them comment upon each other, his visualization of the actual landing shockingly realistic without being exploitative (it must be noted that his depictions of Sully's nightmares feed into the less-commented upon panic felt by New Yorkers at the sight of a low flying plane). Hanks' quiet calm command as he faces incredible stress turns to a mixture of dazed humility and pride at what his team and New York responders accomplished, the latter ultimately fueling strong resistance against the NTSB's methods. The film's production is striking in its blandness, Sully and his first officer Jeff Skiles (Aaron Eckhart) deposited in a bunker like Marriott after their ordeal, the NTSB investigation taking place in a massive conference room with all the personality of an airplane hanger. Even the plane in question lacks grandness, a smallish, single aisle Airbus A320 with a gray interior. New York City in January is dismal, only the warm gloom of a blue collar bar the least bit welcoming. The only airy light on display outside the cockpit's view is at Sully's home, seen as he shares phone conversations with his wife Lorraine (Laura Linney). But time spent with the Sullenbergers' marriage proves only a distraction, his wife's financial anxiety adding to his stress without benefit of sufficient explanation (Sully's fledgling business as an airline safety expert also gets short shrift as the object of Skiles' pre-flight ribbing, an opportunity for Sully to consider and reject a hidden talent for gilding the lily). As Skiles, Eckhart is strong, getting the film's last (well deserved) laugh. Mike O'Malley, Jamey Sheridan and Anna Gunn comprise the NTSB tribunal. Michael Rapaport is an appreciative bartender (his 'Sully' is a shot of Grey Goose with a splash of water). Patch Darragh ("The Visit") is affecting as the air traffic controller fearing the worst. "Sully" was shot on IMAX cameras, a fact the marketing campaign has been pushing but which, frankly, adds little to the experience. See it for Eastwood's classical direction and Hanks' thoughtful reconstruction of an American hero. Grade: