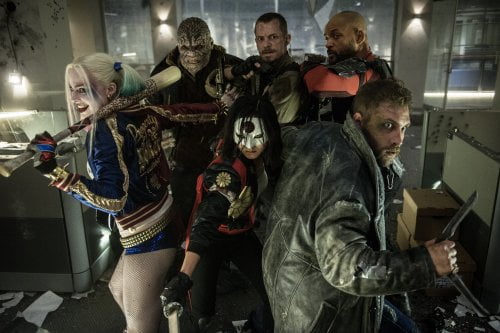 What if Superman arrived on Earth, tore the roof off the White House and took the President? That is the question posed by U.S. intelligence officer Amanda Waller (Viola Davis, "The Help") during her proposal to fight the latest threat against the U.S., a country still mourning its Superhero. After demonstrating the skills of Enchantress (Cara Delevingne, "Paper Towns"), an ancient creature once worshipped as a god controlled by the heart Amanda keeps in a lockbox, the military brass is willing to accept the six super villains Waller suggests should be sprung from their Black Site under the command of Colonel Rick Flag (Joel Kinnaman, the "Robocop" remake). Their de facto leader, Deadshot (Will Smith), dubs them the "Suicide Squad."

After months and months of hype featuring news of Jared Leto's (Joker) disgusting 'gifts' sent to costars and the transformation of Margot Robbie into his unhinged lover Harley Quinn, writer/director David Ayer's ("End of Watch," "Fury") entry into DC Comics rivalry with Marvel is a noisy, murky dud where only the lesser known stars make any kind of an impact. "Suicide Squad" makes one almost nostalgic for "Batman v Superman." As Amanda ticks off her wish list, we're given flashback overviews of the six. Deadly hitman Deadshot was caught when his 11 year-old daughter Zoe (Shailyn Pierre-Dixon) begged him not to shoot Batman (Ben Affleck). Harley Quinn was the Joker's psychiatrist at Arkham Asylum prison, but she fell in love and was electroshocked into her current, crazy incarnation (she's kept in a cage within a room, just like Hannibal Lecter). Killer Croc (Adewale Akinnuoye-Agbaje, "Concussion") is a canabalistic genetic mutation. Former gangbanger Diablo (Jay Hernandez, "Hostel") breaks out in pyrokinetics when he's angered, a power that cost him his family and one he is reluctant to use again. The involuntary team is rounded up by Aussie bank robber Boomerang (Jai Courtney, "Terminator: Genisys") and escape artist Slipknot (Adam Beach, "Flags of Our Fathers"). Flag is put into a difficult position when Enchantress, who has possessed the woman he's in love with, Dr. June Moone, begins to build an army and rejuvenates her brother. The Suicide Squad battles her minions while also facing the threat of the Joker, who wants his Harley back. Ayer incorporates themes of morality (is Amanda just as bad as the villains she recruits?) and redemption (Diablo's interior conflict), but they hardly resonate in this forgettable hash. Deadshot's character makes no sense, a hitman with empathy. Smith exhibits none of the cold brutality his character should. Margot Robbie's Harley is somewhat engaging due to her slut punk attire and acrobatic skills, but the actress is miscast, her New Yawk accent off key. Leto is also bolstered by the design of the character, but despite his own spin, he doesn't hold a candle to Heath Ledger. Worst is Cara Delevingne, an effect masquerading as a face. Adam Beach barely registers. It is those lesser known stars who bring any semblance of real character to their roles. Hernandez is sympathetic, while Akinnuoye-Agbaje and Courtney(!) add some laughs. Davis is committed, Kinnaman along for the ride. The film also stars newcomer Karen Fukuhara as Katana, a good guy whose Samurai sword holds the soul of her dead husband, Ike Barinholtz ("Neighbors") as a sadistic prison guard and a flash of Ezra Miller ("We Need to Talk About Kevin") as The Flash. If it sounds like there's too much going on, that's because there is. Ayer's direction doesn't help, too many stars framed in iconic poses amidst chaos. The rock soundtrack competes with the action instead of complementing it. "Suicide Squad" aims for heavy metal chic but it's as boring as canned elevator music. Grade: