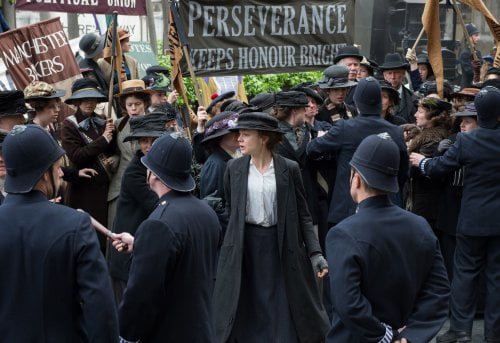 In 1912 London, Maud Watts (Carey Mulligan) is already in a supervisory position at the laundry where she has worked since childhood, although the position was granted by the boss, Norman Taylor (Geoff Bell, "Kingsman: The Secret Service"), who regards his underpaid female workers as there for his taking. Still, Maud is relatively happy with her coworker husband Sonny (Ben Whishaw, "Bright Star," "Skyfall") and the young son, George (Adam Michael Dodd), she adores. But when Maud sees sexual abuse affecting a new generation and begins to cross paths with the publicly scorned demanding 'Votes for Women!,' she joins the fight, becoming a "Suffragette."

Here it is 2015 and equality is still a hard fought issue for many, but it may surprise those who envision Suffragettes as well-heeled, tea sipping protest marchers to learn just how down and dirty the fight for women's suffrage really was. Director Sarah Gavron ("Brick Lane") focuses on one woman's story, fictionalized by screenwriter Abi Morgan ("Shame," "The Iron Lady") to encompass major events. As Maud, Carey Mulligan delivers a fierce and heart-breaking performance. The Watts live in a dingy, cramped apartment where Maud continues her toils. Sonny is a good, loving husband, but one of his time, collecting his wife's wages weekly, expecting obedience. After Maud witnesses coworker Violet Miller (Anne-Marie Duff, "Nowhere Boy") as one of the Suffragettes breaking shop windows, she announces in the workplace that she will go to hear Violet give testimony at the House of Parliament. Sonny's not happy, the Suffragette movement not something for a respectable wife. On the day, however, Violet arrives visibly beaten, and Maud is pressed to take her place. Speaking simply, her everyday plight (female laundry workers make over 30% less than their male counterparts for longer hours in harsher conditions) appears to move David Lloyd George (Adrian Schiller, "Bright Star"), but the Conciliation Bill still fails to pass and Maud is shocked at the police brutality rained down upon the women upset by the news. When Maud visits Hugh Ellyn's (Finbar Lynch, "Child 44") pharmacy, she meets his wife, Edith (Helena Bonham Carter), a Suffragette leader who arranges meetings in the back of their shop. She's also clandestinely photographed by Inspector Arthur Steed (Brendan Gleeson, "Calvary," "Edge of Tomorrow"), one of many tasked with breaking up the movement. When Maud's eventually arrested for protesting, Steed gives her a well-intentioned, almost paternal talking to, but having seen and experienced oppression, she emphatically informs him that the Suffragettes will win, and more importantly, why. And so begins a course of civil disobedience, from blowing up mailboxes to the Prime Minister's summer home. The women are routinely rounded up. Maud, inspired by Emily Wilding Davison's (Natalie Press, "My Summer of Love") repeated arrests and hunger strikes, goes on one of her own only to endure force feeding (witnessed from a hallway by Steed, whose faith in upholding the law by any means is shaken). What she endures in her personal life, though is far greater. Morgan's approach of putting us on the ground with a working class woman is a good one, incorporating many of the issues which drove the movement. While Emmeline Pankhurst (Meryl Streep, in what amounts to a glorified cameo) and the early Suffragettes were upper class, it is surprising how many issues these women shared with their less fortunate sisters, but Morgan leaves us to connect these dots and doesn't elaborate. The character of Alice Haughton (Romola Garai, "One Day"), the wife of pol Benedict Haughton (Samuel West, BBCA's 'Jonathan Strange & Mr Norrell'), was originally the screenplay's focal point, but she's been pretty much left by the wayside here. The film's climax also portrays Wilding Davison at the Epsom Derby as an intentional martyr for her cause, a debatable theory. Mulligan's performance, though, rallies the audience to her character's resolve. Also very good is Whishaw portraying a good man whose inability to foresee sweeping social change forces his hand badly. He's countered by Gleeson, whose character's education and experience allows for more sympathy. Bonham Carter provides strength of conviction while Press is almost otherworldly, a Suffragette Joan of Arc. "Suffragette" is an important reminder of how hardly won were rights we now take for granted. Closing credits recount global women's voting right history that is shockingly recent. Grade:

The women’s right to vote movement began in Victorian England circa mid-1800s. With painfully slow progress, the movement gained momentum in subsequent years, but by the turn of the 20th Century, female suffrage was still not granted. Just prior to the start of WWI, the militant faction within the movement went to the streets to sabotage power and telegraph lines and face imprisonment and abuse by the police and public officials. It was a long and tough fight for the ground troops of the movement called “Suffragette.” I am pretty familiar with the American women’s suffrage movement and its history leading to the 19th Amendment granting all women over 21 the right to vote in 1920. I had thought that the British suffragist movement had achieved that right years before us former colonialists. “Suffragette” corrects my erroneous belief with Carrie Mulligan, as working class laundress and mother Maude Watts, the focal character in this story of revolution. Maude suffers the daily drudgery, like millions of others, of being the country’s second class citizens, required to work, raise a family and care for a household – with no say in what the men decide is best. The story, directed by Sarah Gavron and written by Abi Morgan, begins well into the women’s movement leading up to the start of World War One. The filmmakers show the frustration of the women who simply want to have a legitimate place in the society they work so hard for and with little thanks – like the right to vote. “Suffragette” depicts, quite well, the lengths the women went to earn the right to vote. It was a violent movement that took its toll on the participants fighting the uphill battle. Mulligan’s Maude is also used to show the impact of the movement on the patriarchal family system where a woman can be a virtual slave. Carey Mulligan, once again, gives a fierce individuality to her character and full dimension. The supporting cast creates a rich variety of characters, both real and fictitious, as the warriors in the battle for true universal equality – which, in Britain, did not happen until 1928. The mostly femme cast give humanity to their roles, women dedicated to women. Men, on the other hand, are mainly stick figures with the weak husband, the bullying cop and the supportive husband representing “men.” The production works on all fronts from period costume and set design to the color palette of the film – very dark earth colors prevail throughout. “Suffragette” is a solid period political drama that resonates today in a world where basic human rights are still in question in many places. Considering that women’s rights and universal suffrage are less than a century old, we have a long way to go.