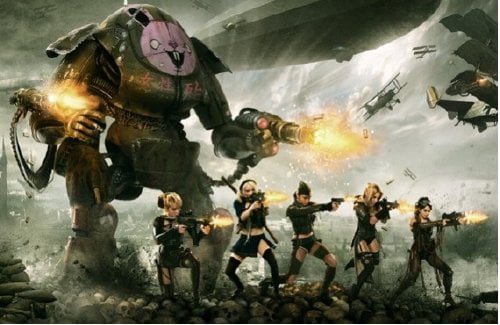 After their mother died, Baby Doll (Emily Browning) and her sister (Frederique De Raucourt) are left in the clutches of their evil stepfather (Gerard Plunkett). When he attacks her sister with licentious intent, Baby Doll pulls out her dead father’s pistol, intending to shoot her pig of a stepfather. Instead, she misses him and accidentally kills her young sibling. The stepfather uses the killing to have Baby Doll committed to an insane asylum. He also arranges for her to be lobotomized and the young woman has only five days to escape in “Sucker Punch.”

Cowriter (with Steve Shibuya)/director Zack Snyder (2004's "Dawn of the Dead," "Watchmen") returns to the desaturated CGI world of his Spartan epic '300' for his first original story, a women in prison film turned fantasyland videogame. There are a couple of good performances and eye candy galore, but this tricked up female empowerment tale undercuts itself with its fetishized slutty schoolgirls and its repetitious steampunk anime aesthetic. In a dialogue free establishing sequence, we learn Baby Doll's (Emily Browning, "Lemony Snicket's A Series of Unfortunate Events") mother has died leaving her and her younger sister in the hands of their sexually abusive stepfather. Baby Doll tries to kill him and her sister dies instead. She's placed in a Gothic insane asylum where corrupt orderly Blue Jones (Oscar Isaac, "Agora," "Robin Hood") promises dear old dad he'll forge the doctor's signature assuring Baby Doll is lobotomized within five days. On the brink of this horrific procedure, Baby Doll slips into an imaginary world where the asylum is a theater/bordello run by Blue and where Dr. Vera Gorski (Carla Gugino, "Watchmen") is their dance coach. Her raw talent (which we only hear about, never witness) mesmerizes not only her audience, but herself, as she slips into yet a third world where a Wise Man (Scott Glenn, "The Right Stuff") tells her she needs four things to attain freedom - a map, a knife, a key and something she will recognize when she finds it. Then she's given a Samurai sword and fights her way past three giant Samurai monsters (Tarantino hodgepodge homage "Kill Bill" gets its own homage here). Then she comes back to her dance stage. She wins allegiance by saving the life of fellow inmate Rocket (Jena Malone, "Donnie Darko," "The Messenger") from the brutish cook and her freedom plan is also joined by Blondie (Vanessa Hudgens, the "High School Musical" movies) and Amber (Jamie Chung, "Grown Ups"), but Rocket's older sister, Sweet Pea (Abbie Cornish, "Bright Star," "Limitless"), isn't entirely sold. And so, just like a videogame, the five scantily attired ladies fight off Nazi zombies, dragons and shiny mechanical men guarding a bomb on a speeding train, en route to Baby Doll's discovery of what that fourth element is. The film looks like a tinted black and white comic book that is overstuffed with content in every fantasy frame. The action choreography allows you to see actresses hitting their marks and the editing is, of course, frenzied. Makeup is luridly overdone - how many pairs of false eyelashes were these girls forced to wear? The loud soundtrack is an odd cornucopia of covers ("Sweet Dreams," "White Rabbit," "Tomorrow Never Knows"), some sung by Browning, with the exception of Bjork's thematic "Army of Me." Browning is like the Hello Kitty of the cast here - all big eyed cuteness, no character, and Hudgens and Chung are background. Malone and Cornish, the two most experienced actresses, are the only two who project any depth. Gugino is campy fun. Almost all the men are simply villainous and disgusting with the exception of Jon Hamm, who, in playing the dual role of the lobotomist and the club's fabled 'High Roller,' is wooden. Snyder brings no parallels or irony to the character either. I didn't hate "Sucker Punch," but Snyder is selling damaged goods in a sometimes pretty but artificial package.

Director Zack Snyder has had, to date, an eclectic career, from “Dawn of the Dead,” “300” and “Watchmen” to the owl movie, “Legend of the Guardians.” All of these films relied heavily on CGI and the first three were based, either, on another filmmaker’s works (George A. Romero’s “Living Dead” franchise), Greek legend (“300”) or a popular graphic novel (“Watchmen”). In “Sucker Punch“ he wrote the original story and adapted it with co-scribe Steve Shibuya and the result is decidedly flat. Certainly, we have the CGI eye candy, beautiful babes and action packed fights to satisfy the Snyder fans. But the story is just that – CGI, beautiful babes and action packed fights – strung together with a mishmash story thread that has Baby Doll facing and vanquishing, mentally and physically, her nemeses in this world and others. The CGI fight scenes are, essentially, the same each time, only with different sets and bad guys with giant armored samurai warriors and faceless Nazi monsters just some of the baddies Baby Doll and her four cohorts – Sweet Pea (Abbie Cornish), her sister Rocket (Jena Malone), Blondie (Vanessa Hudgens) and Amber (Jamie Chung) – must face in order to escape. This whole premise is based on Baby Doll’s imagination after she enters the mental institute. Instead of being in asylum, she escapes into a different world where the prison becomes a nightclub and the inmates become exotic dancers for the club’s wealthy clientele. Institute doctor, Vera Gorski (Carla Gugino), turns into a dance instructor in Baby Doll’s imaginary world and begins to train the younger woman to dance and entrance the clients. This launches another level of fantasy as Baby Doll searches for the five items that will set her and her friends free. The five items are defined by the mysterious Wise Man (Scott Glenn) who appears in every layer of her imaginings. There is also another visitor to these worlds called High Roller (Jon Hamm) a character that has almost no development or depth, lacking any sinister quality. Acting, as one expects, takes a back seat to the copious CGI that is the draw of “Sucker Punch.” However, without a coherent story that draw is for Zack Snyder/game boy fans only. Snyder has a knack for the computer side of filmmaking but, as writer-director, he lacks the ability to create believable characters or elicit good performances from his ensemble cast. It is not because of the very attractive young cast, though, but because of the lackluster characters they are given. Actors need a character not a caricature to sink their teeth into. Sadly, the actors could have been replaced, readily, by computer-driven images. I do not think that Snyder has done anyone’s career a favor in this techno fantasy.