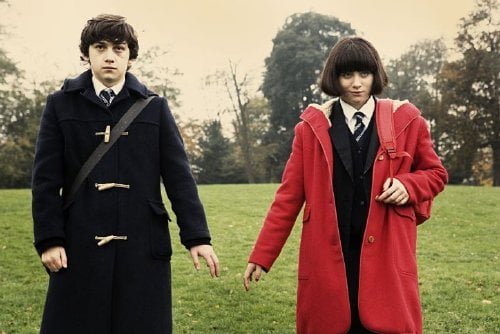 15-year old Oliver Tate (Craig Roberts) is concerned about just two things in life: To lose his virginity before his 16-th birthday and to save his parents’ marriage and prevent his mother (Sally Hawkins) from having an affair with a slick, fast-talking spiritual advisor (Paddy Considine) in “Submarine.”

In a Welsh seaside town, odd only child Oliver Tate (Craig Roberts, 2011's "Jane Eyre") is fifteen years old, living with his owlish, reticent dad Lloyd (Noah Taylor, "Shine," "Red White and Blue") and his more outgoing mom Jill (Sally Hawkins, 2011's "Jane Eyre"). He's got enough on his mind figuring out how to get a girlfriend and lose his virginity when he becomes obsessed with the affair he thinks his mother is having with a new neighbor, new age psychic charlatan Graham Purvis (Paddy Considine, "In America"), who just happens to be her old boyfriend. Oliver starts making bigger moves at school, but at home he operates like a "Submarine." Writer/director Richard Ayoade has adapted Joe Dunthorne's novel so that it wears its detached hipster irony on its sleeve. We don't get many films from Wales, but otherwise "Submarine" plays an awful lot like "Rushmore" with a dash of "son of Rambow" thrown in. And I have a problem with a film that tries to get laughs from the plotted poisoning of a dog which then gets hit by a train. "Submarine" isn't a bad film, though merely very reflective of better films that have come before it. The film is broken into a Prologue, Three Parts and an Epilogue. The Prologue establish's Oliver's, er, 'healthy' ego as he imagines (via his pretty constant narration) his own death, his loss affecting teachers and teen girls with media coverage throughout the entire countryside. Part One is dedicated to Jordana Bevan (Yasmin Paige, "Wondrous Oblivion"), the girl Oliver sets his sights on, her having been recently dumped by Mark Pritchard (Osian Cai Dulais) and being attractive in spite of her eczema. Oliver further endears himself to the audience by bullying another student, the overweight Zoe Preece (Lily McCann), with his best buddy Chips (Darren Evans, "Summer Scars") as a pickup come-on. In Part Two, Oliver's obsession with Graham Purvis takes center stage while his romance hits a speed bump when he cannot deal with Jordana's mother's cancer. Part Three is Showdown time when both Oliver and his dad must find the gumption to make a stand for their women while the Epilogue deals with the aftermath. Ayoade uses tricks such as quickly edited jump cuts to give weightier meaning to Oliver passing Jordana in the school hallway and Super 8 home movies to provide the budding romance montage. Oliver spies on his parents' sex life by graphing the state of their bedroom dimmer switch on a daily basis and we get video essays contrasting Oliver's takes on their careers. Depending on his parents' Thursday 'cinema night' for an empty house, Oliver seduces Jordana with red flowers, red candles and shrimp cocktail. Later, mom even admits to administering a hand job. This is all so very Max Fischer. Newcomer Craig Roberts appears to have modeled his performance on "Harold and Maude's" deer-in-the-headlights Harold. He's got that same bowl cut surrounding wide-eyed wide set eyes look, a quiet observer of the world who is sparked into quirky action by love or mum. Yasmin Paige is the already worldly Louise Brooks-bobbed Jordana just like many teen mystery girls before her. Both Lily McCann and Darren Evans give more real and interesting performances in far more minor roles, but "Submarine" is blessed with some heavy hitters in adult roles. Noah Taylor, having just come off playing a psychopath, couldn't be more different as a man disappearing into his cardigan and Sally Hawkins gets the conflict of a married woman flushing to new interest in the face of apparent indifference just right all covered with the veneer of a sensible wife, mother and working woman. As Purvis, Paddy Considine sports an 80's shagged mullet and acts cock of the walk as he hangs onto the type of celebrity which requires pushing his own videotapes at town halls. The Swansea locations help add a freshness to "Submarine" and it does have some amusing moments (Ayoade contrasts Jill's giddy viewing of Purvis's videotape with Oliver's recollection of his dad giving a talk on the royal sturgeon, for example), but too much of the film feels like a retread. "Submarine" just gets a 'meh' response from me.

The coming-of-age film – “Rushmore,” “Harold and Maud” and “Juno” are a few examples – has been with us for a long time. Some, like those just mentioned, are top examples of the genre and show that it can still be fresh subject matter. “Submarine,” though, is not and this is due to the not very likable cast and a wooden screenplay. Oliver is always dressed in his nerdy wooden-buttoned car coat and obsessed with his mom and dad’s sex life, monitoring their bedroom light daily to see if it is on dim (a good sign) or bright (not so good). He also wants to get laid, but that is hard to do for a high school nerd in Wales. Then, he meets Jordana Bevan (Yasmin Paige), an asthmatic pyromaniac who admires bullies. Again, this is not a likable character. Sally Hawkins’s mom is shallow as a woman in a dissolving marriage who is tempted by her first love, Graham Purvis (Considine), a self-proclaimed spiritual healer whose sleaze content is off the charts. Noah Taylor, as Oliver’s dad, is a morose and depressing character as he wallows in his misery through most of “Submarine.”. First-time feature writer-director Richard Ayoade, adapting Joe Dunthorne’s novel, does a lackluster job with his debut feature. Neither story nor characters evoke any sympathy, a bad thing for a coming-of-age.