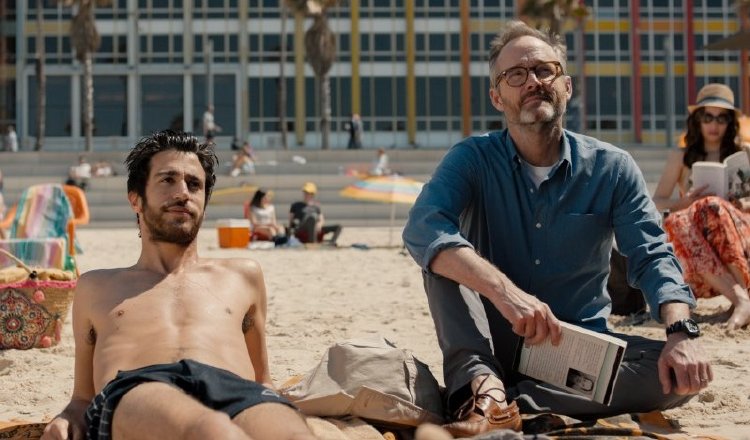 Michael’s (John Benjamin Hickey, 2021's 'In Treatment') approach to travel writing is to give himself five days to form an impression of a new place, but his usual routine is upended in Tel Aviv when the filmmaking student, Tomer (Niv Nissim), who he’s rented an apartment from mixes up the arrival date for his “Sublet.”

Israeli cowriter (with "Yossi's" Itay Segal)/director Eytan Fox ("Yossi & Jagger") has blended the fish-out-of-water and generational clash comedy templates with something like a coming-of-age narrative crossed with romantic drama and ended up with two nice character studies that get bogged down in third act contrivances.  Still, Hickey and Nissim create fully fleshed out characters whose differences encourage curiosity, the older man’s empathy for a cash-strapped student the opening for deeper feelings.

But initially that cash-strapped student aspect is rather off-putting, Michael walking into a messy apartment cluttered with filmmaking gear and no space in closets, bureaus or medicine cabinets for a visitor’s items.  (‘Who hangs a movie poster in their living room?’ asks Michael’s boyfriend David (Peter Spears, "Call Me By Your Name") during an iPhone ‘walk around’  Um, I do?  Odd thing to be sniffy about given the general clutter…)

After a telephone call from the U.S. referencing David that clearly takes Michael by surprise, we see him observing the very good-looking Tomer, Fox teasing out the younger man’s sexual orientation.  After Michael checks out Tel Aviv’s supposed best bakery Sweetbox and returns, Tomer appears to get something and is invited for breakfast, noting how funny it is that someone has to come from New York to introduce him to a place around the corner (later Tomer will experience sticker shock in said bakery).  That leads into the day and when Michael realize Tomer’s basically homeless while he’s there, he invites him to stay in his own apartment ‘in exchange’ for being his guide.

It’s very clear that Michael is attracted to Tomer, but he doesn’t act on it, instead asking leading questions which allow us to find out that Tomer’s got an ‘everything goes, no attachments’ philosophy towards relationships.  When Tomer initiates an Israeli Grindr three-way, Michael balks.  Then Tomer invites Michael to dinner with his mother, Malka (Mickey Kam), who informs Michael that he never brings anyone to her kibbutz.  This is also where the mysterious issue with David is revealed and the scene turns into sentimental contrivance, an unnecessary screenplay device which detracts from the film.

The travel aspect of Michael’s trip is also rather anemic, Tomer basically taking him for a walk to a local restaurant, to the beach and to an independent modern dance his actress friend Daria (Lihi Kornowski) is in.  Given his approach, it’s not odd that Michael doesn’t have a photographer with him, but he fails to take a single photo himself.  The strength of the film is with its leads, the award winning veteran and screen newcomer connecting so believably from such opposing romantic ideologies we come away from the film with hope for humanity.

Michael Greene (John Benjamin Hickey) arrives in Tel Aviv to write a piece for his Intrepid Traveler series. He rents out a local’s apartment for his five day stay and sets about to see the city. His landlord, Tomer (Niv Nissim), it turns out, is now homeless, a talented tour guide and, soon, Michael’s friend in “Sublet.”

Director Eytan Fox co-writes, with Italy Segal, a charming two hander about a fish out of water older man and a the young guy who guides him on the way to learn to live life. Their time is limited to just five days because that is the assignment: get to know a city and write about it for tourists.

Michael starts out in his usual manner – see Tel Aviv on his own and write about his experiences. Tomer’s homeless plight strikes a chord in the older man and the two see the city together and Michael gets the material he needs for his article. All the while, Tomer asks questions and gets Michael to open up, He is holding something inside – we only get an inkling of make Michael, Michael – and Tomer helps draw him from his self-imposed shell.

The story of two people surmounting the generation gap between them has been done for many, many years – think Hal Ashby’s “Harold and Maude (1971).” Here, there is a nice chemistry between Michael and Tomer as they both learn and grow in their brief time together.