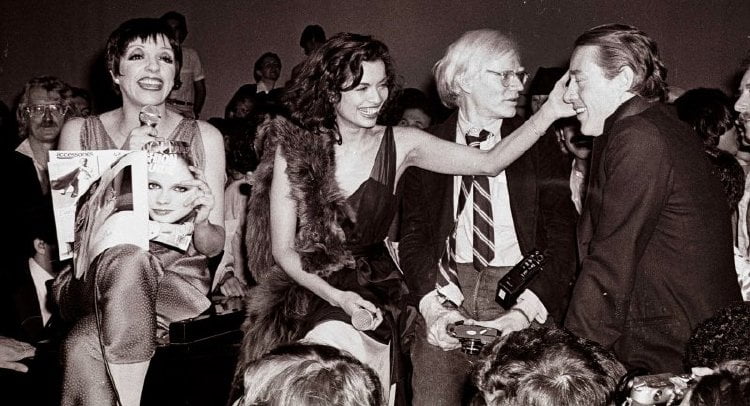 In 1977, Steve Rubell, 33, and Ian Schrager, 29, in a single night, created a Manhattan icon of pleasure and hedonism that included, during its short life, a bevy of high profile celebrities, including Andy Warhol and Liz Taylor, when they opened “Studio 54.”

'It would only last for 33 months,' is the startling reminder given its phenomenal cultural impact that is the first thing we hear. Now with cofounder Ian Schrager finally willing to talk about it, director Matt Tyrnauer ("Scotty and the Secret History of Hollywood") looks back at the rise and fall of "Studio 54." If you've come for all the salacious celebrity gossip, you'd be better off reading 'The Andy Warhol Diaries' as this documentary would more accurately reflect its focus if were called "Schrager and Rubell." They were the two middle class college buddies from Brooklyn whose incredible rise to fame and wealth was undone by their hubris, Rubell telling the press that only the Mafia made more money than them. Tyrnauer gives us plenty of archival snaps and brief flashes of video of club goers in action, but doesn't dwell on them, not even on Bianca Jagger's infamous birthday party where she rode onto the dance floor on a white horse. What he does do is examine the club's influence in breaking cultural barriers. The club only existed under Rubell and Schrager from 1977 to 1980, before they were arrested and jailed for tax evasion on their mind-boggling 80% 'skim.' Rubell had been struggling with a chain of steak houses he'd opened too aggressively when he and Schrager bought a run down theater on West 54th St. at 8th Avenue, the then sleazy theater district. With a six week time limit to open, they found their competitors had convinced every builder and contractor to avoid them. Like a film producer facing a slashed budget they got creative, hiring theater folks to build out their club. It was a masterstroke, resulting in a space like no other. They were also lucky with their timing, a post Vietnam and Watergate nation ready to have some fun with free love in the air and the AIDS crisis still on the horizon. Rubell, who liked to party, knew who to contact to ensure a big opening and he got one, attracting celebrities, fashion designers and supermodels (he'd pay publicist who could get their clients enjoying his club media attention). He was also infamous for his roped off entry, where he himself, along with doorman Marc Benecke, who would himself become famous, would pick and choose who could gain entry (anyone who looked the part and wanted to have fun, but not the 'Bridge and Tunnel' crowd, a phrase coined by Rubell). Studio 54 became a safe haven for drag queens and gay men, like Rubell, but the exclusivity began to stir resentments. People began to notice that cash register rolls were replaced mid-evening. Schrager and Rubell were busted for serving alcohol without a license, yet carried on for six months without it until the license was secured, drugs being easily available. When the IRS eventually took note, they raided the club, finding cocaine scattered around Schrager's desk (he claims it wasn't his) and bags of money and a second set of books secured beneath a dropped ceiling. Despite having Trump mentor Roy Cohn as their lawyer (and yes, Trump frequented the club), the two ended up serving three and a half years in jail. Studio 54 was sold. Schrager, who is quite open about his past (he was given a full pardon by Obama, backed by the case's prosecutor), reflects on the humbling experience. He was the quiet, behind-the-scenes guy and it is quite obvious he was the club's visionary. He and Rubell started all over again, getting into the hotel business. One wonders how long that partnership would have lasted had Rubell not died of AIDS, the flashier partner's talents less applicable to their new endeavor. The film is packed with disco spins like 'Fly Robin Fly' and 'You Make Me Feel.' There is speculation that the 80's 'Disco Sucks' movement was a backlash to the haves who frequented 54 by the have-nots who never got in, which partially negates the documentary's inclusiveness spin. Tyrnauer's done a solid job relating the club and its founders' history, but while we get a feel for what it was all like it is bound to disappoint those looking for insider anecdotes about its hedonistic excesses and celebrity patrons. Grade:

The title of this well-crafted documentary is misleading. Yes, “Studio 54” does tell us about the incredibly fast rise of the Manhattan nightspot that drew the glitzy celeb personae and became The Place to show your face. But, it is really the biographies of the club’s founders, Steve and Ian, their lifelong friendship and all the other ventures before and after that are told. Matt Tyrnauer, who gave us film buffs the wonderful non-expose expose “Scotty and the Secret Life of Hollywood (2017),” does his homework, once again, as he documents, through the copious archival material available, the lives of these two forward-thinking young entrepreneurs. Of course, the Studio 54-era of their lives provides the most material with its celeb who’s who and the sex and drugs and disco notoriety. Now that I think about it, the title is not really misleading. It is, though, the target that the filmmaker uses to draw his audience who want to know about all the glitter, hedonism, celebrity and scandal. The nightclub drew media focus to its epic rocket ship-fast rise and meteoric fall, but Tyrnauer also tells the rest of this brief history, too, and wraps it all into an entertaining and informative package.