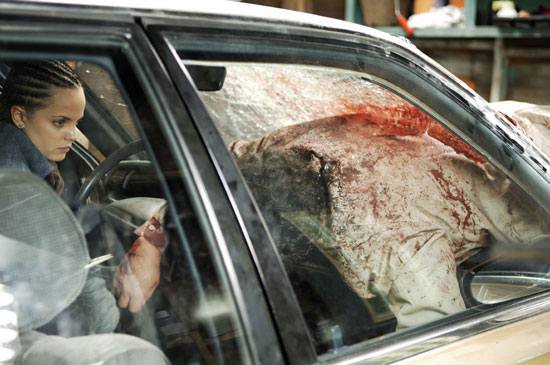 Brandi (Mina Suvari) is a self-centered, self-destructive party girl who cares only about herself. Tom (Stephen Rea) is a down-on-his-luck guy relegated to hauling his meager belongings in a shopping cart. When these two forces collide ­ she in her car, him with his cart ­ Brandi and Tom find themselves “Stuck.”

Director Stuart Gordon ("Re-Animator," "Edmond") ripped the 2001 story of Chante Mallard from the headlines (screenplay by John Strysik) and has fashioned a startling morality play while serving his fan base with blackly humorous, squirm inducing gore. Former project manager Tom (Stephen Rea, "The Crying Game," "V for Vendetta") is hitting rock bottom. With his unemployment run out and no new job, he's thrown out of the flophouse he's been staying at, treated with bureaucrat disrespect at a job placement agency and thrown out of the local park by a cop. Each of these authority figures gives him their desired result and an unthinkable one before advising that the choice is his. Brandi (Mena Suvari, "Factory Girl") shows considerable compassion at her nursing assistant job at an old age home, but when she reacts to incontinent patient Mr. Binckley's (Wayne Robson, "Wrong Turn," TV's "The Red Green Show") favoritism, Mrs. Petersen (the director's wife, Carolyn Purdy-Gordon, "The Pit and the Pendulum") advises that she will no longer have time to deal with such inconveniences as she is being fast-tracked for a promotion. Jazzed by the news, Brandi goes out drinking with coworker Tanya (Rukiya Bernard), then arranges to meet boyfriend Rashid (Russell Hornsby, "Edmond," "Get Rich or Die Tryin'") back at her place. Driving under the influence and trying to make phone calls, Brandi plows right into Tom as he pushes his shopping cart across a street. With the homeless man lodged half in and half out of her windshield, Brandi panics and races home, parking in her garage. But Tom isn't dead and Brandi's compassion slowly deserts her as she views the man as an obstacle to her promotion. Gordon and his writer Strysik do a lovely job up until this point both establishing the two main characters and uniting them as cogs being manipulated by the wheel (Petersen is a master manipulator), but once Tom is bloodily stashed in Brandi's garage, Gordon's horror instincts take over. Moral issues are not abandoned - illegal immigrants fail to report Tom's plight for fear of discovery and Tom's free will, his final 'choice' in the film, is an ironic comeuppance to societal pigeon-holing - but considerable time is spent grossing out the audience to the point where the film's second half begins to feel a bit repetitive (editor Andy Horvitch lingers a little too lovingly over shots of glass shards sliding into Tom's body). The Pomeranian scene, surely the product of a sick mind, is the type of Gordon groan-inducer that pegs "Stuck" as a cult classic in the making, though.

Writer-director Stuart Gordon (with scripter John Strysik) is well known to horror fans for his gore fest, “Renimator,” This time around he takes a true life incident: an inebriated woman driving home one night hits a homeless man, lodging him in the shattered windshield, and just drives home with the poor guy half in, half out of the car. The saying goes, “fact is stranger than fiction,” and helmer Gordon lets the true-life story come through. Sure, he has his expected bloody embellishments as poor Tom struggles to get free of his prison but stays accurate to the bizarre real events. This is not to say that “Stuck is not a cheese fest but is intriguing as we watch Brandi self-destruct while partying hardy and taking any and all pills or booze offered. We follow Tom as he is evicted from his shabby apartment on the day of an important interview. He scurries from his former home with the few belongings he can grab and goes to the job interview looking the beggar. He does not get the job. We watch as space shot Brandi’s and morose Tom’s paths seemed destined to intersect. And, not in a good way. This is only one of the very few times that I can say, I like Mina Suvari as an actress. This role seems made for her as she goes from panic and fear one moment, when she pulls into her garage with Tom half in her car and bleeding profusely, and is having sex with her boyfriend the next. Stephen Rea is suitably gloomy but, after the horrible accident, is stuck (OK, pun intended) with being a part of the bloody gore effects. Supporting cast is fine. Stuck” will attract the Stuart Gordon fans and those familiar with the real events that made national news back in 2001.