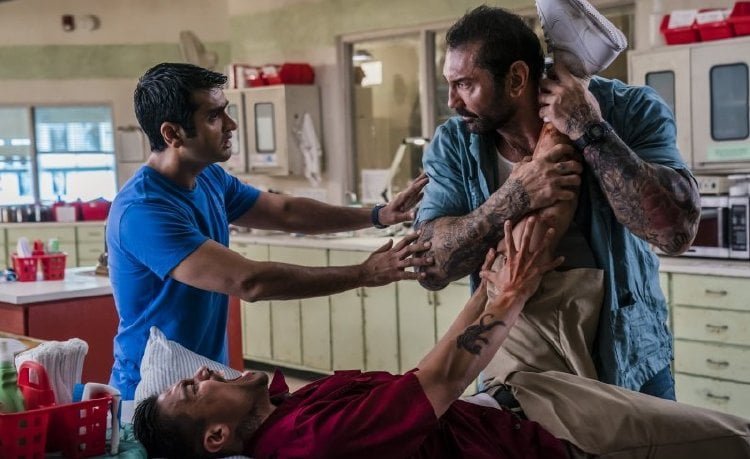 LAPD's Vic Manning ("Guardians of the Galaxy's" Dave Bautista) is an old school detective who has just been informed that the case against heroin dealer Teijo ("The Raid's" Iko Uwais, also the film's fight choreographer), the man who killed his partner, is being transferred to the Feds. Right after having Lasik surgery, Vic gets a tip on the location of Teijo's drop that very evening and goes rogue, but his compromised eyesight lands him in a municipal construction hole. Desperate, Vic tries Uber for the first time and is picked up by the eager-to-please Stu ("The Big Sick's" Kumail Nanjiani), whose daytime job boss Richie (Jimmy Tatro) at Out of the Box sporting goods likes to torment him with the nickname "Stuber."

This odd couple, buddy cop movie has a number of things going for it - Dave Bautista out from under his Guardians makeup, fight choreography by "The Raid's" Iko Uwais (this film's bad guy), a cool dog and a generational clash in what constitutes male identity - that it is disappointing that the film never quite gels. "Goon" director Michael Dowse wanted to make a film where the comedy and the action were equally strong but instead they feel disconnected, the brutally realistic violence of the action scenes at odds with comic elements that range from gentle to slapstick to uninspired. Nanjiani gets the biggest laugh at the expense of Ryan Gosling while proving to Bautista that torture is not necessary to achieve results. Dowse starts strong, showing us the past event which drives Vic in the present. Vic and partner Sara Morris ("Guardians of the Galaxy's" Karen Gillan) raid Tedjo's gang in an L.A. hotel, but Tedjo himself proves a challenging quarry, parkouring himself down the atrium's balconies before blending into a Staples Center crowd. Vic, who's lost his glasses, has trouble spotting him but Sara's keener vision is rewarded with a meticulously aimed gut shot. Six months later, Vic's Captain, Angie McHenry (Mira Sorvino), pulls the plug on his pursuit. We then meet Vic the man, a man so obsessed with his job that he's now single, his relationship with his adult artist daughter Nicole (Natalie Morales) so neglected she has to remind him that the biggest night of her career, her first gallery show, is that evening and he's chosen that day for LASIK. Meanwhile Stu, the man his fate will become entwined with, is bending over backwards to achieve a five star Uber rating (cue obnoxious customer montage) and working two jobs to help Becca (Betty Gilpin), the friend he wishes were more, open a spin gym business. It's no big surprise how writer Tripper Clancy resolves these relationships and he leans heavily on cliché as Vic pursues vengeance. Tell us that Stu's Uber is a leased electric Nissan Leaf and we can predict two things with assurance. There's some fun to be had when a tip from Leon (Amin Joseph) leads to Amber Titties (Amber Chardae Robinson), the no-nonsense manager of a male strip club whose last name isn't pronounced the way you think it is, but when the mismatched duo raid a residence and end up with a dog and wounded hostage, their stop at a veterinary hospital is a case of the film's best joke canceled out by bullets flying around caged animals. The pairing of Bautista and Nanjiani is inspired, a barking brick wall up against a chatty pacifist. But jokes regarding Vic's impaired eyesight and Stu's lease agreement grow stale quickly and the film's early momentum slackens into tedium. Efforts to score with soundtrack selections like 'Come Sail Away' and 'The Air That I Breathe' feel forced. Both the film's climax and its coda are weak, the latter suggesting a sequel. Grade: