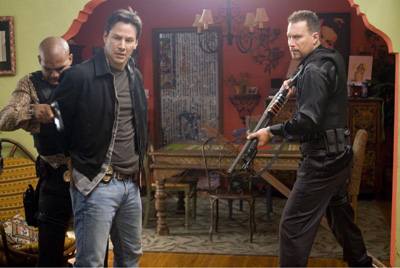 Tommy Ludlow (Keanu Reeves) is the top street cop in the LAPD. But, he has had problems coping with life since the death of his wife, drinking on the job and taking justice into his own hands. When he is implicated in the brutal murder of his former partner, Ludlow comes under the department’s internal investigation unit. Something is rotten in Denmark, though, and Tommy doesn’t know whom to trust and who not in “Street Kings.”

Sophomore helmer David Ayer foregoes his usual writer’s credit and leaves this story of cop corruption to a trio of scribes – James Ellroy, Kurt Wimmer and Jamie Moss adapting Ellroy’s story. The result is less than it should be in a tale that is heavy on shootouts but confusing because the identity of the bad guys keeps shifting. Bad cops are good cops, good cops are bad and I was as confused as Tommy as he sinks into a quagmire of conspiracy, corruption and treachery. The action stuff comes fast and furious, usually ending in an ever-increasing body count, but the mayhem is only loosely tied together with Tommy at the center of each shootout. The mayhem is not enough to hide the confusion of the story. Keanu Reeves, an actor whom I like regardless, is sullen, surly and sympathetic as beleaguered Tommy Ludlow. The problem is with the rest of the mostly two-dimensional cast. Only Cedric the Entertainer, as petty con man Scribble, and Hugh Laurie, as the suspicious CID captain, are given any character depth. Oscar winner Forest Whitaker is a major disappointment as the kindly commander who has taken Tommy under his protective wings but is not as he seems. Production values get solid handling with lenser Gabriel Beristain using his cameras well in capturing the copious action. Production designer Alec Hammond does a good job showing the seamy side of life for undercover cop Tommy. Helmer Ayer has a keen eye for action but should have had more concern about the tale he tells. The writer credits range from well experienced with novelist-screenwriter James Elroy to first time scribe Jamie Moss. This uneven balance shows in the uneven story that had me, at times, scratching my head. I’m a sucker for good shoot ‘em up action in a flick but I am also a stickler a good story. I got the former but not the latter.