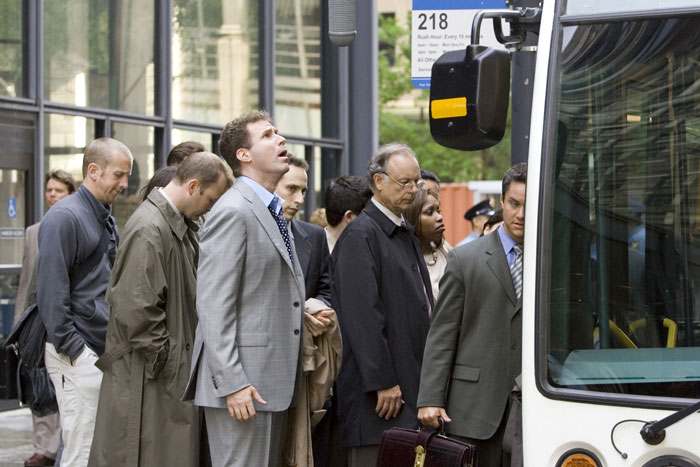 Novelist Karen Eiffel (Emma Thompson) is closing in on finishing her next, possibly her best, book but has a problem: she can’t figure out how to kill her main character, Harold Crick (Will Ferrell. Unbeknownst to Karen, Harold is a real, flesh and blood person who, suddenly, can hear her plans for his upcoming demise. If he’s going to save his life, Harold has to find the writer and make her change her (and his) ending in Stranger than Fiction.”

One day, just like every other of his meticulously structured days, IRS agent Harold Crick (Will Ferrell, "Talladega Nights: The Ballad of Ricky Bobby") begins to hear a woman's voice narrating his life. He soon discovers no one else can hear this voice and his panic grows when she begins to talk about his imminent death. Harold Crick's life is becoming "Stranger Than Fiction." What a schizophrenic career director Marc Foster is carving out for himself, from the dark crib death drama "Everything Put Together" to the Southern hothouse Halle Berry Oscar winner "Monsters Ball" and fantasy-laden biopic "Finding Neverland." Foster's last, "Stay," was a visually interesting, top heavy puzzle piece with an easy to figure twist. "Stranger Than Fiction" is another visually interesting piece with some good ideas that never gel into a cohesive whole and a less than satisfying wrap. Debuting screenwriter Zach Helm cooks up a character obsessed with numbers (all the characters are named after famous mathematicians), a theme that is visually reinforced by production designer Kevin Thompson but has nothing to do with the oft-used device of authors whose characters slip into reality ("Delirious," "The Dark Half," "The Truman Show," "Secret Window"). We learn that author Karen Eiffel (Emma Thompson, "Nanny McPhee") has a history of killing off her characters, but little about what makes her books tick or why her current one, "Death and Taxes," could be her masterpiece. Eiffel is introduced standing on the ledge of a building, a bit of fancy revealed to be research actually being conducted on the edge of her desk. Eiffel, who chains smokes and is suffering from writer's block, is disturbed to find her publisher has provided her with an unwanted 'assistant,' Penny Escher (Queen Latifah, "Last Holiday"), a character who adds nothing and is woefully underplayed by Latifah. When Crick cannot stand the voice in his head any longer, he bounces from HR's Dr. Cayly (Tom Hulce, "Amadeus") who refers him to Dr. Mittag-Leffler (Linda Hunt, "The Year of Living Dangerously") who suggests he is schizophrenic and sends him on to literary theory expert (and swimming coach) Professor Jules Hilbert (Dustin Hoffman, "Finding Neverland," enjoying eccentricity). Hilbert is disinterested in Crick's problem until Harold quotes that fatal bit of narration which began with the phrase 'Little did he know,' a phrase the Professor happens to be just mad about. But Hilbert may be more foe than friend when it comes to Crick's life and Harold, who has something to live for after having fallen for the baker he was sent to audit (Maggie Gyllenhaal, "World Trade Center," as Ana Pascal), tracks down Eiffel himself to plead for his life. "Stranger Than Fiction" starts with all kind of promise, from the computer generated numbers which trail after Harold's thoughts, then fall away, to the chemistry enjoyed between Ferrell, in meek and mild-mannered mode, and the anarchical baker brought to poppin' fresh life by Gyllenhaal (he woos her with 'flours'). But inspired ideas, such as the horrific nature shows Crick is forced to watch while 'waiting' for the 'plot to come to him' often just hang out there. Eiffel eventually wraps her book with a climactic letdown, losing praise for her work. As a result, the film also closes on a less than inspired note, but the filmmakers fail to take advantage of the literary irony.