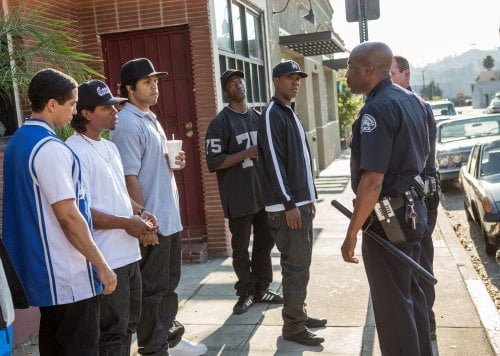 More than just a story about N.W.A., Andrea Berloff ("World Trade Center") and Jonathan Herman have written an epic that shows how the late 80's L.A. zeitgeist was the breeding ground for Gangsta rap and the East Coast/West Coast feud which would follow. Director F. Gary Gray ("Friday," "Law Abiding Citizen") has taken this sprawling tale with its myriad players and crafted a powerful film about creative expression, civil rights, friendship and the music industry. By its very nature, "Straight Outta Compton" couldn't possibly encompass all the details that went into the building and destruction of a rap group, but Gray's film should please those familiar with the music as well as providing an educational background for those who are not. The film opens by establishing N.W.A.'s three most prominent members, its opening sequence on Eazy an astonishing blast of LAPD overkill. Put into a tight corner by some scary customers who don't have the cash for his product, Eazy-E escapes over the rooftops as a police tank outfitted with a battering ram literally rips the front of the house off. The obviously talented Dre hasn't impressed his hard working mother (Lisa Renee Pitts, "Her") with his DJ gigs, so he packs up and leaves, promising younger brother Tyree (Keith Powers) he'll be back for him. On a schoolbus, the 16 year-old Cube witnesses the 'motivational speech' of an armed Compton heavyweight who boards, pouring his experiences onto the page in rhyme. After end-running the owner of the Doo-To club where Dre shares a regular gig, the newly assembled N.W.A. enlists Eazy to rap Cube's lyrics to 'Boyz-N-the-Hood,' pressing it on Eazy's Ruthless Records label. That draws the attention of rock manager Jerry Heller (Paul Giamatti, "Love & Mercy"), who gets the guys a deal with Priority Records, home of the rapping California Raisins. Their titular album ignites, leading to a tour in which they get arrested in Detroit (for performing 'F*&k the Police') and during which Cube, itching for his contract, notes that Heller only appears to be taking care of Eazy. Cube defects, with Dre following shortly thereafter, signing up with Suge Knight's (R. Marcos Taylor) Death Row Records. At home with his wife Tomica (Carra Patterson, "Why Did I Get Married Too?"), Eazy watches his fortunes fade along with his health as Cube and Dr. Dre climb the charts. The film is so packed - the groupies, the parties, the Rodney King riots, F.B.I. threats - that we're left to fill in some of the blanks. Heller, in particular, is difficult to judge here. A staunch defender of his artists' rights, we never get a real sense of the depth of his betrayal - true chicanery or industry business as usual? Better depicted is Dre's clash with Knight, whose Death Row offices are armed to the teeth with weapons and pit bulls and whose business practices equate to thuggery. Most female roles are relegated to the stereotypes criticized in the music's lyrics. The former members of N.W.A.'s lyrical public feud is played for both tragedy and laughs, although, again, some of the insults are left at face value. Eazy-E, who the film is dedicated to, is portrayed as the bigger man, the one who breaks the ice with both Cube and Dr. Dre, but who dies of AIDs before the agreed to reunion can take place. Mitchell makes him a very shrewd yet sympathetic character. Jackson Jr. is the angry young man with Hawkins the moral compass. Hodge's Ren is a follower, Brown's Yella comic relief. Several other artists weave throughout the tale with Marlon Yates Jr. as The D.O.C, Keith Stanfield ("Short Term 12," "Selma") an uncanny Snoop and Marcc Rose looking so much like Tupac one might think another hologram had been deployed. "Straight Outta Compton" is an incredibly ambitious musical biopic that illustrates how a hip hop group sparked a revolution, self-destructed, then regained its original bond. (Note that the soundtrack, Dr. Dre's first release in 15 years, is music 'inspired by' the motion picture and not the pre-released music the film is jam-packed with.) Grade: