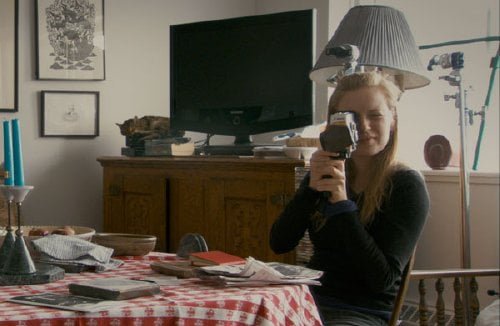 While she was growing up, writer/director Sarah Polley's ("Away from Her," "Take This Waltz") siblings used to joke that she didn't look like her father, Michael. In fact, there was even speculation that their actress mother Diane, who died of cancer before Polley hit her teen years, had had an affair with an actor who she was appearing with in a play in Montreal. Polley decided to reconstruct her family history with well-intentioned if not always reliable narrators in "Stories We Tell."

I want to start a campaign right now to get Sarah Polley the first screenwriting nomination for a documentary. This inventively conceived film loosely follows a three act structure - a valentine to mom, hunting down rumors, and dad - but Polley otherwise explodes the typical documentary format, using actors to recreate 'home movie' flashbacks, showing the filmmaking process and continually surprising us with revelations and insights. The director includes herself as well, but not just as the 'voice behind the camera.' Polley begins by telling us she's had her dad Michael write down the family history, then shows us a studio where she's asked her dad to read his work (amusingly, she 'directs' him, occasionally asking him to repeat lines). Dad tells of the vivacious woman he acted with whom, he speculates, fell in love with the character he was playing. They were such opposites in real life, her a party-loving extrovert, him a loner introvert, he feels she began to feel stifled. As various siblings and former colleagues share recollections of Diane, Polley shows us an animated woman (Rebecca Jenkins, jazz-handing, who could actually pass for Polley's mom) For a while Polley's film recalls Rory Kennedy's documentary on her mother, "Ethel," both always smiling and energetic despite the demands of large families. But things shift when Sarah gets her brother Mark to recall a phone call he overheard Diane making, one that suggested a worrisome pregnancy. The name Geoff Bowes begins to keep recurring, a red-haired actor just like the filmmaker. Sarah meets with Geoff, things take another twist and recollections begin to contradict each other, sometimes hilariously so. Director of cinematography Iris Ng, shooting on Super 8, helps the director maintain visual interest with interview subjects and recreations. The film is a little long, sagging just a bit before roaring back with a satisfying conclusion. What is perhaps most surprising about Polley's film is that what began as a memorial to mom ends as a love letter to Michael Polley. "Stories We Tell" packs more humor, drama and emotion than most fictional dramas and clinches Polley's status as a world class filmmaker. Just what will she come up with next?

Director Sarah Polly began her career in filmmaking as an actress, getting acclaim in Atom Egoyan’s 1997 film, “The Sweet Hereafter.” She donned the director’s garb with her Oscar-nominated tyro debut, “Away from Her (2006)” and reasserted herself as a competent and talented director, too, with “Take This Waltz (2011).” With her latest effort she eschews traditional fiction filmmaking with a documentary account of the multifaceted life of her mother, Diane, and how she impacted all the lives she touched in “Stories We Tell.” Sarah Polley delivers what could have been a self-indulgent examination of the life of her bohemian mother, her marriage to Michael and all of the possibilities of who is Sarah’s birth father. Polley, the director, weaves the ramblings of those close to Diane and she examines the possibilities of just who is her biological father. The focus of the film, though, is on Diane as her daughter Sarah interviews her father, Michael, her siblings, family and friends and asks each to: “tell the whole story [about Diane] from start to finish.” Every interviewee tells their story about Diane but none of them match. The film is one of remembered perceptions rather than remembered fact and keeps your attention from start to almost finish – the 108 minute doc could have been cut to 95 minutes. The last 10 of 15 minutes is simply an extended wrap up/epilogue. This is minor criticism for this heartfelt tonal poem to her mother. Besides the extensive interviews with the abovementioned family and friends, Polley uses “home movies” to tell Diane’s story, using actors to recreate her mother’s past life before she died. The actors portraying Diane, younger Michael and other participants are beautifully matched to their real life counterparts and the impact on the film and story is substantial. Sarah Polley has quietly and steadily proved that she is a filmmaker to watch.