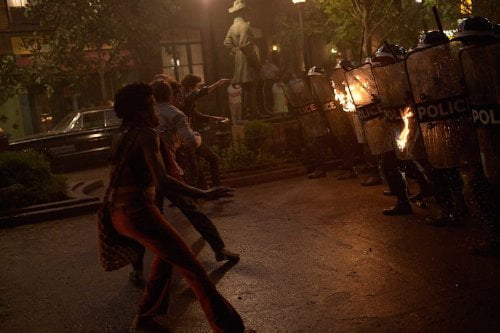 In the late 1960s the United States was in turmoil with assassinations, the Black Civil Rights movement and growing protests against the Vietnam War wracking the country. At the Stonewall Inn in New York’s Greenwich Village, a popular Mafia-owned bar whose clientele were often the most marginalized in the city’s gay community, another movement would end in a riot against armed police and begin the Gay Rights movement at “Stonewall.”

Danny Winters (Jeremy Irvine) was thrown out of his Midwest Indiana home by his father because he is gay. He flees to New York City, homeless and alone, where he finds himself drawn to flamboyant Ray (Jonny Beauchamp) and the small community of homeless LGBT. There, he meets other kindred spirits and is taken under the wing by gay activist Trevor (Jonathan Rhys Meyers). But, he also attracts the interest of the Stonewall Inn’s Mafia manager, Ed Murphy (Ron Perlman), who has plans of his own for the handsome Danny. I have never been a fan of director Roland Emmerich and his bombastic, overblown style of filmmaking. Best known for such films as “Independence Day,” “The Patriot” and “White House Down,” I was a bit confused about his making “Stonewall Inn.” His latest is an unexpected departure from his usual and it is an interesting look into the birth of the gay movement in America at that volatile time where it was against the law for gays to congregate or even buy a drink at a bar. In this fictional rendering of real events, Danny is the center of the film with his corn-fed good looks and shy naïveté and an attraction for his much more street savvy friends. The filmmakers spend most of the time on Danny and his battle to survive the mean streets of NYC. This is boiler plate story-wise (written by Jon Robin Baitz) as the young man has his eyes opened to what it means to be gay. He meets all manner of colorful (and otherwise) characters, some as friends and others, like Murphy, as decidedly not. This is pretty routine stuff but not what I was really here for. All of the build up, with police raids and arrests at the Stonewall a frequent occurrence, climaxes in the riots of protest at the bar and the devastation in the streets, spawning the gay movement for civil rights in America. This portion of the film is the big payoff but not enough as “Stonewall” spends an excruciatingly long time on a happily ever after coda (20+ minutes) about Danny and not enough of what followed after the riots. The filmmakers make a mild statement about gay rights but it lacks the edge to give “Stonewall” gravitas. There is an audience out there for this bit of American history but not a large one.