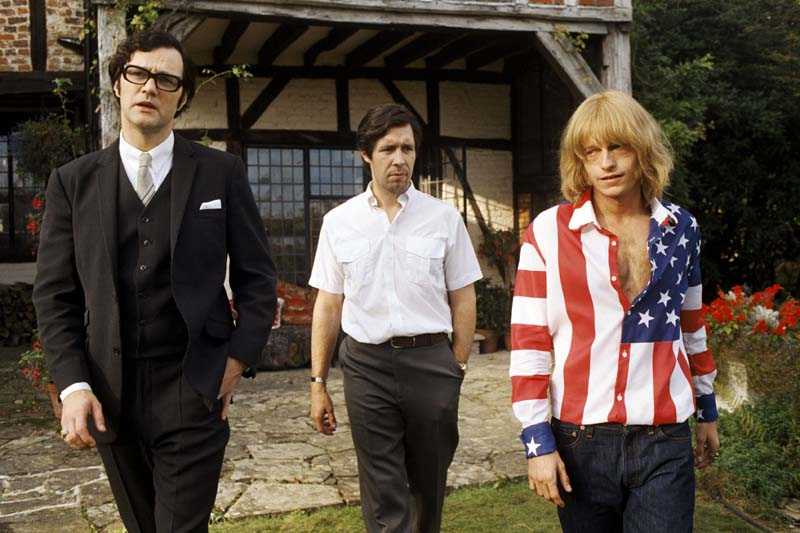 In 1962, nineteen year old Brian Jones (Leo Gregory, "Hooligans," "Tristan + Isolde") founded the Rolling Stones. Seven years later, after numerous drug arrests denied him U.S. access and a tempestuous relationship with Swedish beauty Anita Pallenberg (Monet Mazur, "Torque," "Monster-in-Law") ended with her in the arms of Keith Richards (Ben Whishaw, "Enduring Love," "Layer Cake"), Brian was fired by the now hugely successful band he'd begun. Just days after that, on Wednesday July 2, 1969, one of the great trailblazers of hedonistic hippiedom was found dead at the bottom of his swimming pool. Long time producer Stephen Woolley ("The End of the Affair," "Intermission") proffers a different take than the official one of the time in his directorial debut, "Stoned."

And the prolific British producer proves an inept director. "Stoned" is a hackneyed barrage of time warping psychedelia intermixed with a grade c television level recounting of the rise and fall of Brian Jones. Screenwriting team Neal Purvis and Robert Wade ("Johnny English," "Die Another Day") have done a decent enough job assembling the story in fragmented time as well as positing the idea that Jones was murdered by his builder Frank Thorogood (Paddy Considine, "My Summer of Love," "Cinderella Man") after the rocker subjected him to a dependent friendship festering with mind games and humiliation, but the film is a tiresome slog of uneven acting, artistry and technique. Jones is introduced in a red London phone booth snaring a replacement gig for his fledgling band. We see the Stones perform "Little Red Rooster" (in a recording done by session musicians) in black and white. Then Woolley whips us into a montage of the decadent sixties complete with S&M, ritualistic animal slayings in the Moroccan desert and plenty of nudity (there is so much full male frontal in this flick, one might think it was to add homoerotic subtext if Woolley had proven capable of adding subtext). Editor Sam Sneade ("Sexy Beast," "Birth") tries to go all "Performance" era Roeg, but only attains sensationalistic incoherence in these sequences. Brian's offbeat introduction to Pallenberg launches him into a high-flying druggie lifestyle. A black and white flashback of his father berating him for having gotten a fourteen year old pregnant does not establish his reportedly loveless childhood, although it does establish Brian's frequent success with the ladies from an early age. Back at Cotchford Farm, Brian's beloved Pooh Corner (it was the former home of A.A. Milne), Road Manager Tom Keylock (David Morrissey, "Derailed," "Basic Instinct 2") introduces his buddy, builder Frank to the property along with two hot chicks happy to be on hallowed ground. Frank, who has just finished work at Richard's property, reluctantly agrees to work for Jones, but quickly discovers the job doesn't end with construction. Tom plays with the purse strings while Brian toys with Frank's machismo and libido. Both advance an atmosphere of indulgence, then accuse the man for partaking. We never do know why Frank was so reluctant, nor do the Stones outside of Richards, played by the too baby-faced Whishaw, register much. Many significant details are assumed to be recognized by the ardent Stones fans that the filmmakers are rather than given some context for the less obsessive. Brian's current state is shown to have sprung from a Stones trip to Morocco. Despite his addiction to Anita, Brian cannot keep pace with her and Keith drinking and drugging and he goes overboard with free love and sexual experimentation, driving her into his bandmate's arms. But we get no insight into the man's musical importance nor the demons which surely inhabited him before he lost his lover. Gregory is okay balancing the good and the bad of Brian's persona as is Considine with Frank's conflicted confusion, but Woolley doesn't make the tale compelling and leaves his actors out to dry. Mazur, in particular, gives a very uneven performance as Pallenberg (although she surely does look the part). Tuva Novotny ("Close to Heaven") is a vacuous Swede hanging about the house in various states of undress as Brian's contemporary girlfriend Anna. Best are Morrissey as the slightly sinister enabler Tom and Amelia Warner ("Æon Flux," "Winter Passing") as Janet, the mistress he keeps stringing along and uses as Brian's nurse (she was one of four present on the fateful night). "Little Britain's" David Walliams ("Tristram Shandy: A Cock and Bull Story") makes an appearance as the Stones' accountant. The film has exactly one inspired scene. As we hear 'Lazy Sunday Afternoon' on the soundtrack, cinematographer John Mathieson ("Kingdom of Heaven") gives us a bird's eye view of Jones' estate in three parts. Frank and his workmen pour concrete in the yard, Brian's dog runs, taking us through the garden and down to the pool where Brian cannonballs into the center. Compare that to Brian's first LSD trip, set to the painfully obvious 'White Rabbit.' In fact, for a film about a famous musician, music is negligible to awful (score by David Arnold, "Four Brothers") and severely lacking in Stones tunes. Fade to black scene transitions are often so clumsy they look timed to allow for commercial breaks. "Stoned" is for fanatics of the material only, although it's possible getting oneself into the titular state may raise it up a notch. I can't be bothered to find out.

This is a surprisingly flat biopic that looks murky and fails to hold your interest. The problem is you really don’t care about the main character, Brian Jones (Leo Gregory), or his sordid life and suspicious death. None of the characters surrounding Gregory are compelling with Paddy Considine unsympathetic as Jones’s put upon builder turned errand boy. Director Stephen Whooley should have taken a page from Alex Cox’s “Sid and Nancy” in building a character study of the wild life of Jones. Instead of showing the downward spiral of depravity and self-indulgence that represent Brian Jones’s final days, we get a view of a man who is merely spoiled. His death is made ambiguous and does nothing to make you empathize with the Jones. The film feels almost amateur with its grainy look and the choppy story fails to grab and hold your attention. It’s for fans interested in the early days of the Rolling Stones but does nothing to show the varied personalities that made up the band – except for repeated references to Keith Richards and his own over indulgences. A better film on the final days of a rock star is the much more interesting and stylish “Last Days” by Gus Van Sant. I would rather be stoned than have to watch Stoned.”