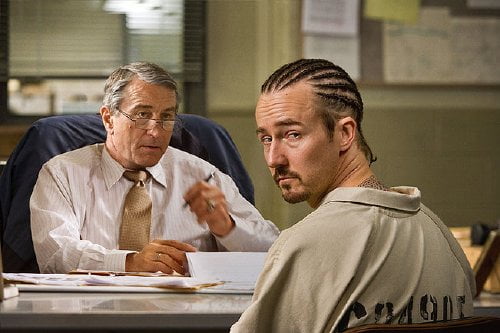 Jack Mabry (Robert DeNiro) has spent the last 30 years working in a Bible Belt state prison. A month away from retirement, he wants to wrap up his cases as a parole eligibility officer. One of his “clients” is Gerald Creeson (Edward Norton), a convicted arsonist doing his eighth year of a 10 to 15 stretch. Jack is a hard man to fool, however, and Creeson uses every tool in his inventory, even his pretty wife Lucetta (Milla Jovovich), to get out of jail in “Stone.”

This three-hander, directed by John Curran from the adapted screenplay by Angus MacLachlan (who authored the original play), is well acted by DeNiro, Norton and Jovovich. Edward Norton, especially, gives another fine performance as a man who cannot face doing the rest of his prison sentence. We meet Stone (Gerald’s nickname), hair made up in corn rolls, during his first interview with Jack. He is a volatile young man and impatient, something Jack does not take too well. Stone almost blows the interview when Jack reads him the riot act. Lucetta visits her husband in prison and Stone asks her to talk, directly, to Jack about his case. This is, of course, inappropriate and Mabry tells her in no uncertain terms when she tries to talk to him face to face. Lucetta, though, is a strong willed and sexy young woman and proceeds to seduce the older man. Meanwhile, the interviews continue and Jack has to decide if Creeson goes before the parole board or not. “Stone” is an actor’s film with the story taking a back seat to the thesps. The ongoing interview process, which seems to take weeks, feels contrived but gives Norton, in particular, a chance to show his chops as a serious actor. DeNiro does his usual working class schtick as the tough, thoughtful prison official who holds the lives of his assignments in balance. His decision will mean freedom or doing the rest of their time. Milla gives her Lucetta a character arc as she moves from carefree and fun in the beginning to more serious and affected by her relationship with Jack. Production is simple with Jack’s office, his home with his wife Madylyn (Frances Conroy) and Lucetta’s seedy flat the only locations. Photography, by Maryse Alberti, is of the extreme close up variety with the actors’ faces filling the entire screen, giving “Stone” a claustrophobic feel. Other techs are adequate. I enjoyed the acting but “Stone,” overall, runs flat.