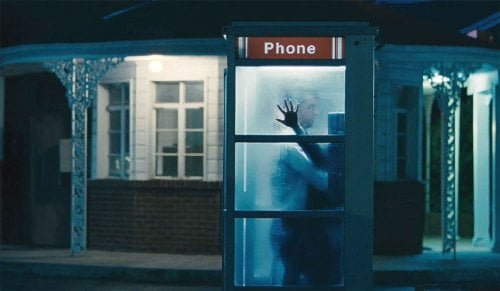 After the death of her father on her 18th birthday, India (Mia Wasikowska, "Jane Eyre") finds herself in competition with her hothouse mother (Nicole Kidman, "The Paperboy") for the attention of her dad's mysterious brother Charlie (Matthew Goode, "A Single Man"). India and Charlie have an awful lot in common, but he also wants to deliver her to what her father tried to save her from as the youngest of the family "Stoker."

Making his English language debut, Korean director Chan-wook Park ("Oldboy") has chosen a psychological thriller that plays like "The Royal Tennenbaums" as directed by Claude Chabrol. Actor Wentworth Miller's ('Prison Break') first produced script pays homage to Hitchcock's Uncle Charlie ("Shadow of a Doubt") with little dabs of "Psycho" (a motel, stuffed birds, reflections in a policeman's Ray Bans, a swinging cellar light, an unharmed fly) and a dollop of "The Bad Seed" for good measure, but the film impresses more as artful craftsmanship than emotionally satisfying thriller. Simply put, there's a lot more style than substance here. The film begins with India's internal realization that bearing no responsibility for who she is to become is the definition of freedom. This cannot be a good thing. The newly turned eighteen year old acts much younger, climbing a tree in her nightdress to open a white box wrapped in yellow ribbon (one which we later learn has held Charlie Brown-style saddle shoes every year - except this one). Meanwhile her birthday cake, all aglow with candles, is snuffed under a glass dome. Her childhood is gone yet she is trapped within her very hermetic world. Dad's death is announced by the agonized, muffled screams of his name by India's mother Evie at the phone. Later, graveside, India will see a man in the distance observing (don't movie funerals always include one of these?). It's Uncle Charlie, a man neither India nor her mother knew much, if anything, about. Once he decides to stay, lots of other people begin to disappear, and he has the oddest effect on the niece who had a special relationship with her dad and who does not like to be touched. India is like a larva about to burst from her cocoon, but what we get is not a butterfly, rather a death's head moth. Clearly, there's something sinister about the silkily smooth Charlie, and it's not just the timing of his appearance. He's a mentor figure, instructing his niece on the balance of power by their placement on the Stoker estate's foyer staircase. "Black Swan's" production designer Thérèse DePrez and Korean cinematographer Chung-hoon Chung ("Oldboy") work together to create the most provocative imagery here - two heads framed against a blank green wall, a spider crawling up a stockinged leg, a woman's hair being brushed turning into reeds in a field - and those images are edited together by Nicolas De Toth ("This Means War") in ways that circumvent time and space - an overhead light in the cellar swings and he cuts to family members at the dining table above becoming illuminated. Park's main actors are not going for naturalism here. Mia Wasikowska is as strange as the insects she has mounted under glass in her room. The actress says little, but conveys a metamorphosis with her observations - we can see her think, but we can't feel for her. The underrated Goode is beautifully cast, his smooth, unruffled appearance the perfect mask of immorality. Kidman has one attention grabbing speech, but the actress has played this type of brittle Patrician before. She does add to the film's neurotic, erotic tension though. We get far too little of Jacki Weaver ("Silver Linings Playbook") as Auntie Gin, as normal as a Stoker can be trying to sound the alarm for those pegging the meter. Dermot Mulroney appears in flashbacks as India's dad Richard, a man with one eye on the past and another on the future. The film also features Phyllis Somerville ("Little Children"), Alden Ehrenreich ("Beautiful Creatures") and blink-or-you'll-miss-him filmmaker Harmony Korrine. "Stoker" has all the elements of a creepy mind game, but its lifeblood is anemic. Thérèse DePrez is the star here, having created an eerie and unique world for Park's animated dolls to inhabit.