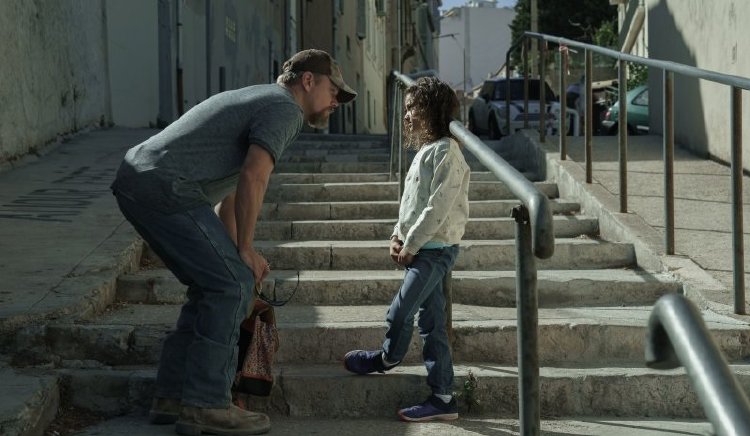 Unemployed oil rig worker Bill Baker (Matt Damon) leaves the familiarity of Oklahoma to support his estranged daughter Allison (Abigail Breslin) imprisoned in Marseilles for the murder of her roommate and lover Lena.  Like the real life Amanda Knox, Allison insists she is innocent and when she learns of a possible suspect named Akim, Bill's determined to find him. A new friend, French theater actress Virginie (Camille Cottin) with a young daughter Maya (amazing find Lilou Siauvaud) helps him navigate unfamiliar territory while also opening his blinkered American viewpoint in "Stillwater."

Cowriter (with Marcus Hinchley, Thomas Bidegain and Noé Debré)/director Tom McCarthy came up with this idea for a film based on the Amanda Knox case, but was never happy with the script he wrote some ten years ago.  He revived it with a pair of French screenwriters, wishing to set it in Marseilles and it evolved into a subversion of the American hero.  The screenplay has the feel of something patched together at points and the newer ideas, like the way Bill and his daughter now represent the thornier aspects of American influence abroad and how Bill is changed by his relationship with Virginie and Maya, are far more compelling than the original thriller material.  Matt Damon’s committed performance as the myopic, terse blue collar redneck whose determination to make up for past wrongs by saving his daughter goes a long way toward smoothing out rougher edges.

Stillwater is the city the Bakers come from, as noted early on when Bill glances at a gold necklace emblazoned with the name in an airport gift shop.  In Marseilles, he checks into a crummy Best Western hotel where two women in the neighboring room keep him up as they party on their balcony.  At the prison, Allison seems relatively happy to see him, but is most concerned that he gets a letter she gives him into the hands of her lawyer, Madame Leparq (Anne Le Ny, "The Intouchables"), and makes sure it is read.  Bill sets off on his mission, but is stymied early when told at Leparq’s office that she is in court all week.  Back at the hotel he finds a little girl locked out of the room next door and helps her get her own key.  Virginie, one of the women who’d kept him awake the night before, comes over to thank him for helping her daughter and apologize.  He asks her to translate Allison’s letter, which she does, including the part where Allison says she cannot trust her father to handle anything.  And then, when Leparq refuses to reopen the investigation based on Allison’s hearsay tip five years into Allison’s nine year sentence, Bill does exactly what Allison did not want, lying to her about Leparq in the bargain.

At first, Virginie throws herself into helping the American father of the girl everyone knows from her scandalous news coverage, locating the student, Souad (Nassiriat Mohamed), who’d implicated Akim, then enlisting a friend (Naidra Ayadi, "Polisse") to dig up party photos from Souad’s social media when the young girl is scared off.  But when Bill appears all to willing to overlook the truth at the expense of an immigrant, Virginie explodes.  She’ll relent later, when Bill is badly beaten trying to go it alone.  Bill, who finds construction work to keep himself afloat, moves in with Virginie and Maya, at first as a roommate of the most helpful kind, fixing things in the old building and picking Maya up every day from school.  His relationship with Allison heals and he brings his daughter over when she has a release day.  Bill is evolving, the English he was teaching Maya now the French she is teaching him.  The liberal artist and the American she cannot believe owns *two* guns fall into a relationship of their own.

Marseilles, with is mix of French coastal beauty and rough, graffiti laden neighborhoods, is a great setting for McCarthy’s cultural conflicts, Stillwater itself, especially as first depicted following a destructive tornado (a political metaphor, perhaps?), altogether more mundane.  We can see this contrast even in body types, the slimly built Cottin with a dancer’s grace versus the bulked up, inked and hulking Damon.  The worked over screenplay offers an abundance of detail, fleshing out the missing like Allison’s mother and Maya’s father, Lena described as someone making cultural assumptions and taking advantage of an American student.  But while characters are well drawn, the mystery plotting is sketchy, Allison’s tip shaky under scrutiny, Bill’s ultimate move a bridge too far, even for a ‘f&%-up.’  Overall, “Stillwater” still resonates with a deep sadness for a man who allowed himself to grow only to face dire consequences for his own happiness when he backslides.

Bill Baker (Matt Damon) has the weight of the world on his shoulders. The oil rigger’s hard life is turned upside down when his estranged daughter, Allison (Abigail Breslin), is jailed in Marseilles for murdering her friend and partner Lina. His regular visit to her takes a different turn when she gives him a letter identifying the real killer in “Stillwater.”

Tom McCarthy directs and co-writes this tale of a regular, blue-collar working guy whose life, tough as it was after his wife’s suicide and his battle with alcohol, is made more turbulent with Allison’s arrest and imprisonment in a foreign land.

The letter she gives her father offers a glimmer of hope and he goes straight to the government solicitor to get the case reopened. She refuses and tells Bill to accept his daughter’s fate. This leads Baker to take up residence in Marseilles, gets a job and work to free his Allison. (Matt Damon does a first-rate job playing a blue collar oil rig worker in way over his head in his quest.)

The clue from the letter, naming a young man, Akim, as the killer, begins Bill’s descent into a foreign world, with different rules and very real dangers. Oh, and Baker does not speak a word of French. How is he to navigate the system the system that he does not understand?
Maya (Lilou Slauvaud), his young next door neighbor, loses her key and Bill helps her get another. This kindness brings the girl’s actress mom, Virginie (Camille Cottin), to say thanks and he asks her to be his translator. What follows is a dual-threaded, interlocking story as Bill works to get Allison out of jail as he develops a nuclear family life with his new roommates. The two stories each explore their paths but things do not go as the viewer hopes, at least for this viewer.

There is sadness about Bill’s story as his ugly-American personality works against him in trying to do the right thing. The help and kindness of strangers plays prominent in the story but it is a melancholy tale of hope, love and, especially, loss. The players, from Damon and Camille Cottin to the diminutive Lilou Slauvaud (in a very convincing performance), are well cast and all are convincingly 3D people.