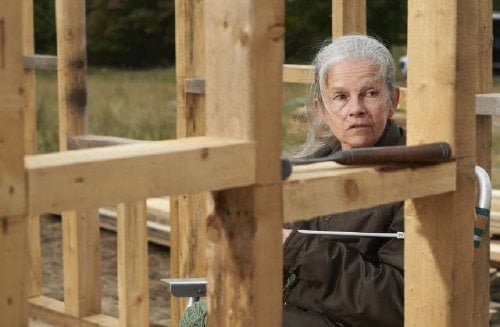 Craig and Irene Morrison (James Cromwell and Genevieve Bujold) are in their twilight years. Physically, they are fine for their age, but mentally, Irene is beginning to have memory loss that is getting increasingly worse. Craig wants to take care of his wife of 61 years and decides, all on his own, to build her a new, safe and compact home. The government bureaucracy, though, throws a wrench into his plans in “Still Mine.”

When he notices his wife of 61 years, Irene (Geneviève Bujold, "Dead Ringers"), is beginning to fail, self-sufficient farmer Craig Morrison (James Cromwell, "Babe," TV's 'American Horror Story') decides to build a small, one level house on land he owns overlooking the Bay of Fundy. Then his friend Chester (George R. Robertson) informs him he'll be in all kinds of trouble if he doesn't get a building permit. With Irene's memory and ability to use the stairs declining, Craig finds himself in a race against time that's thwarted every step of the way by building inspector Rick Daigle (Jonathan Potts, "Devil," "Dream House") in "Still Mine." Writer/director Michael McGowan ("One Week," "Saint Ralph") was having trouble completing a screenplay about a senior who refused to give up when he came across the true story of Craig Morrison, a man still intent on completing his house at the age of 91. While the story feels like it's been given a bit of a gloss, James Cromwell gives a great performance as a man who may be stubborn, but who also may be right while traversing emotions ranging from rage and frustration to tenderness, passion, pride and humility. As his wife, Bujold wavers in and out, giving a sense of the Irene that was and the one she will become. Their seven children are represented by two - son John (Rick Roberts), who enjoys a sensible, ribbing relationship with dad, and daughter Ruth (Julie Stewart), the naysayer who believes her parents can no longer live on their own. For those who thought "Amour" too sadistic or the recent "Unfinished Song" too sentimental, here's a senior love story with the realities of aging that falls right in the middle. The film begins where it ends - with Craig in court faced with jail time for his twenty-six building code violations and having ignored a stop work order. He asks the judge if he's a baseball fan, but we'll need to go back two years to see how he got there before we find out the reason for that question. Craig and his wife make do with a lot, their use of old, beat-up appliances to plant their vegetable beds bugging Ruth, who thinks their place has become an eyesore. Then Craig begins to face his uphill battle. It's bad enough that his cows get loose, blocking the road, because his fencing's come down, but Irene wonders who they belong too. Then he finds out he can no longer sell the full truckload of strawberries he's harvest because new regulations require them to be delivered refrigerated - despite the fact that they were picked a mere two hours earlier. This is the beginning of Craig's fight against a bureaucracy that defies common sense. We learn from John that his dad's on the frugal side ('open that wallet and introduce the moths to the 21st century' his lawyer Gary Fulton (Campbell Scott) advises when Craig complains of yet another multi-hundred dollar permit fee), but he tries to go along, filing with a local inspector. Then he finds out he needs plans drawn up. And the lumber he's cut and milled hasn't been stamped. Nor his joints done to plan. Yet Craig's the son of a shipbuilder, a man whose work is undeniably sound. All this and Irene falls down the stairs. Then she demands to sleep outside on the lawn upon her return. 'Not this. Now' Craig mutters, the same up-to-his-limit response we've heard earlier with a flat tire. The romance is spirited, including sex and a jealousy held by Irene from years past (they enjoy a hearty laugh when she's reminded the other woman died thirty years ago). The family is sprawling but connected, grandsons young (Kevin, 9) and older (Jeff, an engineer) stopping by to help, humorously bridging the age gap. Neighbors are supportive, Craig's competitive pal Chester coming through in unexpected ways, his wife Margaret (Barbara Gordon) making casseroles. "Still Mine" is a family film, not in that wholesome way but in that it speaks to and across multiple generations. That baseball question? One might think it pertains to Craig's famous ball, autographed by Babe Ruth and Lou Gehrig when he was ten, but Craig's got some spin up his sleeve and common sense and compassion prove a heady combination.

Watching the trailers, one gets the sense that this is a simple, based-on-a-true-story tale about one man against the system. “Still Mine” is that, sure, but it is more about the relationship and love between a man and a woman in their waning years (a subject, that, thankfully, is getting more attention these days, with films such as “Amour”). That love is palpable as Craig must accept the fact that, though she is physically healthy, he is losing her as Irene’s memory, at first gradually, fails. “Still Mine” is an excellent character study by usually character actor James Cromwell (the last thing I remember him as the star was in “Babe (1995),” and that was opposite a pig.) It is nice that someone as capable an actor as Cromwell gets a chance to shine in a starring role. Craig is a strong and stubborn man who refuses to give up on his goals – in this case to build a house for Irene. His battle with the building department of the port town of St. Martin makes for a different kind of drama from that of Craig and Irene’s personal tribulations. Genevieve Bujold has the tough role of a woman whose mind is slowly leaving her body. She is very effective in that character, Irene, though and gathers much sympathy. Campbell Scott (where has he been?) is solid as Craig’s attorney who supports the older man in his legal battles – gratis. The rest of the cast fleshes out the background, especially George R. Robertson, as Chester, Craig’s best friend and, often, his voice of reason. There is a palpable, though rocky, friendship between the two men that plays out emotionally without syrupy sentiment. Writer-director Michael McGowan creates a heartfelt love story in the guise of a solitary man trying to do something special for the love of his life but must to face off against a bureaucratic monolith that is out to stop him. The man-against-the-system story is good and hopeful, but the love story between senior citizens is the reason to watch “Still Mine.”