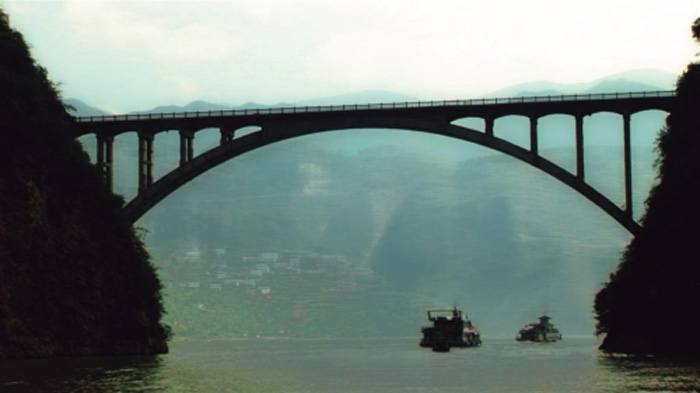 Han Sanming (Sanming Han) has spent the last 16 years working the coalmines in China. He decides to head back home to find his long-estranged wife and daughter but when he gets there he finds the town being dismantled and flooded by the enormous Three Gorges Dam project. He takes a job helping with the demolition while continuing his search for his family in “Still Life.”

There is an innate problem at the center of writer/directors Richard Glatzer and Wash Westmoreland's ("Quinceañera," "The Last of Robin Hood") movie. Once Alice is diagnosed, the only person who truly seems to care about her is the daughter she continually tangles with. Her husband seems inconvenienced, worrying more about an opportunity to land a position at the Mayo Clinic. Her eldest daughter Anna (Kate Bosworth, "Beyond the Sea," 2011's "Straw Dogs"), brooding over the hereditary aspect of mom's disease, is completely self-absorbed. Son Tom (Hunter Parrish, Showtime's 'Weeds') is a nonentity, as handsome yet hollow as the wealthy environs which surround them all. In this adaptation of Lisa Genova's novel, one is left wondering why anyone would want to be Alice to begin with. Somehow I don't think that's what the filmmakers were going for. Alice's world is one of family celebrations (it opens at her restaurant birthday dinner, continues on to Christmas dinner, then an anniversary) and classes. She and her husband seem to pass each other to sync their busy schedules. Anna may be expecting twins, but only Lydia seems to have her mother's full, hectoring attention. Lydia's moved to L.A. where she's invested in a theater group that shares equity. Mom's undone because the highly achieving Howlands all have impressive degrees except for Lydia. When Alice panics one morning, telling John she's afraid of losing herself, he seems surprised by the outburst. He comforts her, but when she later forgets a dinner with his department head, he only exhibits anger and annoyance. He and Anna sit and clinically discuss how mom will be cared for, a problem to be solved. But Lydia comes back to the East Coast and begins to spend a lot of time with mom. Moore is an exceptionally fine actress and her technical portrayal of a woman losing cognitive ability is first rate. Still, there is always an awareness of watching Julianne Moore, actress, rather than Alice Howland, character. She's touching when delivering a speech to an Alzheimer's Group, the irony of a woman known for her ability with language struggling to find words moving. Her last scene, however, is awful, cloying, sentimental and awkward, whether the failure of acting or direction difficult to pinpoint. The best thing about "Still Alice" is Kristen Stewart, the only member of the cast who creates a flesh and blood person. The young actress encompasses squirmy irritation in her bid for independence without showy rebellion, then real patience and compassion. It's a lovely piece of work. If only the rest of the film were as true. Grade:

Director Jia Zhang-Kie, who brought us the sumptuous The World,” brings his artistic eye to the famous dam project and the magnificent landscapes of central China while telling the simple story of Han’s search for his family. The combination of one man’s mission and the beautiful backdrop makes for a quiet but engaging story that captivates the mind and heart. As Han makes his inquiries about his wife’s whereabouts he meets all manner of people, both helpful and hostile. He integrates himself into the laborer role of deconstructing his rapidly flooding former hometown of Fengjie, eventually finding his ex-wife. They try to rekindle their past life but the changes each experienced over the years prove too profound. Meanwhile, Nurse Shen Hong (Tao Zhao) also returns to Fengjie to find her husband, missing for the past three years. These very personal stories amid the monumental changes taking place in the region make Still Life” a unique bit of storytelling. The elegant look of “Still Life,” gorgeously photographed by Nelson Yu Lik-wai, comes with the deft combo of simple articles, such as a 10-yuan banknote, held up against the stark beauty of the rapidly flooding landscape. Director Jia uses this device with stunning affect. This is not the kind of film that will be a seen at the local multiplex. In fact, you are going to have to search for it (much like Han searching for his wife) but the effort is worthwhile. Jia is proving to be a world-class filmmaker with a brilliant eye for both the small details and the big picture. The simplicity of the story dominates the foreground but it is Jia’s ability to set it against the gorgeously composed background that makes “Still Life” a pleasure. The acting is minimal and conveys the tale with a natural touch. Han is the main focus of the story and you feel his hope and frustration as he splits his time between his search and his labor. Nurse Shen’s story is much slighter and less fulfilling than Han’s and could have been dispensed without detrimental affect. Still, the beauty of the film is well worth the price of admission.