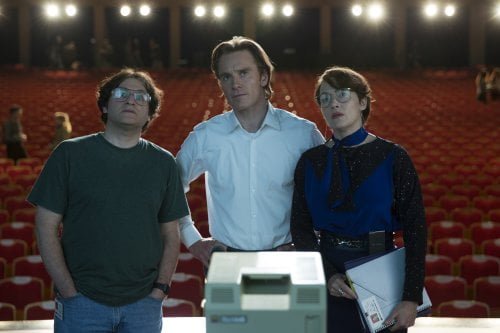 Just before its public launch, lead programmer Andy Hertzfeld (Michael Stuhlbarg, "A Serious Man") cannot get the Macintosh to say 'Hello.' There were other problems behind the scenes that day, like Apple cofounder Steve Wozniak's (Seth Rogen, "The Interview") ignored plea to recognize the IIC team that kept the company afloat during the Mac's development or the mother, Chrisann Brennan (Katherine Waterston, "Inherent Vice"), begging to get off of welfare and be able to afford heat for the 5 year-old daughter, Lisa (Makenzie Moss), whose obvious paternity was denied by Apple's "Steve Jobs."

Screenwriter Aaron Sorkin ("The Social Network") may have begun with Walter Isaacson's book, but what he's created is a kind of technological "A Christmas Carol," Scrooge's ghosts visiting during the launches of the Macintosh, the NExT computer and the iMAC, points in time for Jobs (Michael Fassbender, "12 Years a Slave") to absorb his own shortcomings and evolve, his daughter Lisa Sorkin's Tiny Tim. It's a bold move, a three act impressionistic distillation of a seriously flawed creative genius that crackles and pops with emotional energy and Sorkin's patented rat-a-tat dialogue. Just like the screenplay, which favors essence over strict fact, Fassbender may not look like Jobs but one quickly forgets, so keen is his performance and while many may be unfamiliar with Macintosh marketer Joanna Hoffman, Sorkin uses her as the second woman who was a driving force in Jobs's life, his 'workplace wife.' Kate Winslet, employing a subtle middle European accent, steals a film whose ensemble cast is one of the year's best. Each act begins backstage as Jobs is about to present a pivotal product. Some people come and go, but Lisa, Joanna, Woz, Hertzfeld and former Apple CEO John Sculley (Jeff Daniels, "The Martian") remain constant. Jobs, whose own adoption caused him great turmoil, confounded those around him by his denial of Lisa (played at 9 by Ripley Sobo, "Winter's Tale") and 19 by (Perla Haney-Jardine, "Spider-Man 3"), the latter two pointing towards the development of the iPod). Joanna, one of the few who could successfully stand up to Jobs, is tormented by this. Woz radiates the warmth and loyalty Jobs lacks. Hertzfeld is the only man to cross Jobs's work/life barrier, his third act boundary over stepping the catalyst to the climax. The poorly treated Sculley, hand picked by Jobs, is a father figure whose failed Newton during Apple's Job-less years is clearly the forerunner of the iPhone. Sorkin's approach is actually more satisfying than Alex Gibney's recent documentary takedown as he artfully weaves causes and effects of both Jobs's psychological makeup and creative inspiration. His and Fassbender's Jobs is aware of his shortcomings ('I'm poorly made') and how that drove him, his control issues spawned by his adoption manifested in his 'End-to-End' Mac architecture as well as the financial strings he used to manipulate Chrisann and Lisa. Even his behavioral anomalies have underlying goals. The only misstep here is leaving us with a 'happy' ending, one which is built towards as the acts progress (just like the Dickens tale). Danny Boyle ("Slumdog Millionaire") keeps the action fluid, mirroring Jobs's favored 'walk and talk' style, concluding each act with a stationary emotional exchange before Jobs walks out to ever increasing audiences more thunderous in their adulation ('all the world's a stage'). The three acts fly by, so rapid and propulsive is the pace. There are occasional flashbacks sprinkled throughout, visualizing events under discussion (the most profound being when Sculley asks Jobs about his birth father). If at first you believe there is something wrong with the movie you are watching, note that cinematographer Alwin H. Küchler ("Sunshine," "Hanna") portrays the evolution of the computer age by switching visual media, 1984 shot on grainy 16mm, 1988 on lusher 35mm while 1998 is digital. It's an interesting idea, although it would have worked better had the device been more historically parallel. Apple marketing is prominently used and commented upon, from the infamous 1984 Mac ad to the iconic figures used during the 'Think Different' era (the Alan Turing connection to Apple's logo is debunked within the film). The film is a spiritual companion piece to Fincher's "The Social Network," Daniel Pemberton's ("The Man from U.N.C.L.E.") score even echoing its synth and bell tones. Grade: