Steve Jobs: The Man in the Machine 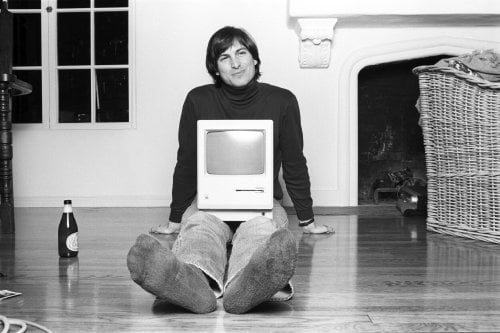 When Steve Jobs died on 5 October 2011, the world went into mourning with an outpouring of affection and sorrow. Documentary filmmaker Alex Gibney asks the question – why? – and tries to find the answer to that question with “Steve Jobs: The Man in the Machine.”

Scientologists condone slave labor and evade taxes, Lance Armstrong lied, Julian Assange has a big ego and denies others credit while promoting Wikileaks as a tool for the public good and the CEO of Enron withheld vital information from stockholders. These facts were all learned from Alex Gibney documentaries and now he's back with his third release in 2015 to tell us that Steve Jobs has done all these things and more! This is a thoroughly researched and expertly assembled piece of work, but all of this information has been out there for some time (most actually relayed in the 2013 Ashton Kushner "Jobs" movie). Gibney's inspiration was the outpouring of public grief for Jobs upon his death in 2011, a phenomenon that clearly got his dander up and which prompts him to begin this work with a simple question, 'Why?' That question is never answered in "Steve Jobs: The Man in the Machine." One thing Gibney does do is repeatedly hammer away at Jobs's vocalizing of Apple's 'core values,' values which are difficult to determine. The man who loved all things Zen and literally wanted to become a monk (he believed he was 'enlightened') may have loved streamlined purity, but compassion wasn't among his strong points. Marketing and product design were, however, and Jobs's use of figures like Gandhi to promote his 'think different' campaign seems to have reflected back upon him in the public eye. His forward thinking campaign to connect the world in a sharing of ideas has ironically promoted isolation. One of the best quotes Gibney gets is from Jobs's former girlfriend and mother of his daughter Lisa, Chrisann Brennan, who observes that he had trouble connecting with other people so went on to connect everyone through machines. (She also discusses the concept of 'the golden shame,' which is trying to enter enlightenment with one's ego still intact.) If one knows little about Apple and its cofounder, this documentary provides exhaustive information. Others may find it redundant. Maybe the audience for this is for all those who mourned the loss of Steve Jobs, a visionary, true, but also a petty egoist and sometime bully with no sense of loyalty. Grade:

Gibney has, for years, gone after persons and institutions when things questionable about his subjects arise. “Going Clear: Scientology and the Prison of Belief” revealed the sordid underbelly of that religion and “The Armstrong Lie” with interviews with the 7-time Tour de France champion that uncovered his use of performance-improving drugs while competing. With “Steve Jobs: The Man in the Machine,” the documaker delves into the life of Steve Jobs form this adoption in 1955 through to his end, the victim of cancer. The film is an accurate, though slanted, look at Jobs through Gibney’s critical eye. All the details of the entrepreneur’s life, cut off at age 56, are laid out in detail with all the considerable successes and failures, as well as all his foibles – and these are many. He lied to his partner, Steve Wozniak, about how much money they earned selling one of Woz’s designs to Atari in the early 70s. He denied paternity of his daughter, Lisa, with his girlfriend Chrissan Brennan and refused, for years, to pay child support. These are just the tip of the iceberg as Jobs ruthlessly rose to the peak of power in not just one but several major industries. Gibney also tracks the string of products that Apple produced and sold over the years since its founding. The Apple II shook up the world of personal computers and personal entertainment, as did the Mac, iMac, iPod, iPad and its smart phone. The man’s successes are obvious but the ruthlessness in the man that strikes fear in the hearts of Apple employees worried about currying his disfavor. All in all, “Steve Jobs: The Man in the Machine” puts a negative spin on Jobs’ life but never answers the question “why the adoration?”