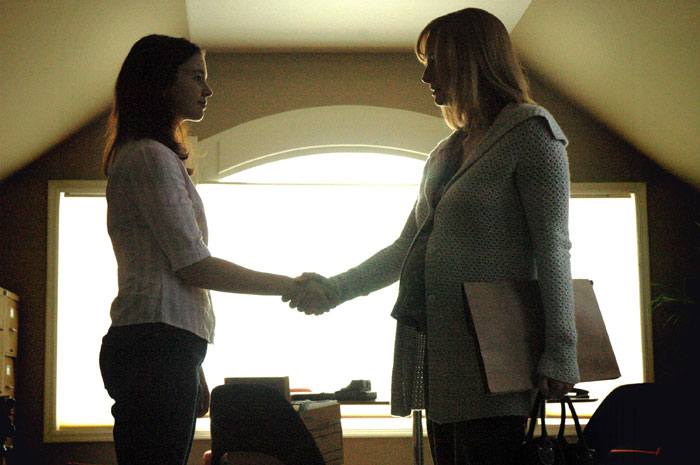 Forensic psychologist Lydie Crane (Tilda Swinton, "The Chronicles of Narnia: The Lion, the Witch and the Wardrobe") is twenty-nine weeks pregnant when she's brought onto the prosecution's case to make an unbiased opinion whether a sixteen year old girl killed the twenty-six week old fetus she tried to hide after giving birth on a school ski weekend. No one knew the girl was pregnant, perhaps not even "Stephanie Daley."

Writer/director Hilary Brougher raises her subject above after school special level with her unusual approach to her subject - "Stephanie Daley," while taking a serious look at peer pressure, date rape and the dangers of sexual naivety, actually concentrates instead on the inner world of the psychologist who examines her. Daley is introduced as the sullen child of religious and supportive parents (finely acted and distinctly characterized by Melissa Leo ("21 Grams," "Hide and Seek") and Jim Gaffigan ("13 Going on 30," "The Great New Wonderful")). Crane is direct but kind with the teenager and Stephanie's story is told in a series of flashbacks as she relates her story during a series of sessions. Meanwhile, we see Lydie's story progress and discover that the near due professional's life is in every bit as much turmoil as the young girl's. Stephanie is a shy girl whose first real attempt to mix with the opposite sex connects her with an older guy, Corey (Kel O'Neill, "Domino"), a smooth seducer a more experienced girl would recognize for the predator he is. Stephanie draws inward after the encounter, but does not consider pregnancy because he didn't come. Lydie, who at first appears to be a well adjusted yuppie, we soon learn became pregnant just three months after a still birth. Her husband Paul's (Timothy Hutton, "The Good Shepherd," "The Last Mimsy") words are supportive, but Lydie, already in a state of doubt over the tenacity of her unborn child, finds an alien earring in the couple's bathroom and is met by the admiring Frank (Denis O'Hare, "21 Grams," "Half Nelson"), sent on Paul's behalf, at a birthing class. The fine actress, Tilda Swinton, who never seems to age and who once appeared nude on screen immediately after giving birth to twins in real life, does a fine study of a heavily pregnant woman burdened with doubts having to find empathy for a teenager who may have done the unthinkable. For her part, Amber Tamblyn, a long way from "The Sisterhood of the Traveling Pants" here, is also quite good portraying a lamb unwittingly crossing paths with a wolf and the confusion which fuels her subsequent actions. When director Brougher finally stages the climatic birth, she segues from "Silver Bells" to hard rock to only the sounds of straining plumbing, leaving the young actress to express the horror of the situation and it's a jolting scene. "Stephanie Daley" isn't entirely successful, however. Brougher sets up that telltale earring so obviously it is risible, a problem which could have been easily overcome. A deer used as metaphor between the two woman (Stephanie claims to have heard one in trouble, Lydie crashes into one on a dark road), doesn't really work and the final session, with the exception of its flashback, should be cathartic but is not. Still, this is a fine and foreboding duet of character study.