Step Up to the Plate (Entre les Bras) 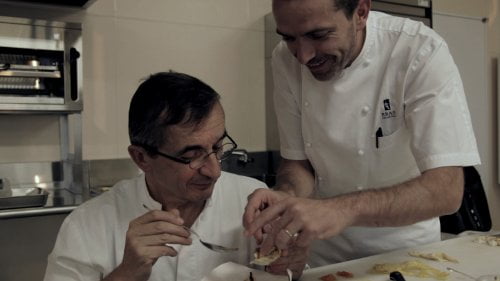 Chef Michel Bras is the owner of a 3-star Michelin restaurant in the beautiful Aubrac region in the south of France. But, his son Sebastien has worked with him for 15 years and it is time for the reigns of leadership to change hands, not an easy thing for Michel to do when he has to finally “Step Up to the Plate.”

When Michel Bras, the owner of the three star Michelin restaurant which bears the family name in the Aubrac region of France, decides it's time to retire, his son, Sébastien, who has been working with him for fifteen years, still struggles to "Step Up to the Plate." With all the reality television shows based around chefery, theatrical documentaries on the subject are on an upswing. Last year gave us "Kings of Pastry," and this year has already seen works on El Bulli and "Jiro Dreams of Sushi." The Japanese sushi master's story was also one about fathers and sons, but director Paul Lacoste ("Inventing Cuisine: Michel Bras”), making his feature debut here, is ofttimes more enamored with symbolic imagery than informational clarity. That's not to say we aren't presented with insights into the growth of a master chef, but some aspects of Lacoste's film work better than others. He opens with the composition of a salad, built ingredient by ingredient into a carefully arranged work of art. Later we see that both father and son meticulously chart out their plate presentations, not unlike creating a paint-by-number template. We are given montages of family stills to see how four generations of the Bras family are involved in the service industry. The wives of both father and son offer reflections on their front of house roles as well as the incorporation of their children into the family business (freedom of choice is stressed by both). And yet the retirement which is the lynch pin of the entire documentary is barely touched upon, and that not until well into the film's run time. Neither do we get a strong sense of what went into the building of the Aubrac restaurant compound or the family's living arrangements. Lacoste gives us extended shots of both men staring out over the landscape, clearly finding inspiration in nature and their environment, but did he really have to show the sun rising on Sébastien and setting on Michel? These sequences are more than a bit heavy handed. A switch to a Bras restaurant in Japan is sudden and surprising, but we get less information about the underlying differences than we do about Jiro's son's photo negative copy of dad's restaurant in that film. We also get less of a sense of the father/son relationship. Michel criticizes every last detail, any praise coming almost inadvertently, but we don't know how his son feels about this. We see Sébastien struggle to create his own dish in both a French and Japanese version and while this is compelling stuff, the final dish presented is not only quite different, we have no idea who it is being presented to (the media? a competitive jury?). Better is Lacoste's tie-in of the three elements of that dish back to the three main influences on Sébastien's cooking - his grandmother, his mother and dad. Ultimately, while "Step Up to the Plate" may be pleasing to the palate, it's never fully satisfying. It's an impressionistic piece where classicism may have yielded more.

Documentary filmmaker Paul Lacoste is supposed to be making a film of the changing of the guard, from father to son, in one of France’s renowned restaurants. Really, though, as far as the film is concerned, it is a fait accomplis that Sebastien has taken over for his father in all but name. As such, Lacoste concentrates most of his camera time on the younger Bras. Unfortunately, much of this time is spent on artful shots of Sebastien staring into the sunrise or sunset as he inwardly reflects on his life, his dreams and his ambitions. Michel makes for a more interesting character in this passion play as we see his doubts over his decision to relinquish hold of his beloved restaurant and his fears of not being the one who decides the course (and courses) of his establishment. He is a sympathetic figure and one who embraces tradition - a thing his son wants to break away from. I really wanted Michel to take the reigns back from Sebastien as the film progressed. Lacoste divides “Step Up..” by season, starting with Summer, and here the groundwork of the story of family transition is told well. We see the time-lapse construction of one of their gastronomic creations and it is art in the making. Colors, textures and presentation are foremost in the plating and one can assume, with a Michelin 3-star rating (it does not get better than that), it will also be complex and delicious. Watching this artwork created, repeatedly, for serving is like watching an artists’ assembly line of visual culinary delights. When we get to Winter, though, the scene shifts to Restaurant Bras in Toyo Japan, the Bras family’s latest project. Here, the tone and mood of the film shifts away form the changing of the guard to both father and son working to get the new business in order. This part focuses on Sebastien trying to reinvent his French dishes into something distinctly Japanese. He asks for his father’s opinion and they collaborate on the structure and components of the new dish. It is a different viewpoint from that intended in the beginning. “Step Up to the Plate” begins as the story of a generations-long business being handed from, once again in the Bras family, father to son. When it loses sight of this change of hands story, the film loses its direction, making me want it either back on track or over. The food looked gorgeous, though.