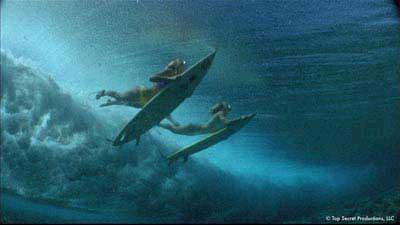 'No special effects. No stuntmen. No stereotypes.' Director Dana Brown, son of the man who crafted seminal surf docs "The Endless Summer" and its sequel, hits worldwide surf spots, including those as unconventional as Ireland and Lake Michigan, to showcase the many different breeds and motivations of surfers while also tying them together with the spiritual allure of the sport. Cinematography for "Step Into Liquid" should be declared a sport as well, as Brown gets us up close and personal from both above and beneath the waves that challenge his subjects with a spectacular finale 100 miles out at sea.

As Brown documents the professionals, the various tribes, the women high-wavers, the families that surf together and those that use the sport for therapy, though, one is left feeling that the material is still a few steps away from being shaped to its best potential. It meanders too much, one subject spilling over onto another, muddying the waters. A father and son trip to Vietnam sequence begins to almost try patience. There's some nice story to it, but it feels like the director, having traveled that far, couldn't cut the footage that didn't add to his film. Sometimes Brown drops a thread just as it gets interesting, such as when a female surfer tells us that 'sometimes the guys get aggro' accompanied by footage of a man pushing a woman off her board. Brown cuts to an entirely different subject when one wishes he'd explored this one a little bit longer. Still, "Step Into Liquid" follows many threads that could have supported a documentary unto themselves, such as the story of Dave Weber, a man who noted a rare February with five Sundays twenty-five years back and vowed to surf every day until one occurred again. A bunch of Texans chase the waves of supertankers and surf for distances of up to two miles. A Lake Michigan enthusiast asserts that they can get barrels so big they would hide a Volkswagon. Brown does reward his audience at film's end, when a group of surfers we've come to know charter a boat to head out and catch rare and legendary waves in the middle of the ocean. One rides an immense wave that we're told experts have estimated at 66 feet and we can't help but share the exhilaration of these daring athletes.