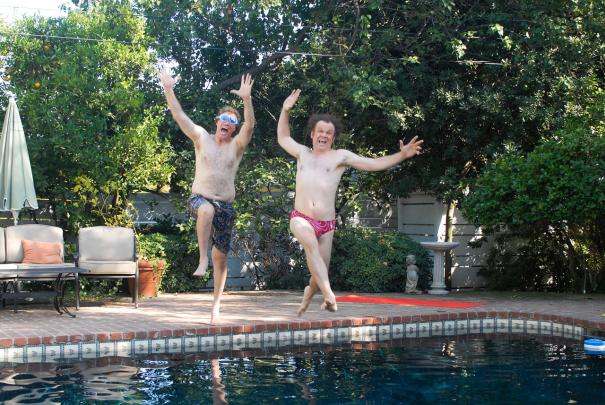 'Families is where our nation finds hope, where wings take dream.' George W. Bush When Dr. Robert Doback (Richard Jenkins, "The Visitor") spies Nancy Huff (Mary Steenburgen, "Marilyn Hotchkiss Ballroom Dancing & Charm School," "Honeydripper") in his lecture audience, it's love at first sight and they quickly discover they have much in common, including middle-aged sons who still live at home. After the two marry, Dale Doback (John C. Reilly, "Walk Hard: The Dewey Cox Story") is just as displeased as Brennan Huff (Will Ferrell, "Semi Pro") that the status quo is about to be shattered now that they are "Step Brothers."

The "Talladega Nights" team of Will Ferrell and director Adam McKay let their inner eight year-olds out with "Step Brothers" and the resulting movie is as much fun as being locked in a room with a pair of sexually precocious brats. Sure there is some fun to be had hearing Mary Steenburgen let rip with a string of four letter explitives and the film convinces of Oscar-talked Richard Jenkins's versatility, but there are exactly two scenes in "Step Brothers" featuring anything resembling comic inspiration and neither of them rests on the film's two stars. Brennan's a crybaby who gets picked on by Dale and the two decide they hate each other immediately. This leads to foul mouthed insult trading, territorial spats and general destruction of property. Things change when Brennan's younger brother Derek (Adam Scott, "Monster-in-Law," "Knocked Up") and his family come to visit. Brennan informs Dale that he hates his real brother even more than his step brother and retreats to Dale's tree house (we learn in a flash back that Brennan's big solo at a school show was disrupted by Derek and his friends yelling 'Brennan has a mangina'). In the family car, Derek is leading a family harmony, well trained daughter and son performing like champs in the back seat while zombie-like wife Alice (Kathryn Hahn, "Anchorman: The Legend of Ron Burgundy," TV's "Crossing Jordan') is chided for her flatness. Derek proceeds to charm Dale with name-dropping and flattery, but Dale recognizes him for what he is and punches him right in the fact. This causes him and Brennan to bond and Derek's wife to come onto him big time. But Derek's also offered to sell the Doback home for 30% over value to fulfill his stepdad's dream of sailing around the world with his new wife, so Dale and Brennan must face adult responsibility for the first time. There might have been a better movie observing the Huff brothers, because Adam Scott's Derek is funny and repulsive where Ferrell and Reilly generally are not. Sure, they get the arrested development thing down pat, but the sight of two fortyish guys getting beat up in a schoolyard by kids a quarter of their age just doesn't bring the belly laughs. Neither does Dale's rape in a restaurant bathroom nor Brennan's delusion that his shrink Denise (Andrea Savage, "The Grand") is his girlfriend. The film's final scene, where the boys, now behaving like grown-ups (more or less), are brought back together, just as mom and dad are (the two had split), is jolted by Jenkins, who reveals his own hilariously nonsensical loss of adolescence. He and Steenbergen also work the event name, the 'Catalina wine mixer,' for all its worth. Perhaps the intent was to satirize the recent romantic comedy trend of Peter Pan-like males by pushing the concept over the top, but whatever the reason, bratty, childish behavior just isn't funny, no matter how profanity-laden it is. Ferrell and Reilly may be good at it, but that doesn't make it worth watching.