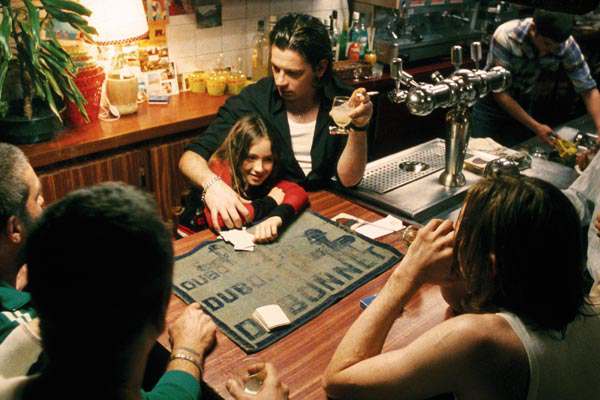 Writer/director Sylvie Verheyde's revisits her eleventh year in 1970's France as the street smart child of blue collar cafe workers given a shot at a superior education in a 'rich kids' school in Paris and calls the filmic version of herself "Stella."

The French mini-movement exploring the workplace and the modern day anxieties over its instabilities that began around the time of Laurent Cantet's 1999 "Human Resources" seems to have segued into a natural offshoot - that of education. Back in 2004, Abdel Kechiche explored class within a high school environment with his "Games of Love and Chance (L'Esquive)," and things only ramped up with last year's Cannes winner "Class." Three of the Nine films we are previewing for the 2009 edition of the MFA's French Film Festival are focused on school life beginning with "La Belle Personne." "Rumba" is an excellent bridge between the 'loss of job' and educational genres as disaster causes a married English teacher and gym instructor to become unemployed. With "Stella," we come full circle back to "L'Esquive" as a young girl of blue collar circumstance is given a leg up in a Parisian school where her home life and poor scholarship ostracize her except for the friendship of one. In her new school, Stella (Léora Barbara) observes that her new classmates look 'sheltered,' unlike her. Stella returns home from school and takes her place in L'Aquaduc among her parents' regulars, mostly rough types like ex-con gang leader Alain Bernard (Guillaume Depardieu, "La France," "The Duchess of Langeais") upon whom Stella has a crush. She plays cards and shoots pool with these types, but not everything is rosy as attractive mom Rosy (Karole Rocher, "All About Actresses") has become unhappy in her marriage to Stella's dad Serge (singer Benjamin Biolay, a French Benicio del Toro). Stella strikes up a friendship with Gladys (Mélissa Rodriguez), another girl not quite like the rest of the class as she comes from an intellectual Argentinian Jewish household. Gladys is the smartest in the class and although Stella's early grades are all failures, she begins to aspire to Gladys' intellectual sophistication and begins reading the classics on her own. Sleep overs expose each other's radically different lifestyles, both seeing the other's as exotic. Then Stella is set in a new light when she's sent to vacation in a remote, rural village with her grandmother where her lifelong friend Geneviève (Laëtitia Guerard) is another outcast due to her jobless, alcoholic parents and pack of siblings including a mentally retarded brother. Here Stella is the sophisticated 'rich' one, hailing as she does from Paris. When Stella returns home, her confidence has been built up and she 'crashes' the birthday party of the swank Nathalie Corbier with Gladys, who was invited, and draws the attention of the party's best-looking bad boy. The end of the school year if not exactly a triumph proves a journey towards a more hopeful future. Verheyde does a terrific job conveying the mind set of an eleven-year-old girl with expert direction of a talented trio of inexperienced actresses. Léora Barbara has the blooming prettiness of a young girl who can draw the wrong kind of attention without seeming beyond her years and the actress successfully portrays both a fish out of water and a denizen of her own element. It's a quiet performance, driven by eyes and downward glances. Rodriguez and Guerard are equally good in supporting roles. Rocher is terrific as the mom with an ever so slightly tough exterior who yearns for more and goes after it with infidelity while Biolay is a charismatic sad sack who prefers to act as the cafe's entertainer at large rather than its owner. Depardieu, who died tragically last year at the age of 37 (he's also featured in "Versailles," a film we did not preview for this edition of the fest, although strangely, his dad is nowhere to be seen this year), is perfect at the object of Stella's affection, a tough guy who treats a little girl as his equal. Jeannick Gravelines is extremely creepy as Bubu, a lodger who pays Stella too much and the wrong kind of attention. Johan Libéreau ("Les témoins") plays Stella's older brother Loïc, but in one of the film's few weaknesses, it is unclear whether he is related or cafe help despite the sympathetic ear he lends Stella. "Stella" is very reminiscent of last year's entry "Blame It on Fidel," coincidentally starring Guillaume's sister Julie Depardieu. That film has the slighter edge due to the addition of its political insights and natural comedy, but "Stella" is a riveting, if rougher, portrait. They'd make a great double bill.