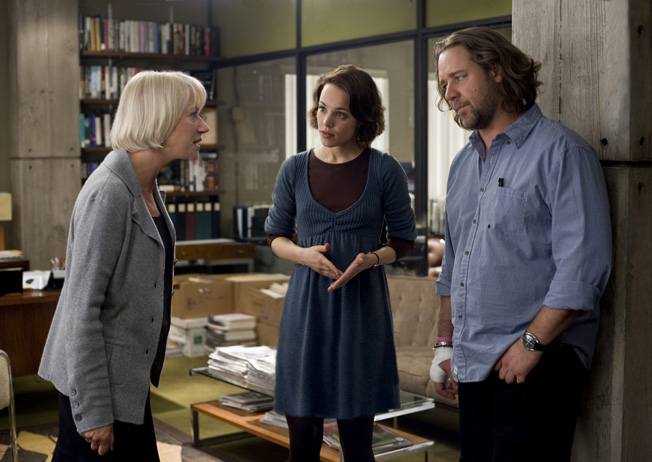 Two seemingly unrelated deaths in Washington DC attract the attention of savvy, smartass ace reporter Cal McAffrey (Russell Crowe). One of the victims, Sonia Baker (Maria Thayer), is the assistant and mistress of Cal’s old college roommate, US congressman Stephen Collins (Ben Affleck), and information surfaces that her death may not have been the accident everyone presumed. The more he digs, the more McAffrey believes that he has uncovered a conspiracy of unprecedented proportions. With the help of cub reporter Della Frye (Rachel McAdams), Cal will risk their lives to get the story in “State of Play.”

Adapted from the six hour BBC television series (by Matthew Michael Carnahan ("Lions for Lambs"), Tony Gilroy ("The Bourne" series, "Michael Clayton") and Billy Ray ("Breach")), "State of Play," directed by a Scotsman and featuring only one American among its four leads, is that Hollywood rarity - a solid, satisfying, intelligent newspaper murder/conspiracy thriller released by a major distributor (Universal). This is the kind of mainstream movie that usually only gets play jockeying for Oscar nominations. Cal McAffrey (Russell Crowe, "Gladiator," "Body of Lies") is an old school print journalist who gives his editor Cameron Lynne (Helen Mirren, "The Queen") heartburn and newbie blogger Della Frye (Rachel McAdams, "The Notebook," "The Lucky Ones") insulting brush offs. After visiting a crime scene where a man was killed and a pizza deliveryman barely survived a gunshot, Cal heads into the office and finds himself in an interesting position. A possible political scandal is brewing around Congressman Stephen Collins (Ben Affleck, "Changing Lanes," "He's Just Not That Into You"), whose lead researcher Sonia Baker (Maria Thayer, "Accepted," "Forgetting Sarah Marshall") has apparently committed suicide that morning in the metro. Baker was also pregnant and the scuttlebutt is that it is the married Collins's baby. Collins is an old college buddy of Cal's, and so when he wants to go the investigative journalism route, believing that Collins's pursuit of mega-huge private military vendor PointCorp is somehow involved in all this, he's accused of defending a friend. There hasn't been a really good journalistic investigative thriller in a long while and "State of Play" may, ironically, be its death knell, something the film itself addresses. Della's blogging background finds the eager newbie wanting the quick scoop (she finds a friend of Sonia's working in a karaoke bar with tales of threesomes with the politician) and Cameron Lynne is under pressure from new owners - ironically under the same corporate umbrella as PointCorp - to sell papers. But Cal and his journalistic code demand they uncover the real story, not just the tasty scandals that divert from it. Kevin Macdonald keeps multiple, twisty story strands all moving along at a thriller's pace and the adaptation keeps Cal and his newfound partner Della in harm's way. The writers (and editor Justine Wright, "Touching the Void," "The Last King of Scotland") have done an ace job of taking several seemingly disparate events and whirling them together with centrifugal force and even when you believe you see the story taking shape, the filmmakers have a surprise or two up their sleeves. Hold the presses indeed. The role of Cal was originally cast with Brad Pitt, who walked over creative differences a week before shooting was to commence and although it may not have seemed that way at the time, director Macdonald lucked out. Crowe hasn't been as right for a role as he is for Cal McAffrey since perhaps "The Insider." The actor's naturally shaggy self is spot on, the slightly overweight and rumpled look of a man who lives to dig up the truth yet doesn't take himself all too seriously. Crowe is just tremendously appealing, an Everyman hero with a developmentally arrested personal life. McAdams has the right mix of green and fire as the technologically superior yet street simple protege and Mirren is a perfect choice for an editor stressing over trying to balance journalistic integrity with the bottom line. Affleck, an actor with rumored political aspirations himself, looks like he belongs on Capitol Hill. He makes Collins an impassioned public servant but flawed husband. Robin Wright Penn ("Sorry, Haters," "What Just Happened") is the woman wronged, but there is more depth to the Collins's marital issues than first meets the eye and Penn plays well against both her male costars. In a small role, Jason Bateman, "Hancock," "Smokin' Aces") steals his scenes as partying marketeer Dominic Foy, a guy who has messed around with the wrong people. The reliable Jeff Daniels ("The Squid an the Whale," "The Lookout") plays political two face as Rep. George Fergus and Michael Berresse is chillingly determined as a deep ops hit man. Macdonald hasn't made one of those flashy, razzle-dazzly edited films, but it all looks great. The newspaper office set is a cool configuration of glass walled offices on two floors around a courtyard-like desk pool and yet the colors used make the whole seem dark and cavelike. We see both a familiar and more neighborhood-oriented D.C. in exteriors. Even an underground parking garage has some personality, complements of both the production designer and cinematographer Rodrigo Prieto ("21 Grams," "Brokeback Mountain") "State of Play" is one of those movies they don't make them like anymore and one of the few really worth the multiplex admission price.

This is a tightly wrought conspiracy thriller, by director Kevin Macdonald (“The Last King of Scotland”), which keeps you interested with its machinations of intrigue, conspiracy, a threatening private army and murder. Couple this with the modern day cautionary statement about the death of a newspaper, and what that represents, and you get a complex, intelligent whodunit. Russell Crowe does a deft job in making his Cal McAffrey character a smart, perceptive journalist who believes in the truth of his words. Joining Crowe is Rachel McAdams, giving an enthusiastic performance as rookie journo Della who Cal takes under his wing, as they unravel the twisty plot scripted by Matthew Michael Carnahan, Tony Gilroy and Billy Ray, based on the British TV series written by Paul Abbott. The dynamic duo of Cal and Della are surrounded by a first rate cast of supporting actors with Ben Affleck leading the pack as Congressman Collins. Affleck does a solid job as the honest, grieving public servant with a secret. Helen Mirren is believable as Cal’s tough boss, Cameron Lynne, as is Robin Wright Penn as Collins’s cuckolded wife, Anne. Jason Bateman steals the show when he makes an all too brief appearance as an over the edge news source. Helmer Macdonald shows a deft hand behind the camera as he marshals his cast through the complex story that builds in tension at a pace that complements Cal as he digs down to the core of the mystery over Sonia’s death. Behind the camera techs, including the edgy lensing by Rodrigo Prieto, are first rate. “State of Play” is the kind of thriller that begs to surprise with its twisting turn of events. That is a good thing.