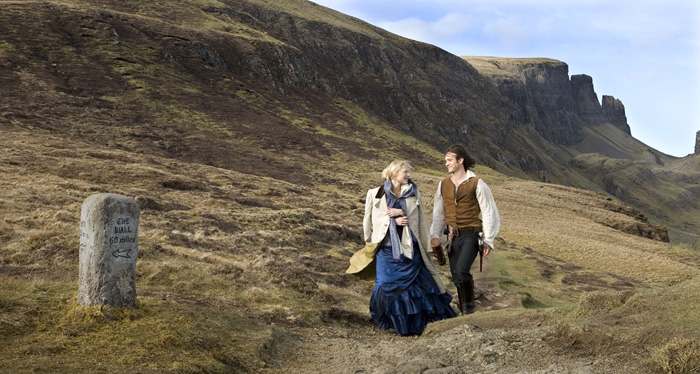 The world was once a place of magic and myth. Young Tristan Thorn (Charlie Cox) is the product of a brief, but beautiful, romance between his father and an enchanted princess held captive by a greedy witch. He is a teen, now, and in love with Victoria (Sienna Miller), a pretty narcissist who is only interested in the attentions of wealthy Humphrey (Henry Cavill). When he sees a shooting star, Tristan vows to her to face any and all dangers to find the meteorite and bring it to his true love in "Stardust."

Based on the Neil Gaiman novel, "Stardust" is a big, sprawling adventure tale that has Tristan on the quest of a lifetime. He leaves the safety of his village, Wall, and journeys across the magical land to find the fallen star. He arrives at the site of the star's landing only to find a beautiful young woman, Yvaine (Claire Danes), at the center of the crater. He does not know it but she is especially magical and the object of more attention than just his. Tristan decides to keep his vow and bring the 'star' to Victoria. Besides Tristan and Yvaine's journey, "Stardust" has a couple of other main stories that revolve around her and the power she contains. The king of Stormhold (Peter O'Toole) is dying. His seven sons, named Primus (Jason Flemyng) through Septimus (Mark Strong), are the candidates for the crown but their subterfuge has reduced their number to just four. That total drops - fast - as the remaining heirs do each other in. Possession of the Yvaine will decide who will be the new king. Then, there are the three witches who want the star to restore their waning power and past beauty. They select Lamia (Michelle Pfeifer) of their number to go after the precious object, entrusting her with the last of their magic. She uses it to restore her beauty (Lamia is even more vain than Victoria) and sets out on her quest the find their fountain of youth. She, like the princes, will stop at nothing to secure her and her sisters' immortality. These three stories converge with a whole lot of special F/X, fantasy adventure and Robert DeNiro in drag. While that last part caused me to have nightmares (and should have been left out of the movie since it is just not funny), Tristan and Yvaine's journey is an action packed, rollicking adventure flick that director Matthew Vaughn ("Layer Cake") and crew seemed to have fun making. It has big cast made up with many celebrity talents, such as Pfeiffer, Danes,O'Toole, DeNiro, Ian McKellen (the narrator), Rupert Everett and Ricky Gervais and a slue of supporting characters. As I said, this is a big, sprawling adventure - so sprawling that it loses its focus at times during its 2+ hours run time. This is a case where some expert editing would have mad it a tighter, more entertaining film. Still, it is a lot of fun and sometimes silly in its rousing action and flashy F/X. It does not have a great deal of soul, just a sense of adventure and a happily-ever-after ending.