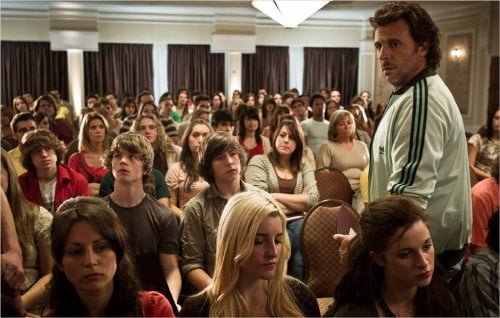 David Wozniak (Patrick Huard) is a 42 years old slacker who still acts like a carefree teenage boy. Two things, though, are about to shake up his world. First, his policewoman girlfriend Valerie (Julie LeBreton) announces that she is pregnant. Then, the sperm bank where he made many deposits some 20 years ago informs him that 142 of the 533 children he fathered demand to know the identity of the donor named “Starbuck.”

David (Patrick Huard, "Les Boys") is the black sheep of the butcher shop owning Wozniak family. The middle son is a lousy delivery truck owner, has a couple of thugs threatening for repayment of an $80K debt and has just found out his cop girlfriend Valérie (Julie LeBreton) is pregnant and wants to raise the baby on her own. But David's biggest problem began twenty years earlier, when he made 693 sperm donations used the name of a prize winning bull who sired 200,000 cows, "Starbuck." Cowriter (with Martin Petit)/director Ken Scott's little French language Canadian comedy has an amusing premise and likable cast, but while it's pleasant enough to watch it never really achieves lift off. With the exception of the musings of David's lawyer friend (Antoine Bertrand), who steals every scene he's in, the comedy is slight and the run time wearying. One wonders just who thought this film would transcend its local market until one learns that it's already being remade by the same filmmaker for American audiences as "The Delivery Man" with Vince Vaughn for a fall 2013 release. David goes to his lawyer when he discovers that despite signed confidentiality agreements, the clinic has disclosed his alias to the 533 children spawned from his sperm. Now 142 of them want to know the identity of their biological father. He's advised to keep the packet of applications closed. Maybe there is a lawsuit here that can resolve David's problems. But David can't resist a peek and when the first randomly chosen page reveals a local soccer star, David is hooked on learning how else his DNA has flowered. His begins to arrange chance meetings with his children with varying results. Julie (Sarah-Jeanne Labrosse, "Eastern Promises") is an addict who begs him to help her stay out of rehab. Étienne (Patrick Martin) is a waiter who loses his job but achieves his dream when David loans him the delivery truck to go to an audition. Montages reveal a tour guide, a drunk, a lifeguard, a severely handicapped young man and a busker who's organizing the group and getting media attention. 'Who is Starbuck?' the newspapers scream. 'He's a pervert" is Valérie's opinion. It's more than a bit of a stretch that the 142 accept David in their midst as the 'adoptive' father of cerebral palsy victim Raphael when he coincidentally already knows so many of them, but David's speech about them having found so many brothers and sisters if not their dad spins the tale in new directions. As one huge family reunites, the Wozniaks grow closer, advising Valérie of the huge heart that allows them to overlook David's lesser assets. Middle-aged Patrick Huard sports the shaggy locks of a man who never grew up and the actor does a fine job creating a frustratingly irresponsible character too sweet and well intentioned to hold a grudge against. In a lovely scene, his hard-working immigrant father (Igor Ovadis) epitomizes a parent's love for a child with warmth and unexpected insight just as vegetarian Goth Antoine (David Michaël), one of the 142, tests David Wozniak when he moves in, then proves hilariously incompetent on the soccer field during a family game. Usually American remakes of foreign language films fail to live up to the original. "Starbuck" is sweet and funny but leaves lots of room for improvement for Ken Scott to tweak his own material.

A story about a guy who unknowingly fathers 533 babies because of his ample and frequent donations (for pay) of his sperm should be rife with slapstick humor. But, this French Canadian satire delves into more serious topics that arise when 142 of his kids insist on meeting him. The result is rather charming story of redemption as David tries to get close to each of them without telling any (but one) that he’s their dad. Actor Huard gives his David a nice arc as his character copes with his incredible new lot in life. David, who is a selfish slacker at the start, grows more and more sympathetic as the film entertainingly wends it way to its upbeat conclusion. While David garners our sympathy, it is his best buddy, Avocat (Antoine Bertrand), who steals the show every time he is on the screen with his laugh out loud voice of reason to David. He is David’s lawyer and is very amused to be his friend’s legal advisor. These scenes represent the expected slapstick and are truly funny moments between good friends. The screenplay, by director Ken Scott and Michael Petit is a true original. I cannot think of another movie plot that comes close to the clever, intelligent script about sperm donation and its possible ramifications.