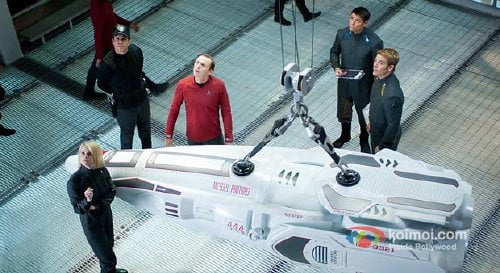 London 2922.55. A Starfleet officer makes the ultimate sacrifice at the behest of another officer with a deadly need for revenge in exchange for his daughter's life and the Starfleet's archives are blown sky high along with many of its men. Meanwhile, Kirk (Chris Pine), just reinstated as his mentor Pike's (Bruce Greenwood) first office after breaking the rules to save Spock is the only one who realizes a high level command meeting is the next target, but not in enough time to save Pike. The terrorist is identified as one John Harrison (Benedict Cumberbatch, "Starter for 10," BBC's 'Sherlock'), a Starfleet captain from 300 years earlier, who has fled to an uninhabited area of Kronos, a Klingon planet, and Commander Marcus ("Robocop" himself, Peter Weller) reinstates Kirk to take the Enterprise and fire the missiles Harrison's outfitted with his cryogenically preserved crew into his hideout, risking war with the Klingons, in "Star Trek: Into Darkness."

Director J.J. Abrams (TV's 'Lost,' "Star Trek"), returning with writers Roberto Orci & Alex Kurtzman ("Star Trek") as well as 'Lost's'Damon Lindelof, secures the franchise reboot with a solid second outing that continues his ingenious strategy of an alternate universe to the original 'Trek's' while also remaining faithful to it. Paramount to the success of this series is the perfection of its regular cast, who have made these iconic roles their own. Even Simon Pegg, who was utilized as a punchline in the first, fully convinces as Scotty this time around. All this and Spock (Zachary Quinto) made action hero makes for an exciting trek. We have the classic themes of Kirk's gut versus Spock's logic, problems with the Enterprise's engine room (compounded by Scotty's resignation and Chekov's (Anton Yelchin) assumption of the role), a beautiful, unexpected additional scientific officer (Alice Eve, "Starter for 10," "The Raven") who may not be what she seems and even a Tribble (watch for other series references and Abrams' in-jokes). Bones (Karl Urban, exceptional) even gets to trot out the 'I'm a doctor, dammit' line. Uhura (Zoe Saldana) confides in her Spockian frustrations with Jim, who ends up dragged into a spat at a very inconvenient moment and Sulu (John Cho) takes the con for the first time. The film's prologue features the well conceived world of a primitive race, neatly wrapped with a "Chariots of the Gods" capper. Scotty's reintroduction to the plot is a nail biter, featuring Kirk hurtling through space. Again. That's part and parcel of this new take's charm - the filmmakers' reshaping of the past to create their own new present.

There is an unstoppable force approaching Earth that could end mankind as we know it. James Tiberius Kirk and loyal crew of the starship Enterprise are ordered to find the fiend who destroyed Starfleet HQ and destroy him. But, a more immediate problem must be dealt with. As they search the galaxy to find the man named John Harrison (Benedict Cumberbatch), they must enter the no-man’s-land of space at the edge of the Klingon Empire and total war is risked in “Star Trek Into Darkness.” Director J.J. Abrams made the reboot of the then-stale Star Trek franchise a major blockbuster event in 2009 with “Star Trek.” Since then, the new franchise’s fans have been mixed over what the sequel would reveal about the beloved crew of the Enterprise. What we get is something old, something new, something borrowed and nothing blue from co-scribes Roberto Orci, Alex Kurtzman and Damon Lindelof. I do not want to go into plot description for “STID.” Millions will have already seen the film and could not give a hoot about what I think, but I am going to have my say, anyway. For me, the 2009 reboot was a well-craft and acted film that introduces the very familiar characters from the series when they were young and carefree. We saw the birth, figuratively speaking, of Jim Kirk, Mr. Spock, Scotty, Bones, Uhura, Sulu and Chekov as they grew from Star Fleet cadets to heroes who save the day. Time was spent reacquainting us with these folks so familiar to all of us. “Into Darkness” has its characters already developed and fleshed out so time is spent on a somewhat confusing script that sets up a new menace for mankind. Abrams and company draw from the rich reserves of the TV series and the decades running film franchise, making many moments decidedly nostalgic. Again, as with the first, the borrowing from the past - tribbles, resurrection, future love interests, the bonds of friendship and…Khan – is done in homage of the TV series and films, not to rip them off. There is a lot going on with the many storylines as Khan (the former John Harrison) makes plans to unfreeze his small army of supermen and take over the galaxy. But, Admiral Marcus of Star Fleet has other clandestine plans of power. The Enterprise and its plucky crew are in the middle of this titanic struggle. And, they have to deal with some very pissed off Klingons who take exception with Kirk and company and their landing on Kronos, on the edge of their empire. The cast that we know and love from the reboot are back in good form, plus there are some newcomer characters, primary of which is the return of Khan. Benedict Cumberbatch is an obvious talent and he creates a superman that does not look like one…but comes across like one. Zachary Quinto embodies his Spock with more depth and emotion than Leonard Nimoy (who appears briefly, of course, as Old Spock) was allowed. The rest imbue the spirit of their original characters and each puts their own personal spin. With a budget at an estimated $185 million, production expectations are high and, for the most part, I was not disappointed. The CGI action is seamlessly combined with the real action to make the film an integration of the two realms. My one real criticism of “STID” is the choice to release the film in an after-production 3D conversion version. J.J. Abrams wanted to (and did) shoot some of the film in IMAX format. The production company, Paramount Pictures, though, insisted that “STID” be converted to 3D. It should not have been so. There is nothing about the 2D that is improved by the conversion and, frequently, the 3D is annoying and distracting. (The saving grace is that the 3D did NOT give me a headache.) The audience, though, should have the choice at the box office: 2D (cheaper tickets) or 3D (expensive tickets). The choice should be theirs, not the choice of the distributor. The set up for future sequels is not done subtly but with an assurance that this puppy is going to be around for a long while.