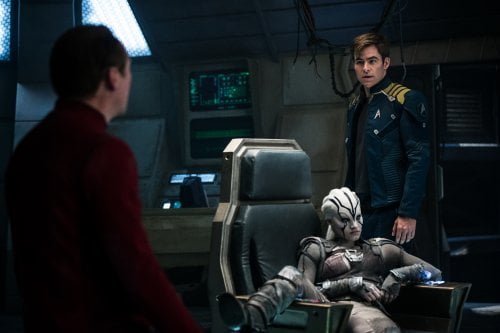 It is time, once again, to go where no man has gone before. This time, the crew of the starship Enterprise is answering a distress call from an uncharted part of the galaxy. When they approach the M-class planet they find not a stranded spaceship but the swarm of warriors led by the bloodthirsty Krall (idris Elba) in “Star Trek Beyond.”

Returning from a five year mission on the USS Enterprise, Captain James T. Kirk (Chris Pine) has applied for a post as a Starfleet Vice Admiral while Commander Spock (Zachary Quinto) is considering moving back Vulcan, but neither has told the other. Their impending conversation is delayed when a distress call is received from Kalara (Lydia Wilson, "About Time"), the commander of an alien science ship. But when the Enterprise responds, it's ambushed by a swarm of alien ships that break it apart, just like its escaped crew finds itself on the hostile planet of Altamid in "Star Trek Beyond." The latest in the rebooted franchise, dedicated to the late Leonard Nimoy and Anton Yelchin (appearing as Chekov for the last time here), is like an oversized episode of the original television series, and that happens to be a good thing. With producer J.J. Abrams handing over helming duties to Justin Lin ("Fast & Furious 6") and a script from Simon Pegg ("Hot Fuzz," "The World's End") & Doug Jung ("Confidence") that emphasizes unity amidst character-derived laughs and eye-popping action, "Star Trey Beyond" is a blast. Having abandoned ship, Kirk finds himself with Chekov, a severely injured Spock with Bones (Karl Urban) while Scotty (Pegg) finds a friend in Jaylah (Sofia Boutella, "Kingsman: The Secret Service"), an alien who's been alone on the planet since Krall (Idris Elba) killed her family. Unfortunately, Lieutenant Uhuru (Zoe Saldana) and Sulu (John Cho), along with the rest of the crew, have landed in Krall's camp and he's determined to kill them all to get what he wants. The unlikely pairings in the face of the gravest danger drive this "Star Trek" into warp speed, most notably Quinto and Urban who lend an underlying affection to their fractiously funny relationship. Boutella breaks out in a big way, her initially hesitant Jayla proving a sexy, kickass addition while thrilling to a communion of engineering with 'Montgomery Scotty.' It is she who leads him to the USS Franklin, the outmoded Starfleet ship she's partially restored (and whose presence on the planet is a mystery with a third act explanation). As the Enterprise crew find each other, they are challenged with both saving the crew in Krall's camp and escaping from the planet and their solutions are alternately fun (an old cargo teleporter), witty (Spock's gift to Uhuru, which he refused to take back), dazzling (Kirk, outfitted in eye goggles and an old motorbike providing 'distraction') and dangerous (Sulu's piloting of a ship not designed for land takeoff). Scotty tells Jayla his grandmother always told him 'you cannae break a stick in a bundle,' a strong message for a divided country from its original diversely cast science fiction series. The film's climax involves an attack on the spaceport Yorktown right out of the "Mission: Impossible" series (which, it should be noted, also stars Pegg). The movie looks great, Krall's swarming mini-ship formations like a starling murmuration, Yorktown a soaring, futuristic Utopia. Alien design is at peak form, Krall's reptilian face accented by tiny points of light, Jayla's ribbed white hair, black on white makeup and startling contacts fiercely sexy. "Star Trek Beyond" is fun and fleet of foot. You may never hear the Beastie Boys' 'Sabotage' the same way again. Grade:

We are in the doldrums of summer and it is hot outside. This is the perfect formula to prompt us to go to the local multiplex, sit in air conditioned comfort and enjoy a summer blockbuster. The good news is” “Star Trek Beyond” fits the bill nicely. All of our favorite characters from the first in the franchise reboot are with us once again, though, sadly, it is the last time we will see Anton Yelchin as Chekov. Goodbye, Anton, we will miss you. All are perfectly comfortable with their characters and roles, making for a lot of comic banter, especially between Spock (Zachary Quinto) and Bones (Karl Urban). I will not bother expanding the synopsis of “Star Trek: Beyond” because, a) if you are a fan you know it already and, 2) everyone else wants to see it for themselves untainted. What I will say is that “Star Trek Beyond” hits the mark and does not show the age signs of a third in a franchise. It is more satisfying than the second in the series, “Star Trek into Darkness (2013)” and holds homage to the original TV series in a loving way. My mind began to wander at about the three quarter mark but, as the big climax began, my attention snapped back. This is a big budget F/X extravaganza (estimated budget of $185 million) and all that money is up on the screen, with the CGI given a run for the money by the large and excellent cast – including newcomer to the franchise, Jaylah (Sophia Boutella), a sexy alien who can kick ass and take names. The actress made such an impression on me that producer J.J. Abrams and company MUST have her join the crew in the next installment. She is a very cool character. So, with the east coast in the throes of a giant heat bubble, this is the perfect time to chill out and be well entertained by some old friends.