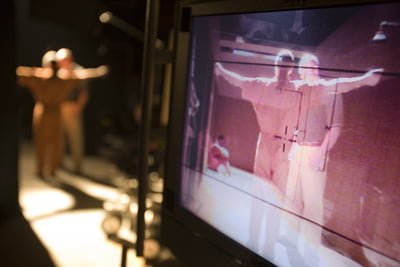 Documentarian Errol Morris takes the infamous photographs of Abu Ghraib and investigates what the startling shots did not tell and if the practices at that prison were, in fact, "Standard Operating Procedure."

Errol Morris has stated that he wanted to take the opposite of his top down approach to his last documentary, the Oscar winning "The Fog of War," by interviewing the men in the field. Counter intuitively, he begins by interviewing Janis Karpinski who held the lofty rank of brigadier general. She is, however, a fall guy just like the 'seven bad apples,' having been stripped of her position as the head of the prison system in Iraq. Karpinski's anger is palpable at those who were too cowardly to essentially fire her in person and whose abuses of power that directly resulted in the Abu Ghraib scandal produced exactly zero intelligence in the hunt for Saddam Hussein. We get the meat of the story, though, from the five field soldiers who became infamous because of those photographs (the remaining two 'bad apples' - apparent ringleader Charles Graner and Ivan Frederick - are still serving stiff prison sentences and were not available to the filmmaker). The most articulate of these is Javal Davis, who describes the horror of arriving at his post, a place fouled with the stench of human waste and rot and a constant target for enemy shelling. Like every other witness, Javal attests to the fact that prisoners were being restrained in stress positions and being subjected to extremely questionable treatment before his arrival - the things documented later by digital cameras were not activities dreamed up by a few bad eggs. Unlike most of the others, though, Javal's moral conflict does not seem newly minted for the film. Sabrina Harman, whose photograph of a 'ghost detainee' killed by the CIA almost landed her in jail, has letters home to wife Kelly to back up her claims of using her camera to have evidence of just what our country was doing, but her presence in that photo - grinning and flashing a thumbs up sign - is disturbing and her explanation weak. Many excuses are made for Lynndie England, the woman seen guiding a naked man with a leash, because of her youth (she was twenty at the time) and infatuation with Graner (thirty-four and the father of her child), but her current protestations feel manufactured, especially when Morris slips in photos of the soldiers horsing around on their own, creating lewd poses for the camera during their down time too. The war may bring out the worst in people but it seems to affect some more easily than others. Megan Ambuhl, the 'other woman' who ended up marrying Graner is matter of fact but appears to carry no guilt. It is of note that Graner cropped her out of the infamous England shots and as a result Ambuhl received no prison sentence (Lynndie just got out). As Javal says, what they did was merely 'softening up' of the prisoners before interrogation - the worst of what happened at Abu Ghraib was never photographed and so therefore, as far as the world and media are concerned, didn't exist. Morris also turns his Interrotron, a device which gives the audience the impression the interview subject is speaking directly to them, on Contract Interrogator Tim Dugan, who discusses why putting new recruits in charge of interrogating senior military officers is doomed to failure and how he got results without using any of the Bush Administration's torture tactics. Photo investigator Brent Pack reconstructs the time line and, most disturbingly, determines which pictures were evidence of crime. While the turning of dogs on a prisoner and the infamous human pyramid shots are deemed criminal, all the stress restraints and panty on head pictures, including the infamous 'Gilligan' who stood, hooded, on a box with wires extending from his fingers, are stamped Standard Operating Procedure. As in "The Fog of War," Morris continues his use of stylized imagery from his opening credits of still photographs suspended in 3-D space to the onscreen diagramming which accompanies Pack's testimony. Investigative recreation, first used in "The Thin Blue Line," is used here to evoke the drowning sensation of water boarding and one soldier's nightmare of a helicopter exploding overhead. Danny Elfman's score often imitates Philip Glass's "Fog of War" music. With "Standard Operating Procedure," Errol Morris set out to demonstrate that the picture doesn't necessarily tell the story, but the evidence shows that in the case of Abu Ghraib, the photographs only told part of the story. The 'bad few,' while unfairly punished, were still culpable and Morris says as much. It is a sickening document of what a country founded on principles of liberty, freedom and justice for all now perpetrates.