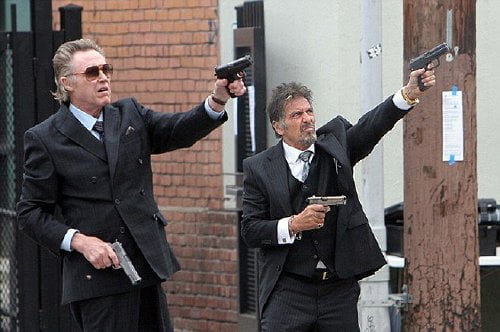 Val (Al Pacino) is getting out of prison after serving 28 years for killing a mob boss’s son. His old friend and partner, Doc (Christopher Walken), meets him at the gate, but Val does not know that his friend has a hidden agenda in “Stand Up Guys.”

After a long stint in prison keeping his mouth shut, Valentine-call-me-Val (Al Pacino) is released to find his old pal Doc (Christopher Walken) there waiting for him. As Val has no money, no place to stay and a desire to live it up a little, Doc takes him back to his apartment where he clues us, but not Val, into a hidden agenda. But Val confronts his buddy over a meal and Doc admits that yes, their old boss Claphands (Mark Margolis, "Pi," "Gone Baby Gone") has tasked him with taking out his friend, but they have a whole evening stretched out before them as "Stand Up Guys." First time screenwriter Noah Haidle has few new ideas and director Fisher Stevens, who has worked behind the camera more with documentaries like "Crazy Love" and "The Cove," doesn't do much to goose up the action or give it much visual interest. Considering the cast there are moments to be sure (Pacino's one note performance doesn't offer any of them), and the film is a real calling card for young Addison Timlin ("Afterschool," SHOtime's 'Californication'), luminous as Doc's waitress granddaughter Alex, but for most of its running time, "Stand Up Guys" is positively enervating. Back in 1979, the trio of criminally minded senior citizen concept was done with grit and heart in "Going in Style," but Haidle ladles out one cliche after another. There's the hit man who has to make a hit on a friend. There's the old age last hurrah and the attendant cutesiness of watching older people do younger people things, like engage in sex with hookers and beat on thugs younger than themselves. In a sequence ripped right out of "RED," two go to spring their third partner in crime (Alan Arkin's Hirsch) from a nursing home. When Haidle does do something new, like the burial of one of the trio which follows an expected death, it's so ridiculous we're pulled out of the film (a licensed nurse (Julianna Margulies, TV's 'The Good Wife,' in a misconceived role) would go along with the illegal internment of her father, leaving work in an E.R. in the middle of the night to do so?). There are a couple of amusing running gags involving Viagra, chewing gum and voracious appetites. Of the three stars, Walken's understated reactions provide the most pleasure. Pacino acts like an over wound mechanical toy with repetitive intensity. Arkin has too little to do. Lucy Punch ("You Will Meet a Tall Dark Stranger") brings some appealing quirk to a very unlikely sort of 2nd generation brothel keeper. The film's look is exceptionally dingy. Action takes place on deserted streets populated by warehouses and the occasional convenience or menswear store as the script demands. Songs provided by Jon Bon Jovi aren't enough to elevate the production. The film does, at least, go out on a good note, Timlin investing the sentiment, Walken and Pacino a titular reminder.

Fisher Stevens directs the first-timer feature by scribe Noah Haidle and has top notch actors to work with. Unfortunately, the talent overshadows the story about a guy facing the revenge of the mobster father – after serving nearly three decades in prison for the murder of his son. (Let it go gangster Claphand (Mark Margolis)). The irony is that Doc is the one who must perform the hit on Val. This contrivance leads to the aged hijinks of two old friends as Val wants to get some at the local brothel. Overdosing with “boner pills” soon follows and Doc is conflicted over his mission to commit mayhem on his old friend and partner. Al Pacino chews scenery as randy ex-con Val as he dives into the world of booze, drugs and women that he has been deprived of for so long. The more sober Doc is given the proper role of the voice of reason (and angel of death) and Walken gives his melancholy character gravitas. The muddled buddy film also brings in Hirsch (Alan Arkin), the gang’s driver from the old days. Third billed (undoubtedly because of his recent Oscar nom), Arkin’s character is barely on screen long enough to make an impression, but the actor, as always, is a likable presence, even if too briefly. The elder mobster are surrounded by young and attractive women – Julianna Marguiles, Judy Punch, Addison Timlin, Vanessa Ferlito, Katheryn Winnick – who all have some kind of tie to the old trio. Direction is as flat as the story and the main characters feel more like caricatures with Pacino paying homage, sort of but only to get a chuckle, to his “Scent of a Woman’s” familiar “Woo ha!” The side stories involving the women are given little shift and include losing a parent and gaining a grandfather. The forced humor, manufactured angst – like a 28-year old vendetta – and retread dialog like “(Val) We’re going to kick ass or chew gum,” “(Doc) And I’m all out of gum” - make “Stand Up Guys” a disappointment and a waste of some great talent.