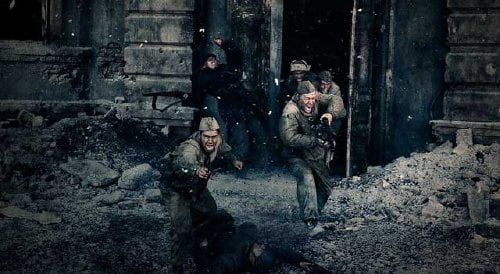 In August of 1942, Hitler’s Wehrmacht launched a massive attack on the Soviet city of Stalingrad. By November, though, the attack had stagnated and the Red Army was fighting back with an unimaginable fierceness. A handful of Russian soldiers are sent into the thick of battle to occupy and hold a strategically located building where a young woman doggedly refused to leave despite the carnage of “Stalingrad.”

In November, 1942, starving citizens were facing not only the upcoming, brutal winter but the German occupation of their devastated city. An outnumbered, battered division of Russian soldiers is crossing the river, however, determined to take back "Stalingrad." Director Fedor Bondarchuk delivers plenty of 3D IMAX spectacle in Russia's highest grossing movie, submitted to the Academy for 2014's Best Foreign Language Film, but it's weighted towards the film's beginning and end. Much like "Saving Private Ryan" with its current day bookending device, it opens with a wallop of fiery, suicidal determination as men young and old scramble up a hill towards entrenched Germans, many ablaze from the detonation of fuel tanks. But once the film settles in, establishing the band of five men linked back to our present day narrator, it becomes indulgent in its Mother Russia symbolism, verging on the sentimental. What begins as a hellish depiction of war begins to turn into "3 Godfathers." Oddly, the first words we hear are Japanese as international aid arrives after the 2011 Tohoku earthquake and tsunami. Our narrator, whose face we never see, is a Russian specialist brought to a site where five young Germans are trapped in a small space beneath a collapsed building. To calm the young woman speaking for the group beneath the rubble, he begins to tell her the story of his five fathers. 'The Russians are coming,' advises Wehrmacht Captain Kahn (Thomas Krechmann, 1993's "Stalingrad," "Downfall") over the radio from his lookout point, which houses the detonator Russian Captain Gromov (Pyotr Fyodorov) and his men are attempting to get to. Gromov makes it, but Kahn overpowers him, leaving him for dead, and sets off wave after wave of fireballs. More Russians than would seem possible manage to swarm the unbelieving Germans at the top of the hill, many of whom perish in the Russians' firey embraces. Credit writers Sergey Snezhkin and Ilya Tilkin for establishing many personal encounters between these enemies which will not only provide a face to each's foe, but sets up the eventual climatic showdown between Kahn and Gromov. Gromov and his men - crude sniper Chvanov (Dmitriy Lysenkov), taciturn Nikiforov (Aleksey Barabash, "Russian Ark"), middle-aged Polyakov (Andrey Smolyakov) and the baby-faced Sergey Astakhov (Sergey Bondarchuk) - take control of a bombed out apartment building on the The Children's Circle Dance Fountain square, Polyakov killing a German threatening what they believe to be a young boy. This turns out to be Katya (Mariya Smolnikova), the narrator's mother, then eighteen, who has refused to leave the home where her entire family perished. And it is Katya that is the root of "Stalingrad's" problem. At first we're left to wonder if the young waif, all brown puppy dog eyes and tentative pout, may not be all there, but after some initial pushback from Gromov, the men all begin to fall in love with their mascot, culminating in a wartime birthday celebration which is equal parts touching (the revelation of Nikiforov's past as a celebrated singer) and ridiculous (a chocolate cake in a place where dirt is sifted for grain?). In a parallel thread, we see Kahn lose all semblance of a military officer as he falls for Russian beauty Masha (Yanina Studilina), the spitting image of his dead wife. As Katya learns to fight, Masha becomes reviled as the whore of a German, no matter her unwillingness. In one scene, Kahn looks into Masha's mirror after raping her. 'I came here as a man, you turned me into a beast,' he says, large-scale slaughter apparently forgotten. This focus on these two pictures of Russian women and their treatment in different camps is meant to develop the film's characters, but in reality they detract from the battle at hand. The entire midsection is given over to these stories, with Katya's protection and an ultimatum delivered by Kahn's commanding officer (Heiner Lauterbach, "The Experiment") after he discovers him with Masha, driving the climax. The one major skirmish before the film's finale is also driven by the fate of a woman, a civilian accused of being Jewish, whose horrible demise is allowed to play out before Gromov's men risk all to attack. By the time Kahn makes it personal, enlisting German tanks to strike Gromov's building, a few of the actors have invested us in their fates, namely Fyodorov's 'professional' hero and Smolyakov's wistful widower, but the film's biggest name, Krechmann, has been saddled with an impossible character, the sympathetic rapist. (It is ironic that Krechmann got his start on a German take on this bloodiest of battles, the far superior 1993 "Stalingrad.") "Stalingrad" is a spectacle on the IMAX screen, its 3D lensing immersive (although its desaturated color seems dated, a holdover from the early aughts), its stunts envelope pushing (fourteen stuntman were set ablaze for that rush from the Volga). CGI, when it is used (the crash of a Henkel bomber), is mostly seamless, a "Matrix" shot following a mortar shell excepted. Astakhov's claim that he can shoot around corners is proven with technical flair. But much like "Gravity," incredible visuals are served by a story too intent on pushing its symbolism. Bondarchuk leaves Katya in an almost magical, fairy-tale aerie too abruptly, pulling back to the present where we can reflect on the irony of her son, alive because of five hellbent Russians, departing having saved the lives of five Germans. Only the woman gets to give thanks.

This is an ambitious effort by helmer Fedor Bondarchuk and it works brilliantly – some of the time. The bookending device for “Stalingrad” is the aftermath of the tsunami and earthquake that devastated Japan in 2011. Rescue workers find five survivors, all young Germans, trapped beneath the rubble. A volunteer doctor who speaks German communicates with them and, to keep those trapped calm, he begins to tell them his story: “I had five fathers….” The action then shifts to Russian soldiers crossing the Volga River to attack the entrenched German forces that command most of the city of Stalingrad. The camera focuses on one team of scouts in particular whose mission is to attack and take over the German headquarters housed in the tactically located building. This building will be the center of the pivotal battle as each side tries to force the other out. Cloaked within this story of war and death at its worst is a love story of sorts between the “five fathers” and the girl, Katya (Mariya Smolnikova). When the Russians, under the command of Kapitan Gromov (Pyotr Fyodorov), accomplish their mission, leaving a lot of dead Germans, they find Katya, who refused to leave her home. This is the heart of “Stalingrad” as the men take the young woman under their protective wings and she becomes a mascot to the men, with each falling in love with her in their own way. The men comprise a cross section of Russian society with an older soldier, called Angel, a young sniper, a gunner, a Navy warrant officer, a former (before the German invasion) famous opera singer and the captain. All have compassion and humanity, except toward the Nazis. The story, punctuated with gut-wrenching battles and violent hand-to-hand combat, is sympathetic toward the Russian characters as they must hold their ground as ordered against overwhelming odds - with Katya’s safety always foremost in their minds. It is the punctuations, though, that are most striking in “Stalingrad”, with the most brutal depictions of the horrors of war masterfully done. The filmmakers use CGI, as one expects in the new millennium, but also copious use of live action stunt work. The story, by Ilya Tilkin and Sergey Snezhkin, leans strongly on the Russian POV but also tries to, unevenly, give shrift to the Germans in the guise of Kapitan Kahn (Thomas Kretschmann), a German officer who has seen too much of war and its savagery. He is assigned the task to take back the building as part of a move for the Germans to cross the Volga and attack the Soviets and, in Hitler’s mind, win the war. Kahn is involved in a complicated relationship with a beautiful Russian woman, Masha (Yanina Studilina), whom he has taken under his own wing. Studilina is a stunning beauty and her Masha is a vulnerable, sympathetic character. Kretschmann’s Kahn is a man of confused allegiances – to the Fatherland or to Masha? As said above, both live action and CGI are used to depict the raw violence of war. The melding of these two art forms is seamless and places the viewer in the midst of battle. One scene, with burning Russians attacking the German defenses, needs to be seen to be believed. Production is also handled with a deft hand , especially the recreation of German Panzer and Tiger tanks, Russian T-34s and a crashed Junkers 88 bomber. Costumes, military props, like the famous Russian Papashaw (PPSH) submachine gun, are all accurately rendered. The conventional “Three Godfathers” story - Laura came up with that analogy – does not have the same impact as the 1993 German version of the battle, also called “Stalingrad.” The technical skill in make the battle scenes so convincing, for me, is the real draw to see the new “Stalingrad.”