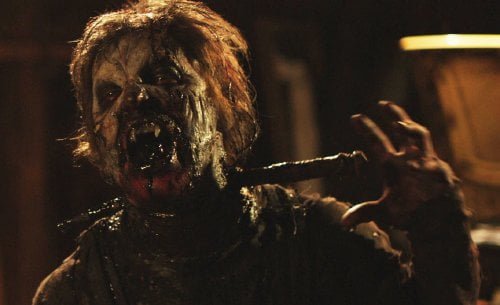 Teenaged Martin (Connor Paolo, TV's 'Gossip Girl') is preparing to hit the road with his parents when they are both suddenly taken down by the creatures they were fleeing. Martin, outside retrieving the family dog, is saved by Mister (Nick Damici, "World Trade Center"), a gruff vampire killer who's willing to show the boy the ropes as they attempt to make their way out of "Stake Land."

Cowriter(with star Nick Damici)/editor/director Jim Mickle takes all the usual elements of vampire and zombie tales and makes them seem fresh with solid characterizations and a real sense of regional American filmmaking. "Stake Land" has elements of "Zombieland," with its pseudo father/son road trip, but its tone is pitched closer to "The Road," where desperate times make for new kinds of monsters. In fact, along with Kevin Smith's upcoming "Red State," Christian right extremists could be the genre's newest fiends. Once again we're dropped into a vision of post-apocalyptic America where regional farmhouses cant and contain suicides or worse and where abandoned, rusting vehicles litter the roadsides. The country is infested with 'vamps,' here a type of crossbreed between vampires and fast moving zombies. There are heavily guarded pockets of civilization, called 'lockdowns,' and tales of New Eden, northern territory free of the plague. When Martin loses his family and gains Mister they are in the South and no sooner have they taken to the road when they save a nun, only known as Sister (Kelly McGillis, "Top Gun," very affecting), from two burlap wrapped rapists, whom Mister dispatches with his vamp stakes. Sister gives us the part of the story where a character must deal with the horror of seeing a former loved one, in this case Sister Agitha, brutally slain and make no mistake, the vamps in "Stake Land" are not easily killed. Mister explains that 'Beserkers,' the oldest, must be staked at the base of the brain. The three form a type of family moving forward, but when they investigate a settlement called 'The Word,' they come across Jebedia Loven (Michael Cerveris, TV's 'Fringe'), the leader of a Christian cult who believes the vampires were sent by God to dispatch sinners and that women are little more than brood mares. He also happens to be the father of one of those rapists and Mister's exploits have become well known. Martin's new family continues to shift as people are lost, sometimes found and join him and Mister, the constant, on their travel north. This is also a coming of age tale where the taciturn Mister provides fathering as survival. Yet Mickle and his actors work emotional subtext into the relationship subtly, like Martin's observations of Mister's one night stands and Mister's watchful eye as Martin meets new people, like Belle (Danielle Harris, "Hatchet II"), a young pregnant woman also headed north. Lessons in humanity are taught by characters is small roles along the way as Mickle juxtaposes scenes of horrific violence with quieter moments. There is an extended hush as the group heads through northern forests on foot before they are dealt a surprising card, a deadly, stealthy nemesis. Connor Paolo is an attractive lead who invests Martin (a tip of the hat to Romero's 1977 film?) with an innocent decency and gallantry toward women, the older as shadows of his lost mother. This kid has a career ahead of him. Damici is great as the gruff hero who takes on huge odds and seems to give little truck to sentiment when survival's at stake, until he lets his soft side sotto voce. An almost unrecognizable McGillis is strong as the nun who must adapt quickly to a world gone mad and Harris offers an innate sweetness. Cerveris is a bit of a stock, over the top villain. The cast also features Sean Nelson ("The Taking of Pelham 1 2 3") as the obligatory African American ex-military guy, Bonnie Dennison (TV's 'Guiding Light') as a lone trading post survivor who's a bit too upbeat and Glasseye Pix producer Larry Fessenden ("The Last Winter") as a helpful bartender. As Scamp, a young vampiress, Eilis Cahill makes a big impression with little screen time. The film is beautifully shot in widescreen by Ryan Samul. Original Music by Jeff Grace ("Meek's Cutoff") borders, but doesn't quite cross, on the too pretty, with increasingly mournful piano and violins. Mickle's gotten good performances from a large ensemble within a nicely staged production and almost covers up the few spots in his script where we're asked to take big leaps of faith.