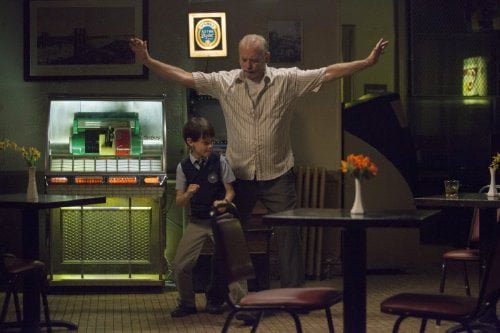 After setting up an installment plan with his pregnant Russian hooker Daka (Naomi Watts), Vincent (Bill Murray) goes to his bank where his teller (Greta Lee, HBO's 'Girls') informs him he's overdrawn by $112.14. So when single mother Maggie's (Melissa McCarthy) moving van hits a tree in front of his house that fells a tree branch onto his ancient LeBaron, the old curmudgeon sees a financial opportunity. Maggie's new job requires long hours which leave her young son Oliver (Jaeden Lieberher in his debut) unattended, so her sketchy neighbor goes for babysitting cash as well. But although the old guy takes Oliver to bars, strip clubs and the race track, Oliver sees something few others do in the man he comes to think of as "St. Vincent."

For his feature debut, writer/director Theodore Melfi has crafted a showcase for star Bill Murray, based on an idea taken from his own experience. But aside from the Catholic school assignment given by Brother Geraghty (Chris O'Dowd, irreverently amusing) that leads to Melfi's sentimental ending, we've seen all this before ("Bad Santa" being but one example). Still, Murray is Murray and watching his sweetness peek through his curmudgeonly crust is worth the price of admission. More surprising is Naomi Watts, who excels in her comedic role as the no-nonsense 'woman of the night,' her good heart masked by her blunt Russian survival instincts. At first, Vincent's not too thrilled to be caring for a 10 year-old, but we can already see there's more to him by the white Persian cat which nests on his lap and he thinks to ask the kid if he's hungry, serving up 'sushi' (canned sardines on Saltines). Melfi wisely teases out the underlying reason for Vincent's financial desperation, first offering up Zucko (Terrence Howard) as his somewhat understanding bookie. While Oliver gets an education on gambling (the youngster's lucky, hitting a Belmont Park Trifecta which Vincent splits, opening a bank account for the kid), his first real exposure to Vincent's inner goodness comes as he's challenged yet again by school bully Ocinski (Dario Barosso, "Robot & Frank") just as his neighbor saunters by. But it's a trip to a more upscale niche of Brooklyn that tells the real story. Murray could do this role in his sleep but that doesn't mean he doesn't bring his comedic charm and heart to it. Forced to withdraw Oliver's money, Murray's face speaks volumes of shame and regret. Lieberher's quiet seriousness is a great foil to Murray's madness (the vet was so impressed by his young costar, he signed on to the kid's next film by Cameron Crowe). Also good is Kimberly Quinn (TV's 'Twisted') as kind-hearted Nurse Ana, countered by Ann Dowd's ("Compliance," HBO's 'The Leftovers') businesslike administrator. McCarthy's OK here, but we've seen the down and out worrier from her before and she brings nothing new to this character. In a small role, Donna Mitchell lends an air of poignant beauty. The production takes advantage of working class Brooklyn neighborhoods (the neighbors reside in Sheepshead Bay), the interior of Vincent's home looking like it hasn't been touched since the 1970's. "St. Vincent" is a sweet buddy movie with some wonderful supporting players, but it's its Murrayness that gives it distinction. He's become America's eccentric comic laureate. Grade: