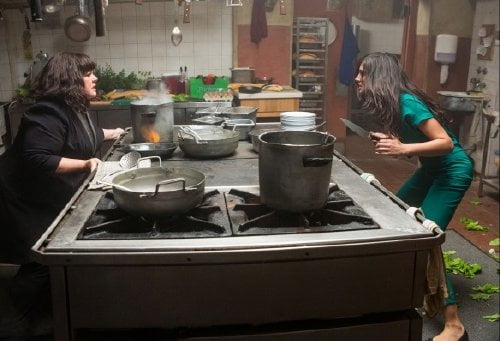 With a terrorist threat to NYC looming, the CIA loses the agent, Bradley Fine (Jude Law), investigating the arms dealer with a nuke at her disposal. Devastated by his death, his 'earpiece,' desk bound CIA analyst Susan Cooper (Melissa McCarthy) volunteers and surprises everyone when it turns out she has the real makings of a "Spy."

Writer/director Paul Feig has had the most success showcasing Melissa McCarthy's brand of comedy and their third collaboration is their best yet. While I hated "Bridesmaids" it was obviously a huge hit, as was "The Heat," a movie I enjoyed quite a bit more. But McCarthy was one of an ensemble in the first and co-starred with Sandra Bullock in the second. She's surrounded by a beefy supporting cast in "Spy," but McCarthy is clearly the lead with, should she choose to accept it, a potential franchise on her hands (I'm betting "Spy 2" is announced within a few weeks if not sooner). Opening with a Bondian theme song and credits, Feig dives in with Susan guiding a tuxedo wearing Fine through a labyrinthian maze beneath the Bulgarian manse where Tihomir Boyanov is throwing a swank party. Susan's the eyes in the back of Fine's head as he shoots, kicks and flips his way towards Boyanov's inner sanctum. With the man in his sites, Fine sneezes, inadvertently shooting the man in the head. Susan takes the blame for having forgotten to tell him she'd slipped allergy pills into his pocket. Susan, part Chloe to Jack Bauer, part Miss Moneypenny to James Bond, would do anything for her man, so when he takes her to a fancy restaurant and slides a jewelry box across the table, she's deflated to discover an ugly funny cupcake necklace Fine thinks fits her personality. When Fine tracks the nuclear device to Boyanov's haughty daughter Rayna (Rose Byrne, "Annie"), Susan ends up face to face with the muzzle of her gun via his camera. Determined to avenge his death and with the C.I.A.'s field team all outed, the insecure analyst volunteers herself for the field. Deputy Director Elaine Crocker (Allison Janney) pairs her with colleague Nancy (Miranda Hart, British TV's 'Call the Midwife') as her own 'earpiece,' sends her to Patrick (Michael McDonald, "The Heat") for some embarrassingly camouflaged weapons, gives her the alias of Carol Jenkins, a dowdy Midwestern single mother of four, and orders that she will only 'observe and report.' Macho agent Rick Ford (Jason Statham), whose extraordinary feats are legendary in his own mind, quits in protest, setting out to complete the mission on his own, immediately endangering Susan's cover. The nervous Nelly who arrives in Paris comes into her own when she spies Ford's backpack being swapped without his knowledge, not only averting his death, but killing a rival in the process. Her cover switched to Penny Morgan, an Iowa cat lady, she arrives in Rome to be overlooked by all Italian men but her oddly smitten driver Aldo (Peter Serafinowicz, "Couples Retreat"). Taking matters into her own hands, Susan recreates herself as Amber Valentine, arriving at Casino di Roma all glammed out on the heels of Boyanov crony Sergio De Luca (Bobby Cannavale, "Annie"), but in a weird twist ends up in Boyanov's private jet heading to Budapest (which also stands in for Paris and Rome). Rayna, who is both repelled and intrigued by the woman who reminds her of a sad Bulgarian clown, roofies Susan only to be saved by her a second time when 'Amber' pilots her out of control jet to safety. With some quick thinking and another change of wardrobe, Susan reinvents herself yet again as the secret bodyguard hired by Rayna's father to protect her. McCarthy's constantly changing identities and parallel growth in confidence are mined for great comedy, but the film's secret weapon is Statham, whose inept braggadocio keeps raising the stakes for Susan. Statham wisely plays it straight. Also fine is Law, whose preening Fine is a great Bond sendup. Law throws subtle hints that his feelings for Susan just might be more in sync with her own than she thinks. Byrne, in a wig that would challenge Marie Antoinette's and clothes compared by Susan to that of a 'slutty dolphin trainer,' is a skilled comedienne, her constant imaginative putdowns delivered with such a downturned face one cannot help but laugh. "Spy" is surprisingly violent for this sort of thing and McCarthy's called upon to deliver like an action star, chasing terrorists on foot, scooter and hanging from a helicopter. A kitchen fight with an assassin (Nargis Fakhri) is comedically choreographed, cooking utensils and dinner ingredients becoming lethal. The comedy isn't always on point, though, with the firing of a gardener, rodent infestations and 50 Cent floating about unmoored. Grade: