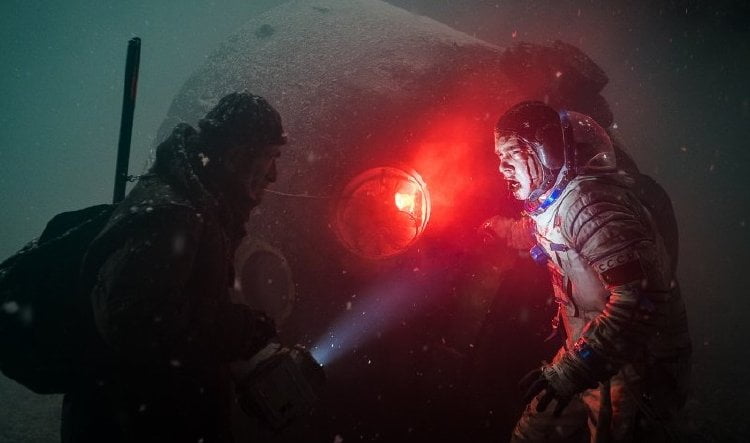 It is 1983 and Russia is ready to celebrate the returning cosmonauts of their Orbit-4 spacecraft.  But the mission landing is shrouded in secrecy when one crew member is found dead, another in a coma, horribly mutilated and its commander, Konstantin Veshnyakov (Pyotr Fyodorov, 2013's "Stalingrad"), with no memory of what happened.  Psychologist Tatiana Klimova (Oksana Akinshina, "Lilya 4-Ever") is brought to the Research Institute of Moscow by Comrade Semiradov (Fedor Bondarchuk, director of 2013's "Stalingrad") to work with Konstantin who, she discovers, has returned with an alien companion, a "Sputnik."

Director Egor Abramenko’s (written by Oleg Malovichko and Andrei Zolotarev) feature debut is being described as a Russian spin on “Alien,” but while it also features an alien parasite that can exist outside the human body (in Russian, Sputnik means both satellite and companion), this film has a lot of other things on its mind.  For example, when Tatiana is brought on board, Semiradov smiles at her comment about being willing to ‘keep secrets from the Russian people.’  He will test her convictions.  The film also delves into just what defines a hero.  “Alien” is surely an influence, but this is no mere copycat.

A creepy opening scene is the only one featured in space as the cosmonauts listen to what sounds like something running about the exterior of their capsule as they make their descent to Earth, Oleg Karpachev’s deep, heavy score foreboding doom.

Inside the Institute, Tatiana shows great compassion towards her patient, who asks her to call his mother.  He’s observed through a glass wall where he paces.  And then one day, he doubles over, vomiting up his unwanted hitchhiker in front of horrified onlookers.  Tatiana demands entry, attempting to communicate.  The creature, which resembles a slithering snake with clawed forearms and a wing like crest on its head, screams and lets out a kick at her, more defensive action than attack.  Konstantin appears in a suspended state until the creature returns to its host, which it apparently energizes.

Production Designer Maria Slavina is blessed with a pristine 1959 Russian building, the functioning Institute of Biochemistry of the Russian Academy of Sciences, for her main set.  She really impresses with her command of color, utilizing a range from mint green to not-quite-teal in her institutional setting.  The CGI Sputnik is imaginatively icky, something we haven’t seen before.  Abramenko also elicits some creep factor from a child, Lyosha, in his third act.  His direction, encompassing quiet conversational, horror and action scenes, is taut throughout and while the screenwriters bring us to an expected destination, the route they take isn’t a well worn one.  “Sputnik” is both an assured filmmaking debut and a real treat of a genre movie.