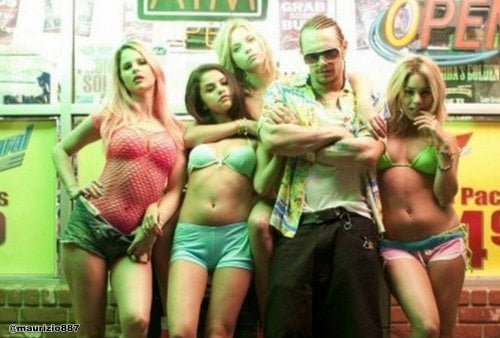 Christian college student Faith (Selena Gomez, Disney's ' Wizards of Waverly Place') is upset that she and her friends don't have enough money to head south and blow off some steam, but she's warned that the girls she intends to travel with are wild. Sure enough, Brit (Ashley Benson, TV's 'Pretty Little Liars'), Candy (Vanessa Hudgens, the "High School Musical" movies) and Cotty (the filmmaker's wife, Rachel Korine, "Mister Lonely," "Septien") solve their financial problem by robbing the local Chicken Shack with a water pistol and stolen car and the foursome head to St. Pete and become "Spring Breakers."

Writer/director Harmony Korine's ("Gummo," "Mister Lonely") tale of teenaged debauchery seems more sprung from the nihilistic mind of fellow low budget filmmaker Greg Araki until we remember Korine's first gig was writing Larry Clark's "Kids." This movie about four girls who cross paths with criminal rapper Alien (James Franco, far from "Oz") was clearly shot on the fly amidst the real thing, with its teenaged stars shedding their squeaky clean images as everyone around them acts like they're in a 'Girls Gone Wild' video. Cinematographer Benoît Debie ("Enter the Void," "Get the Gringo") grabs great images, full of color-coordinated Vespas and glo-in-the-dark bikinis and editor Douglas Crise ("Babel," "Arbitrage") puts them together in an impressively impressionistic, circular style, but after a while repetition sets in, the images recycled one time too many. Korine's gotten perfectly natural performances from Disney girls in very unfamiliar surroundings, but the film's greatest acting asset is James Franco, going for broke in his own "Killer Joe" role. We first spot Alien when he first spies his future posse from the stage of an MTV-style beach concert and he becomes an unlikely savior when the girls are arrested in a drug-drenched hotel room (this just after Faith's call to her grandmother describing the most wonderful place she's ever been with lots of wonderful warm people). Faith's already rattled, but when Alien, sporting corn rows, tats and a silver grill, brings them to a local pool hall where they comprise the white clientele, she knows she wants to go home and Alien's soothing words have no effect. She's on her way home as the three blonds are introduced to his armed-to-the-teeth beach house. Alien jumps around with glee proclaiming 'Look at my sh*t!' before performing a Brittany Spears song on an outdoor white baby grand as his babes dance about in pink ski masks adorned with unicorns. But Alien's challenged by the man he claims is his best friend and when Big Archie (rapper Gucci Mane) fires into their car shooting Cotty in the arm she's the next to depart. The remaining trio boat to Archie's dock for a violent showdown. Korine revels in T&A, debauchery, violence and Franco's hilarious performance, but while "Spring Breakers" is often funny and surreally striking, all we're left is an ironic message about college educations and sowing one's wild oats. One could try and look deeper to mine a statement about a lack of compassion in today's frequently entitled youth. Music is by former Red Hot Chili Pepper Cliff Martinez and Skrillex. 'Glee's' Brittany, Heather Morris, has an insignificant role in early goings and rappers the ATL twins play a (hopefully twisted) version of themselves.