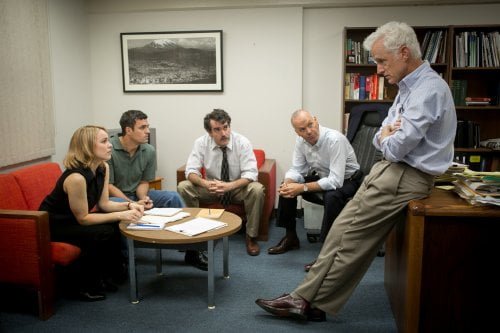 In 2002, the Boston Globe’s investigative team uncovered a sexual abuse scandal, and subsequent cover-up, involving five priests in the Boston Catholic Archdiocese. But, what started as isolated incidents in the investigation, soon proved to be far more widespread and the American Catholic Church defended those whose crimes were brought to light by the news team called “Spotlight.”

With its large population of Irish and Italian immigrants, the city of Boston had strong ties to the Catholic Church. But there was a long standing scandal brewing, one which an intricate pattern of collusion had kept out of the public eye. Even though the Boston Globe had reported on the sexual abuse case against Father John Geoghan, the paper hadn't dug deeper. When new editor Marty Baron (Liev Schreiber) arrived from the Washington Post, he smelled a story, and directed the paper's long term investigative team to find evidence of a systemic coverup. In 2002, the paper dropped a bomb that continues to reverberate around the globe, written by the three men and one woman who staffed "Spotlight." The newspaper movie has had a rich tradition in American film with "All the President's Men" the standard bearer in illustrating the power of the press. Cowriter (with Josh Singer, "The Fifth Estate")/director Tom McCarthy's ("Win Win") film doesn't have the cinematic sweeping grandeur of Pakula's 1976 film, instead focusing on the day to day doggedness required to uncover heavily shrouded secrets and how easily a community, including its reporters, can miss evidence right out in the open. This scandal, of course, had the added element of shame, many victims happier to keep the sins against them quiet, and that shame is reflected back as guilt when the Spotlight team becomes aware of the powder keg they've been sitting on, much of the evidence literally sitting in the Globe's own archives. The filmmakers begin with a 70's set prologue illustrating the velvet gloves used when a priest is accused, the Boston Police Department reluctant to put a man of the cloth in cuffs. Jumping to the 21st century, the usual workplace tension is in place when Baron arrives, assistant managing editor Ben Bradlee Jr. ('Madmen's' John Slattery), who many presumed would acquire Baron's post, prickling at Baron's suggestion that there might be more to the story of the degenerate priest. Spotlight editor Walter 'Robby' Robinson (Michael Keaton) acquiesces to Baron's restrained yet persistent 'suggestion,' putting aside his team's current BPD story and tapping his friendship with Jim Sullivan (Jamey Sheridan), a Church lawyer who is the first to advise him to stop looking. Mike Rezendes (Mark Ruffalo) begins by going after Geoghan's victims' lawyer, Mitchell Garabedian (Stanley Tucci), harried and unhelpful at first, as well as Eric Macleish (Billy Crudup), a victim lawyer/arbitrator who uses avoidance tactics. Sacha Pfeiffer (Rachel McAdams) tries to contact the victims themselves, making a connection with SNAP founder Phil Saviano (Neal Huff, "The Grand Budapest Hotel"), frustrated that he send them 'a big box of information' five years prior. Matt Carroll (Brian d'Arcy James, "Time Out of Mind") goes data mining, discovering to his horror that one of the Church's rehabilitation houses for wayward clergy is around the corner from his home's young children. The Jewish Baron pays a visit to Cardinal Bernard Law (Len Cariou, "Prisoners"), who ironically relates his own past editing a Southern Catholic paper as a 'meddling outsider,' before suggesting that they 'work together.' Throughout we see these four hide their own horror as tales are recounted or covered. The one priest turns into eighteen until a former priest treatment psychiatrist tells them predatory pedophilia is a 'recognizable phenomenon' in 6% of the priesthood - if true they're looking at 90 priests in the City of Boston alone. Sacha discovers a letter from a mother looking for answers from the Church she supported with silence as six of her children were victimized. Later, she knocks on an accused priest's door and he's childishly happy to recount his history, at least until his sister angrily drags him back inside. She's so sickened, she stops taking her grandmother to church. McCarthy keeps us in the cubicles and basements of the Globe with the occasional foray into grander milieu like Law's ostentatious abode or a Catholic charity ball, the Church's wealth a visual symbol of its power. The reporters also spend a lot of time on Boston neighborhood streets, law offices and court houses. The screenplay is a game of connect-the-dots, as the scope of the cover up continues to expand and offer surprises - when threatened by Rezendes to become an article subject himself, Macleish, who brokered victim settlements under the table, snaps that he'd sent a list of twenty names to the Globe. Robby has a rude awakening visiting his alma mater, the Catholic Boston College. Catholic parish records are reverse engineered by Carroll, who discovers decades of pedophile priests being moved throughout the area, recognizable by intermittent 'Sick Leave' status. The ensemble is terrific, Tucci's impassioned yet brusque lawyer a standout. There are few fireworks moments, the actors maintaining masks of composure. Ruffalo is the most outspoken, Rezendes' fury spilling over. McAdams subtly lets Pfeiffer's shock seep through her eyes, replaced by compassionate sadness as her nana reads the explosive article they eventually publish. Keaton simmers as Robby's personal connections all lead to Boston's own brand of Omertà while Slattery's Bradlee must overcome his own denial. Schrieber's Baron is thoughtful and restrained. McCarthy's workmanlike production dispenses flash for substance, complemented by Howard Shore's (the "Lord of the Rings" trilogy) gently unobtrusive score. "Spotlight" lingers, though, its conclusion capped by an opening of the floodgates for those seeking answers and retribution. Unfortunately, even today as the Catholic Church embraces its popular Pope, the Boston Globe continues to report on its failure to come clean. Grade:

Writer-director Tom McCarthy, with co-scribe Josh Singer, brings the Pulitzer-prize winning story by the Globe’s Spotlight team and the nuts and bolts in their investigation of the sexual abuse scandal that proved rampant in the Boston Archdiocese and beyond. The team’s initial finding showed that several Boston-area priests, who had child molestations charges brought against them, were moved to other parishes and their abuses covered up by the highest authority in the Boston Archdiocese – Cardinal Bernard Law. “Spotlight” tells how the investigative team first learns of the victim allegations against several priests in various Boston-area parishes. The team, led by Spotlight editor Walter “Robby” Robinson (Michael Keaton), dig into the allegations and find that the child molestation and sex abuse of minors was far more frequent than first believed. Staggering to both the Catholic Church and the public, the numbers of those accused rose from the initial handful to an estimated 90, or 6% of all priests in the Archdiocese. The excellent cast is an embarrassment of riches with, beside Keaton, Mark Ruffalo as Globe reporter Mike Rezendes, Rachel McAdams as fellow reporter Sacha Pfeiffer and Live Schreiber as their boss, Marty Baron, the senior Globe editor who sparked the investigation. Stanley Tucci is superb as attorney Mitchell Garabedian, the man who brought 84 separate cases of priests’ sexual molestation of the children trusted to their ward, bringing the cases, with the help of the Spotlight team, to light. What began as a local scandal soon mushroomed to the national then international attention with thousands of past victims telling their stories. Tom McCarthy, the actor turned helmer with such fine films as “The Station Agent,” “The Visitor” and “Win Win,” shows a deft hand in directing his huge ensemble cast and telling the riveting story which feels, often times, like a police procedural as the case unfolds and expands. The Boston locations are a plus for those of us in Beantown but it is the often horrifying truth that is the draw for a broader audience.