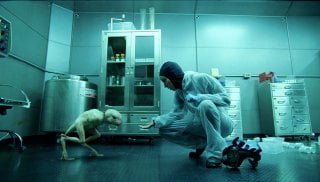 Elsa (Sarah Polley, 2004's "Dawn of the Dead") and Clive (Adrien Brody, "The Pianist") are joined both emotionally and professionally. They are the wunderkind bioengineers of a new type of life form which secretes proteins essential for treating livestock and Melinda Finch (Amanda Brugel, TV's "Paradise Falls"), the CEO who's funding them, couldn't be more excited. But even she checks their impassioned proposal to work human DNA into the experiment. Bit by bit, Elsa tempts Clive with the forbidden fruit as a secret experiment and it's too late when Clive realizes he's let Elsa go too far with their "Splice."

Cowriter (with Antoinette Terry Bryant)/director Vincenzo Natali ("Cube," "Paris, je t'aime's" vampire segment) makes a leap forward with his second feature length film, securing a place in the sci-fi/horror/fantasy genre while also exhibiting a slyly playful side, beginning with the casting of the Oscar-winning Brody and the highly respected Polley (and note their characters names, a nod to "Bride of Frankenstein's" Elsa Lanchester and Colin Clive). With its contemporary take on an age old subject and solid f/x work, this Sundance hit is sure to be one of the surprises of an otherwise dreary summer, despite a third act that manipulates motivation to force plot points and a 'twist' ending that's as clear as the nose on your face. Clive is placed under dual pressure points when his and Elsa's splice lab is shut down so the duo can concentrate on Phase 2, the productizing of their creations dubbed Ginger and Fred (Natali has fun with names - check out the labels on some of the experimental rejections in a toss away gag), while being goaded by Elsa to experiment further in secret. Elsa has been reluctant to have a child (she suggests it will happen when male pregnancy becomes possible, a concept Natali could have easily worked into "Splice," given his gender bendering premise), but she's a bit maniacal about creating one. She swears that every step she takes will be her last, but it never is. When she finally crosses the line, Clive observes their computer's assertion 'ovum inseminated.' 'F&#$,' says he. 'Exactly,' replies Elsa. It's this kind of wit in the writing that makes "Splice," at least in the early goings, so much fun and Natali adds an air of flippancy with his musical choices which range from driving rock to jazz. The enormous bio-tank, a synthetic womb, which cradles Clive and Elsa's creations, is decorated with cheesecake sticker like the nose of a WWII aircraft. Clive drives a red Gremlin. The acronym of the splice lab's name is NERD. The alarm that goes off in Clive and Elsa's apartment to signal oncoming 'birth' goes off in the middle of the night, a labor cliche. And when that happens, the film takes a turn towards the more serious, the veiny slugs that were Fred and Ginger replaced with an altogether more complex creature, arriving early due to accelerated aging, a nice device that allows the female Elsa names Dren (nerd spelled backwards and played by Delphine Chanéac) to fully develop into adulthood within a short time span. What begins as a thing with an Eraserhead noggin on the body of a tiny T-Rex becomes a humanoid with the backwards bent legs of a bird (the only f/x letdown, as Chanéac's normal thighs contort too abruptly). Natali begins to hint at a disturbed background for the epileptic Elsa which leads her into darker and darker places while the stressed out Clive, at first spooked by Dren in a little gingham dress, is even more freaked as she grows older and becomes sexually curious. Brody and Polley have an odd sexual chemistry and it is fun to watch her go into mad scientist mode as he unhinges. "Splice" is, on the whole, a trippy take on the old 'don't fool around with Mother Nature' chestnut, but Natali has characters take stands which they then reverse on without reason in order to reach his climatic showdown. Dren's development also makes illogical leaps, such as when, in a state of teenaged rebellion hidden in a barn on Elsa's mother's farm, she spells 'tedious' and 'outside' with wooden blocks. Questionable moves like these blunts his overall impact. The film's ending is at once too overworked and too obvious. Still, "Splice" has more good ideas than faults and, despite its classic theme, has an original snap to it. Too bad Warner Brothers didn't release this film a month earlier - it would have made a hell of a twisted Mother's Day movie.

Brilliant scientists, Clive Nicoli (Adrien Brody) and Elsa Kast (Sarah Polley), are on the cutting edge of genetic engineering, having succeeded in creating a new life form. Budget cuts, though, threaten their project and they must secretly move on to the next step – combine human and animal DNA in “Splice.” Part “Frankenstein,” part “Alien,” part “Rosemary’s Baby,” part cautionary tale to not mess with Mother Nature, “Splice” is an intriguing sci-fi flick that works most of the time until it reaches its telegraphed conclusion. Brody and Pauley two-hand this thriller (well, three-handed with a fascinating combo of physical acting by Delphine Chaneac and CGI to create a unique monster) with assured confidence. The actors are convincing in their conflict over having messed with God’s work – he wanting to follow the designated path for valid research, she feeling motherly instincts toward their strange creation named Dren (nerd spelled backward – you’ll get the joke when you see the movie). The oft-creepy CGI gives Dren a strange bird-like behavior that grows increasingly sinister as the plot unfolds. Director Vincenzo Natali borrows liberally from the above mentioned horror classics and creates a story that mostly satisfies the viewer but falls apart into cliché in the end. Still, getting there is a great deal of horror movie fun that will appeal to that genre’s many fans. Good, not great,