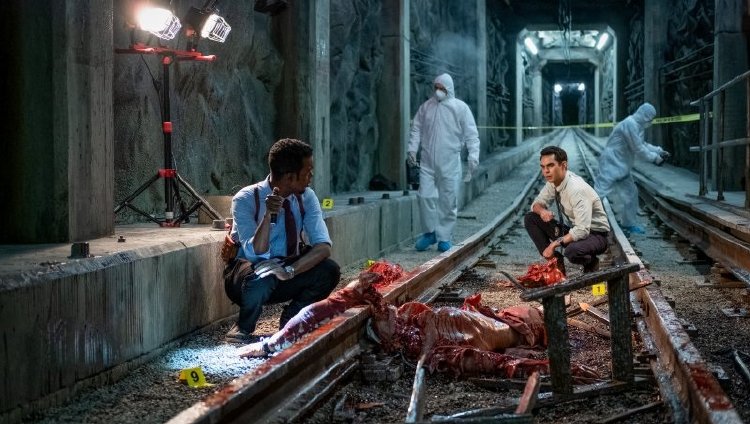 After Detective Marv Bozwick (Dan Petronijevic) is found ripped apart by a speeding subway car, his death eerily reminiscent of those committed by Jigsaw, South Metro Police Captain Angie Garza (Marisol Nichols) assigns Detective Zeke Banks (Chris Rock) and his rookie partner William Schenk (Max Minghella) to lead a citywide task force.  Zeke and his dad, retired Police Chief Marcus Banks (Samuel L. Jackson), conjecture that they may be dealing with a copycat because the murder scenes are marked with a “Spiral.”

It’s been ages since I’ve watched a “Saw” movie but the idea of Chris Rock resuscitating the franchise intrigued me.  Firstly, this is indeed a “Saw” movie with its grungy aesthetic and gore, but it’s also reaching for relevance on the issue of police reform.   "Jigsaw" screenwriters Josh Stolberg & Pete Goldfinger have both remained true to the formula, with videotaped ‘games’ issued by a moral vigilante who offers life in return for horrific self mutilation, and given it a twist, the new killer’s guise not the spiral-cheeked ventriloquist’s dummy but several manifestations of a pig, the derogatory depiction of a police officer.  Rock’s never been shy about calling out police malfeasance and with “Spiral” he won’t be making new friends with the NYPD, even as he plays an honest cop.  Oddly, race doesn’t play a part here.

Zeke realizes that the ‘homeless person’ who’s been splattered across subway tracks is an old colleague and when he gets back to the station and receives a gift-wrapped thumb drive instructing ‘Play Me,’ he’s given a clue – a spiral painted on the side of a courthouse.  Arriving on the scene, another wrapped turquoise box, bigger this time, contains a gruesome surprise – Bozwick’s tongue and his badge.  It’ll be ‘the rook’ who, having looked into police records, informs Zeke that his old pal had a bad habit of lying on the witness stand.  The new killer has a personal vendetta about corruption in the South Metro police.

The South Metro police also have a real problem with Zeke because he turned in a dirty cop 12 years prior.  In choppily inserted flashbacks, we learn that Peter Dunleavy (Patrick McManus) shot a civilian witness in cold blood and even Zeke’s dad wasn’t happy about Zeke’s actions (Angie always assures him he ‘did the right thing.’)   When Zeke’s dad stops answering his son’s phone calls, it is suggested that perhaps the missing man is the killer, enraging his son.

Unfortunately, Rock spends the entire film shouting – there is no nuance to this performance, only loudness.  We can get with him as he races against time, especially as he finds this new killer’s last two victims still living, but Rock mostly looks good because everybody else looks so bad.  That’s true aesthetically too, Detective Fitch (Richard Zeppieri), for example, always covered in a sheen of sweat and 5 o’clock shadow.  Every apartment or home is shrouded in gloom, every city street grimy.   Director Darren Lynn Bousman ("Saw's" II thru IV) maintains a decent amount of suspense and will please fans with his five traps and climactic homage to the original film, but “Spiral” lacks thematic teeth.  Its killer, who is identified, also gets away.  Prepare for more of the same.