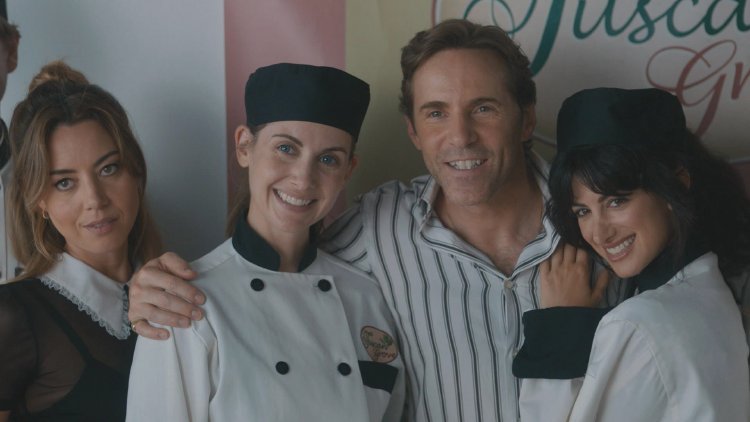 When her boss Paul (Lil Rey Howery) enters the Bakersfield Tuscan Grove franchise she manages, Amber (Alison Brie, "The Rental") and her staff don’t know what to think, but the news is great, for her anyway.  Amber is getting an all expenses paid trip to Italy to partake in the Grove's food and cultural program in its fairy tale villa outside of Pisa.  With dreams of romance in exotic locations swirling in her head about her first trip abroad, Amber is, at first, disillusioned with the experience, but when company owner Nick (Alessandro Nivola, "Face/Off") sneaks her out on his yacht, she is swept off her feet in “Spin Me Round.”

I’m assuming the locations were the draw as it is difficult to determine just what this really talented ensemble found funny about cowriter (with star Alison Brie)/director Jeff Baena’s ("The Little Hours") script.  Either that or something got lost in translation along the way, the film veering from cringey character comedy to plain old cringe.  The movie is even somewhat mean-spirited, painting anyone who would deign to manage a restaurant clearly modeled on the Olive Garden as a rube.  There are some good performances to be found here, namely Ben Sinclair’s (HBO’s ‘High Maintenance’) tyrannical program manager Craig, Zach Woods’ (HBO’s ‘Silicon Valley’) sweet naïf of chain manager and, in a small role, Fred Armisen as Nick’s friend, libertine Italian sculptor Ricky, but too often character definition is lacking or muddled.

Craig drives right past the beautiful villa they’ve all been sold on, pulling up to a barracks-like motel which will be their dismal living quarters.  He demands their passports and insists no one may leave the premises unescorted.  They are taken to local markets and given basic lectures on Italian cuisine, both activities we have already seen will serve no purpose back home at the local Tuscan Grove.  Then Nick’s assistant Kat (Aubrey Plaza, Baena’s wife) begins to try and maneuver Amber away from the rest, waking her one morning to spend the day with Nick being wined, dined and seduced.

At one point, Nick asks Amber if she’d like to be famous.  She’s taken aback by the question, answering no as she’s just an average person with no special talents.  Frankly, Amber is boring, so viewing the movie as a female empowerment tale, which it could given its finale, lacks bite.  Then there’s Molly Shannon’s Deb, one of the five other program participants, who begins the film as an intrusive whiner who takes advantage of Amber’s generosity when her suitcase is lost only to evolve into incomprehensible attitude when she buys flashy new duds, the only thing that defines her.  Shannon's 'I Love This for You' costar Ayden Mayeri is a ditz while Debby Ryan is a down home country girl.  Tim Heidecker tries and fails to make his misplaced molecular gastronomy obsession amusing.  “The Little Hours’” Lauren Weedman succeeds in creating a character as the Grove’s culinary creator, but is given no place to go.  Aubrey Plaza adds some mystery and almost succeeds in kicking the plot into gear, but she’s excised when her character becomes inconvenient.

Amber (Alison Brie) worked hard for nine years as the manager of the Tuscan Grove restaurant in Bakersfield CA. She is told by her boss that she has been selected for an all-expenses paid trip to the company’s home base in Italy for manager incentive training. But, things do not go quite as she imagined they would in “Spin Me Round.”

Director Jeff Baena co-wrote the script with his star Alison Brie and, I am sad to say, it is a mess. What starts out as golden opportunity for Amber – after all, an all-expenses paid trip to Italy and the possibility of finding love and romance is nothing to sneeze at – is not what it first seems.

The problem is, it seems to be many things – including denying the attending managers their passports and keeping them prisoner, disappearing attendees, a possible murder mystery and what appears to be a Jeffrey Epstein / Ghislaine Maxwell relationship between the company CEO Nick Martucci (Alessandro Nivola) and his assistant (procurer?) Kat (Aubrey Plaza).

The assembled actors feel just like that, an assembly of actors rather than a carefully casted group of characters. One invited manager, Deb (Molly Shannon), arrives and announces the airline lost her luggage. Amber, steeped in niceness, offers to lend the Deb in Distress some clothes. Like a switch, Deb goes from needy to demanding of Amber and spends her time taking Amber’s time. Other managers are mere background with little spent in developing characters.

The disjointed stories do not work and Nick’s intentions, apparently toward anyone in a skirt, are downright creepy – and it gets worse late in the film in an “Eyes Wide Shut” moment. What should have been a scathing satire on the Olive Garden restaurant chain – you know it is satire when the Tuscan Grove pre-packaged Alfredo sauce is pointedly shown several times – does not even approach being a lampoon. Unfortunately, it is not funny, either, but rather disgusting instead.

IFC Films releases "Spin Me Round" in select theaters, on demand and streaming on AMC+ on 8/19/22.