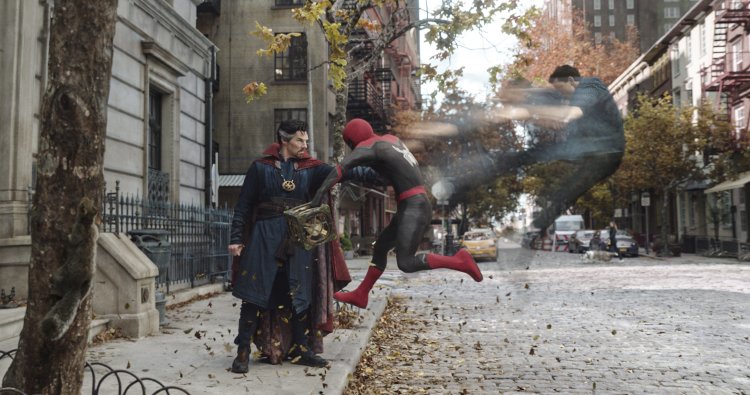 At the end of “Spider-Man: Far From Home” Mysterio (Jake Gyllenhaal) unmasked the teenaged Super Hero’s identity just before he died.  Peter Parker (Tom Holland) immediately must deal with the fall-out, rescuing MJ (Zendaya) from an increasingly hostile crowd and hiding out with his Aunt May (Marisa Tomei) in Happy’s (Jon Favreau) apartment.  After learning that the controversy has deep-sixed not only his admission to M.I.T., but also MJ’s and Ned’s (Jacob Batalon), Peter pays a visit to the Sanctum Santorum where he asks Doctor Strange (Benedict Cumberbatch) to cast a spell so that everyone will forget who he is.  Realizing his request needs fine-tuning, Peter interrupts Strange five times and the spell goes awry, ripping open holes into parallel universes in “Spider-Man: No Way Home.”

"Spider-Man: Homecoming and Far From Home" writers Chris McKenna and Erik Sommers apparently looked to the "Spider-Man: Into the Spider-Verse" animation for inspiration, their trilogy capper not only veering into the MCU, but encompassing all things Spider-Man since Sam Raimi’s 2002 film.  About the only thing they and trilogy director Jon Watts ("Cop Car") didn’t include here was a toon amidst all the live action (although there is a cheeky reference).  This is not only a trippy blast for Spidey fans, but allows the filmmakers a clean reset for moving forward.

The first sign that something is way, way off happens when Peter promises to say Flash Thompson (Tony Revolori) is his best friend in order to get access to a visiting M.I.T. official.  Finding her in a traffic jam on the way to the airport, the scene is suddenly disrupted by the mechanical appendages of Doc Ock (Alfred Molina, "Spider-Man 2"), who Peter does not recognize.  Nor does Doc Ock recognize Peter.  Peter makes points by saving the M.I.T. rep (Paula Newsome), but soon he’s also facing the likes of Green Goblin (Willem Dafoe, "Spider-Man"), Electro (Jamie Foxx, "The Amazing Spider-Man 2"), The Lizard (Rhys Ifans, "The Amazing Spider-Man") and Sandman (Thomas Haden Church, "Spider-Man 3").

The film offers the usual mix of humor (Doctor Strange’s admonitions to Peter to not call him ‘Sir’ switch back in annoyance; a last act comparison of web slinging abilities and back problems), pathos (a major character’s death; relationship struggles) and action, the latter element consuming increasing amounts of screen time.  Thankfully, the filmmakers pay attention to character development, Holland’s Peter Parker growing up before our eyes, Spider-Man taking a whole new more compassionate approach to vanquishing villains, the young actor lacing his last scene with longing, but also a mature restraint.

“Spider-Man: No Way Home” offers the now customary double dose of stingers, one of little consequence about a minute after credits begin to roll, another at the very end which is a teaser for “Doctor Strange in the Multiverse of Madness,” a movie teed up by this one.

The scoop of the century: Spider-Man is revealed, by his Daily Fix hater J. Jonah Jameson (J.K. Simmons), to be Peter Parker (Tom Holland). His new notoriety forces him to seek the help of Dr. Strange (Benedict Cumberbatch) to cast a spell on the world to forget Peter Parker. Things go even more wrong for “Spider-Man: No Way Home.”

The freshly-minted Public Enemy #1 is in even bigger trouble than just having his identity exposed. The good doctor’s spell, though intended to help, tampers with the space time continuum and, instead of fixing Peter’s problem, unleashes Spidey’s old nemeses. Now, Doctor Octavius (Alfred Molina), Green Goblin (Willem Dafoe) and Electro (Jamie Foxx) are back to make more trouble for our favorite superhero.

I am an avowed non-fan of the Marvel Comics Universe and this included the many entries in the Spider-Man franchise. But, since the very likable Tom Holland joined the Spidey-verse in 2017 with “Spider-Man: Homecoming,” I kind of developed a soft spot for the reluctant super hero. That likability quotient remains high with “No Way Home.”

Just from the anticipation of the Spidey fans I know, I expect that this latest kitchen-sink F/X extravaganza is going to get a very big draw at the theaters. The good news is, while it throws a lot of stuff at you, the fans will be thrilled with what transpires in the story-telling. And, I will leave it at that.
Of course, what we anticipate in any Marvel movie is action and banter, both of which are in ample amounts here. The CGI is as expected with variations on web-slinging and lots and lots of F/X fights. But the likable factor here is the friendship between Peter, MJ (Zendaya) and nerdy Ned (Jacob Batalon) and how they stick together – a nice moral lesson about the importance of friends for the younger Spidey-lovers.

Tom Holland is, as I said, a very likable young actor, but it is the chemistry between friends, the dangers they face together, and good natured banter that raises this up. It also helps to have familiar villains you love to hate and root against. The budget that allows all the bombast and first-rate casting is also a plus.

It is refreshing to see an MCU movie that moves away of its usual formula to spend the last 30-40 minutes throwing every special effect and fast-paced action up on the screen – mind numbingly to me. I girded myself for more of the same with “No Way Home” and was pleasantly surprised to NOT see more of the same. I am not saying why, though, you will have to find out for yourself – and let me know what you think, if you would like.