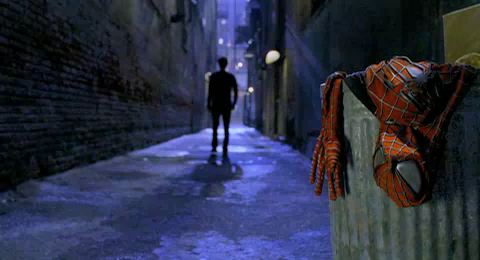 The web-swinging super hero is back but his alter ego, Peter Parker, is not in the best of shape, financially or, more important, emotionally. He is consumed by his guilt for causing his beloved Uncle Ben’s (Cliff Robertson) death then covering up the fact from his aging Aunt May (Rosemary Harris). He is unrequited in his love for Mary Jane Watson (Kirsten Dunst), fearing, if he declared his true feelings, she would be harmed because of him. He is also broke, can’t keep a job and is failing in school. Peter’s problems take a back seat, though, when his mentor, Dr. Otto Octavius (Alfred Molina), loses control of a nuclear fusion experiment and becomes the multi-tentacled Doc Ock in “Spider Man 2.”

Sam Raimi, always a favorite and a very talented film director – he created a cult following with his “Evil Dead” trilogy; showed a mirthful liking for westerns with “The Quick and the Dead”; and delved into things on the dark side with “A Simple Plan.” He entered the big league when “Spider Man” took in over $400 million domestically in its theatrical release, paving the way for the sequel. The first, while a technical wonder, pandered to those uninitiated with the Spider Man franchise of comics and cartoons. It did lay the groundwork, introducing the characters and leavened in lots of web-swinging F/X. Unfortunately, the bad guy, the Green Goblin (Willem Dafoe), was both silly and, with his demented artificial laughter, annoying. But, there was enough of the essence of the source material to keep the fans appeased with the knowledge that Raimi would do better the next time around. Guess what? Sam Raimi has taken note of all the comments and criticism made about “Spider Man” and cleaned up the act. Little time is spent on setting up the background, beyond the obligatory rehash of Uncle Ben’s demise. That was all done in the first film and this allows the sequel to examine new comic-book-turned-movie ground. Peter is in the pits. He can’t hold a job, can’t pay his bills, is constantly guilt-ridden and thinks, daily, about his love for MJ. His problems start to have a deep psychological effect on Parker and he begins to lose his spider powers. All of this has to be put aside, though, when Peter’s friend Harry Osborn (remember, he is the son of Norman Osborn, AKA the Green Goblin, who blames his father’s death on Spidey and wants revenge), introduces him to Dr. Octavius, a genius on the verge of demonstrating his invention, a fusion device that can produce clean, safe, unlimited energy. When the city’s dignitaries attend the gala demonstration, things go drastically wrong and the doctor becomes the eight-limbed mutant, Doc Ock. The film consists of a series of battles between Spider-Man and Doc Ock, interspersed with revelations that help develop the Peter Parker character and move him on to the next in the lucrative franchise. While there are expected and hoped for kickass special FX (and I’ll get to them shortly), the strength of “Spider Man 2” lay with the actors, especially support, who give far more dimension than a film like this has a right to. Tobey Maguire has been criticized as too much of a geek in the first “Spider Man.” (Go figure. Parker is a geek in the comic books, too.) But, his aw-shucks demeanor and vulnerable looks help build the character of Peter Parker. Kirsten Dunst is a pretty little object of attention for Peter but found her to be a bit too shrill in her confusion over Peter. Hers is not an easy role and the actress is attractive and game for the physical aspects of being MJ. Alfred Molina, an actor I have respected for many years since “Letter to Brezhnev” (1985), gives just the right spin on both sides of the good doctor. He is a warm, loving genius that adores his wife, Rosalie (Donna Murphy), until the horrible accident that killed her and turned him into a monster. Molina plays it straight with little touches of humor to give Doc Ock dimension. Rosemary Harris was solid in the first as Aunt May but, here, gives even greater depth to her character, making the lady real. James Franco is saddle with his grief/revenge obsessed Harry who drinks too much and wants to destroy the S man. J.K. Simmons blesses his tabloid publisher character with a well-honed, fast-talking perf that is the personification of J. Jonah Jameson. Sam Raimi and company have spent a lot of time and effort in cleaning up their act, F/X wise. The obvious CGI of the first film has been improved to make the web-swinger's action blend in with the city life. The rubbery look of the CGI Spidey the first time around has been improved to (almost) realistic quality. The set battle pieces, between the arachnid and the mollusk, are fast, fun and furious. The opponents are equally matched with Spidey countering Doc Ock’s power and monstrous strength with speed and agility (and you know good triumphs over evil). A bevy of writers – Alfred Gough, Miles Millar, Michael Chabon and Alvin Sargent – took part in adapting the original comic book work by legend Stan Lee and Steve Ditko. I normally don’t care for scripts by committee but it works here. They must have shared the work with one writing the action, and others doing the romance, revenge and sequel setup. Whatever the method, they have a not overly bloated screenplay (it could be shorter) that keeps thing moving. Techs are a good melding of traditional F/X and stunts in a seamless manner with the computer generated action. Bill Pope lends his expert lens to the behind the camera team. Special effects, by the expected huge team directed by John Frazier, are top notch and denote the money spent. Other techs match up well, too. I think Sam Raimi can loosen his tie and kick off his shoes. He done good.