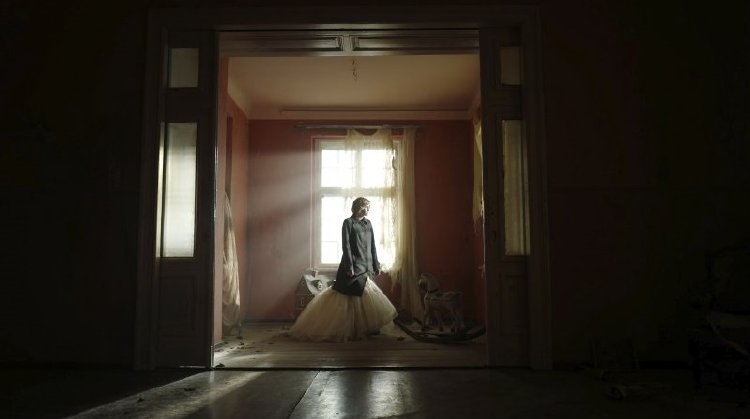 After ten years with the royal family, the Peoples’ Princess was decidedly not looking forward to the traditional three day Christmas celebration at Sandringham House.  Befitting her sobriquet, Diana has more genuine connections with the household staff than its residents, her real joy found in time spent with her sons.  Desperate to escape the rigid traditions of royalty, Diana flees across a field under cover of night for a nostalgic trip back to the boarded up estate of “Spencer.”

It is a sign of a strong performance when we forget that we are watching the actor giving it, something Kristen Stewart accomplishes within the opening minutes of this fictional psychological portrait of the iconic Princess of Wales.  Peaking up from beneath a blonde bob styled just so and speaking in the clipped, breathy voice that gave Diana an air of ethereality, Stewart creates a woman resorting to a form of madness that is her only freedom from a gilded cage.  If the movie itself isn’t quite up to the talents of its star, she compels us throughout.

Director Pablo Larraín’s ("Jackie," "Ema") is capping a female trilogy of sorts in his sociopolitical filmography, but this film, like his recent “Ema,” takes liberties with reality, Steven Knight’s ("Locke") screenplay imagining Diana’s inner turmoil.  The royal family itself is mostly oppressive window dressing, the Queen (Stella Gonet, TV's 'Breeders') only delivering a few lines, Charles (Jack Farthing, TV's 'Poldark') tussling with his wife over making William (Jack Nielen) join a pheasant hunt he doesn’t want to when not lecturing her about duty, the latter speech seeming woefully dated within Knight’s own time period.  There is a pacing problem here as well, the film repeating its themes when it should be wrapping.

The opener sets the stage, Sandringham’s larder stocked by the military with regimented precision, Head Chef Darren (Sean Harris) commanding his own staff transition with parallel rigidity.  Those crates overflowing with lobsters and other delicacies combined with the traditional scale ‘check-in’ conducted by Major Alistar Gregory (Timothy Spall), a ‘bit of fun’ equating added poundage on leaving with a successful weekend, is the bulimic Diana’s first nightmarish obstacle.  As this occurs, we see Diana, driving herself toward Sandringham in a sporty Porsche but getting lost in an attempt to find her old family home, her lateness an obvious bone of contention.

The film leans on symbols – a beloved old scarecrow named Bertie wearing Diana’s dad’s old coat, the ‘pretty but dumb’ pheasants ‘bred for the gun,’ Charles’ Christmas gift of the same pearl necklace going to both Diana and Camilla Parker Bowles (Emma Darwall-Smith), the heavy bedroom drapes Diana is chastised for leaving open (photographers) which are literally sewn shut, the ghost of Anne Boleyn (Amy Manson) – and Diana’s small rebellions.  The oppression and claustrophobia of these three days register loudly and clearly when we witness Maggie (Sally Hawkins) rolling a full clothes rack down the hall, each outfit labeled with the time and day it should be worn.  And yes, when Diana switches things up, she’ll actually hear about it.  And when her dresser Maggie, someone Diana considers a friend, is sent back to London, Diana demands her return (and will be thanked by Maggie with the gift of love, shocks and laughter).

On Christmas Day Diana secretly breaks tradition with gifts to William and Harry (Freddie Spry), both having questioned why they have to open presents the night before unlike ‘normal’ people.  Christmas night features Diana’s getaway (‘I need a pair of Wellies and a torch.’), where she sinks into the dilapidated stairs of the Spencer estate on the way to her childhood bedroom, dancing about hallways with younger versions of herself.  But Boxing Day brings her ultimate, maternal rebellion, posing as one of those ill-fated birds.

Stewart is mesmerizing throughout, her own fashionable self transformed in Jacqueline Durran’s (“Atonement”) recent period costumes ranging from formal wear to jeans.  Her glum expression reflects a prisoner, bursting into radiance in moments of freedom.  (It is amusing that the star of the sexually provocative “Touch Me Not,” Laura Benson playing Maggie’s replacement, is goaded with Diana’s most outrageous comment.)  Oddly, Director of Photography Claire Mathon’s ("Portrait of a Lady on Fire") work here features a milky sheen which makes some scenes look washed out.  Jonny Greenwood’s ("There Will Be Blood," "Phantom Thread") spiky, atonal jazz score perfectly captures Diana’s head space.  “Spencer” the movie isn’t a slam dunk, but Larraín’s unusual approach brings a breath of fresh air into the genre.